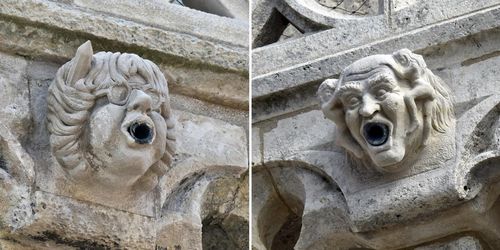 This from Hyperallergic - A pair of gargoyles commemorating slain Charlie Hebdo cartoonists Jean “Cabu” Cabut and Georges Wolinski were unveiled Monday on the renovated exterior of the Tour de la Lanterne, a tower in La Rochelle whose oldest sections date back to the late 12th century. The two figures — Cabu sporting his distinctive round glasses and a large pencil tucked behind his ear, Wolinski looking markedly more surreal with his wide-eyed expression and two miniature female nudes flanking his face — are an unexpected contemporary addition to the medieval tower, whose exterior has just undergone a €1.15-million (~$1.32 million) restoration.

“As part of the restoration work two of the gargoyles were due to be recreated,” Frédéric Henri, the adjunct administrator of La Rochelle’s three historic towers — the Tour Saint-Nicolas, Tour de la Chaîne, and Tour de la Lanterne, all of which are managed by the Center for National Monuments — told the AFP.

“After the attack of January 7, [Center for National Monuments chief architect and project director for the renovation] Philippe Villeneuve had the idea for these emblems on the exterior of a building once used as a prison to pay homage to them and all threatened artists around the world. He didn’t tell anyone about it, but once he unveiled them, nobody objected.” It is unclear whether impromptu contemporary tributes during historic restoration projects are part of the mission of the Center for National Museums, or merely an allowance afforded to its chief architect.

The Tour de la Lanterne served as a prison in 1822 for the Four Sergeants of La Rochelle, a group of young soldiers who were accused of plotting to overthrow the French monarchy following the Bourbon Restoration. The soldiers were guillotined on September 21, 1822.

Villeneuve’s rogue renderings of the cartoonists killed during the terrorist attack on Charlie Hebdo‘s editorial offices can be spotted high up up on the tower, at the level of its second balcony, with the Cabu gargoyle projecting from its northeast side and the Wolinski gargoyle looking down from the southwest side. 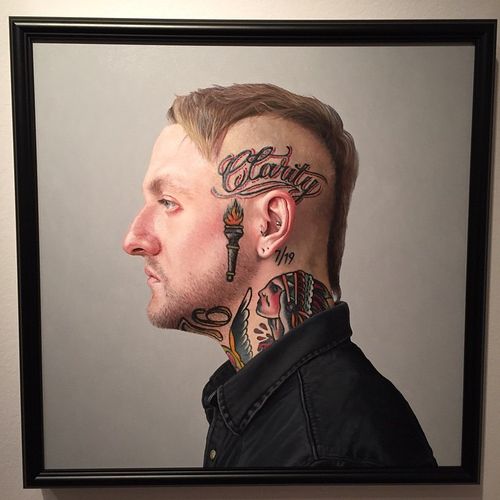