There is something interesting happening in Queens.

Artist Michael Neff has created a Suspended Forest, built from the many discarded Christmas trees currently littering the sidewalks of New York. Neff has done this before, under the BQE, but this time he's got a legal space to display the arborcide in—no longer in the open air, the space is stuffed with the scent of pine and death. These were all collected in Brooklyn and installed a few days ago at the Knockdown Center in Maspeth, Queens, where they will remain for the month of January. Behold, your discarded Christmas trees and yuletide joy are now art.

Activists and Residents Light Up Bushwick with Anti-Gentrification Signs

A big bravo to the artists of Bushwick on this effort to stem the gentrification of their neighborhood. What happened to WIlliamsburg should not happen in Bushwick. Let's keep it real. 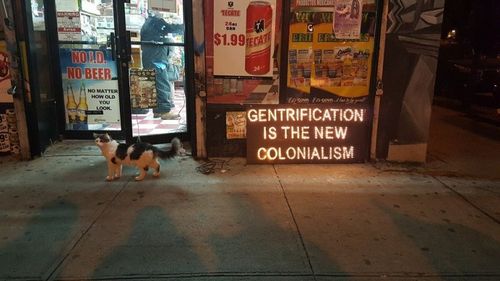 Since Christmas Eve, some lights along the streets and in the houses of Bushwick have spelled out a number of messages quite different from the festive wishes one usually finds during the holiday season. “GENTRIFICATION IS THE NEW COLONIALISM,” “NOT 4 SALE,” and “NO EVICTION ZONE,” some read. Found around major streets and intersections, the signs are part of “Mi Casa No Es Su Casa: Illumination Against Gentrification,” a community resistance art project to give voice to those concerned with the gentrification of their neighborhood and threats of displacement. The project, organized in conjunction with social justice group NYC Light Brigade, was spearheaded by longtime Bushwick resident Pati Rodriguez, who said she and her family are “tired of being harassed by developers and real estate agents looking to buy us out of our home in Bushwick to displace us, just like they did with most of my childhood friends.” The signs, 21 in total, all glow with firm declarations of tenacity against such intimidation techniques. Lights that read, “3 GENERATION HOUSEHOLD” make clear that buildings are not just portions of real estate up for carving, but homes; others say, “NO ME MUDO” (I’m not moving”), reminding passersby of the ever-present possibility of families being forced from their residences.

“We’ve had a good mix of long-time/native New York tenants, homeowners, and businesses who are currently displaying the signs,” activist Will Giron — who led protests this year against the Bushwick Flea — told Hyperallergic. “We hope that the signs not only raise awareness about the displacement of people of color in the community due to gentrification, but we also hope that the signs makes it clear that we are fighting back.”

The collective lighting, which ends today, is the culmination of a six-week-long project that involved a community workshop to create the signs. Made with trails of Christmas light bulbs, the new signs repurpose decorations that usually spread holiday greetings to instead spell out struggles in a jazzed-up version of a protest sign. The very blatant results may breed unease, but they certainly attract the eye.

“​Our project’s message is very clear,” long-time Bushwick resident Bianca Perez said. “We are here, we have been here, we matter, and we will make sure YOU are aware of that.”

The Top 15s According to Brooklyn Street Art