The most recent Brooklyn Street art newsletter for your reading pleasure.

If you are a New Yorker feeling the burn it could be the Hasidim who lit fires every two blocks in parts of Brooklyn Friday to mark Passover (see our final image). The smoke and ash were staining sidewalks and wafting through neighborhoods until being washed away with the Purple Rain Friday night, or maybe […]

Reply, Reply All or Forward | More

What exactly is Sneak a Peek? Well, try to remember that feeling of catching a strange indoor scene through a neighbor's window. You're not exactly spying, yet not exactly innocent; New York is a city of ambiguous voyeur guilt. Sneak a Peek plays off of this phenomenon with televisions specifically displayed in windows along Ninth Avenue and West 22nd Street. Curated by Lal Bahcecioglu, the screens each display the work of a separate artist and are meant to be happened upon by chance. Then again, a list of their locations is available right here, and there'll be an "opening" reception Thursday night in front of the Chelsea Florist on 8th Avenue and 22nd Street. Go ahead and get your creep on. Free 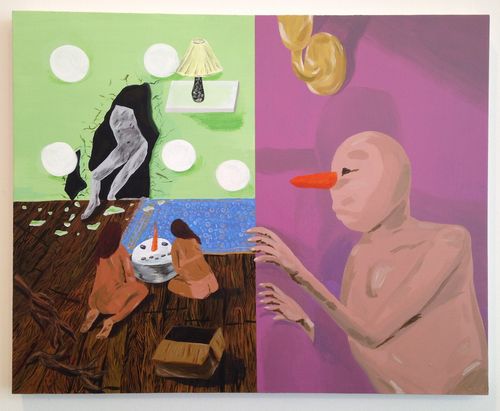 Bushwick Open Studios, a decade long open studio weekend, is moving from the summer month of June to October - and with good reason. I love going to see all of the great art going on in Bushwick and the chance to enter some artist workspace makes BOS a must do.

Unfortunately, many real estate developers think so too and the summer months are the time when real estate is easily bought and sold and these people can blend into the general artsy crowd. October is less so and those who come to celebrate the art and the neighborhood AS IS can do so in October.

It’s been 10 months since BOS2015. Remember how insane it was? VIP parties, brands and billboards everywhere, Chris Rock selfies, even Fat Joe singing at a block party. “Baby Basel–esque,” you might have called it. But … you know most of that had little to do with Bushwick Open Studios, right? The agglomeration of mostly unaffiliated events the weekend became known for was because BOS — and Bushwick itself — have become twin magnets, drawing events that drew still more events. A lot of these do fit under the expansive Arts in Bushwick umbrella and were created by friends and allies, but many others were just hangers-on.

And it’s not just other art events and parties that have begun capitalizing on BOS’s popularity. During the meeting, AiB volunteer Nicole Brydson shared a rather ominous reason some AiB members voted for the October dates: the sentiment they’d heard expressed that “real estate is sold in the summer, art is collected in the fall.” In other words: summer open-studio events are ideal browsing conditions — if you’re shopping for real estate. Whereas fall events can be more studio-focused and conversational, so, ostensibly, real-estate types would have a harder time blending in. This from Hyperallergic -- On Saturday afternoon, sand sculptor Zara Gaze came upon a pile of sand at a construction site in her rapidly gentrifying south London neighborhood of Brockley. Where most saw yet another overpriced high-rise in progress, Gaze saw a blank canvas. Later that night, she returned to the site with a spade and transformed the 40-ton sand pile into a piece of anti-gentrification protest art: A sculpture of a fat cat chewing on a piece of broccoli (get it? Brockley?).

At 3:30am, a security guard showed up at the site and questioned Gaze about her renegade creation. She said she’d merely rearranged the sand that was already there. Before they destroyed her masterpiece, they let her photograph it.

“The place used to be an old garage and somebody had daubed graffiti — ‘enjoy your quinoa,’” Gaze told the Guardian of the construction site. “I think it’s going to become flats that cost a ridiculous amount of money. I was on my way to a friend’s house and thought it too good an opportunity to miss.”

Sand sculpture is usually the purview of beachgoers, not urban protesters, but Gaze, who runs the sand art initiative Sandalism, aims to politicize the medium. She often works in the dark of night, sneak-attacking construction sites and turning them into everything from giant sand brains to pumpkin patches, but making overt protest art is new for her. “I feel like getting more political. People are pretty miserable at the moment, they are really pissed off at the government, so this is a call to other artists. People are not shouting enough,” said Gaze. “It’s very difficult to live in London and many people I know are making noises about moving out of London.”