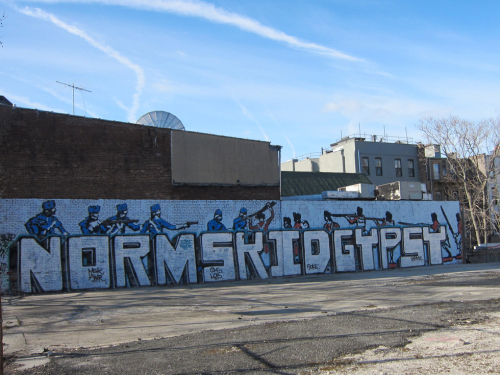 According to Altas Obscura, buried in a mass grave near the Gowanus Canal in Brooklyn are the remains of the 1st Maryland Regiment, a group of brave soldiers that changed the course of the Revolutionary War. This place is marked with a beautiful street art mural.

The Maryland Regiment was integral to the Battle of Brooklyn on August 27, 1776. Vastly outnumbered against a force of 2,000 British, "The Maryland 400" as they became known bravely charged against the enemy, holed up in the Old Stone House, six times so that the rest of Washington's army would have time to escape. Only 10 returned to American lines, and 256 were dead, with another 100 either injured or taken prisoner.

The Maryland soldiers killed in the struggle were interred in a field in six trenches, an area that eventually became Third Avenue in Gowanus. Their grave was originally marked with a memorial that stated: "Burial place of ye 256 Maryland soldiers who fell in ye combat at ye Cortelyou House on ye 27th day of August 1776." Yet as the years went by, their story and burial place faded from public memory.

However, not everyone has forgotten the Maryland Regiment, and their grave has been rediscovered where it remains in a fenced-off lot at the intersection of Third avenue and 8th Street in Brooklyn. Despite previous plans for a memorial park, merely a simple placard on the adjacent American Legion building indicates the site from the street.