Take a trip around the world with these artists.

In this three-part series, artnet News aims to find the best and brightest street artists working today, from known entities to emerging artists flying under the radar. See Part I here and Part II here.

21. Maupal
His works may get washed off the walls of Rome within hours, but the Italian street artist still manages to make noise with his pointedly hopeful depictions of Pope Francis, most notably as “Superpope.” So You Think You Can Draw Pope Francis: Take a Look at These Portraits 22. Meres One
The visionary mind behind the former graffiti mecca 5Pointz in Queens, New York, Meres One is so dedicated to his craft that his personal motto is “I don’t do graff, I am graff.” 23. Mint & Serf
The brothers may have lamented the loss of the “underground element” of street art to artnet News’s Anthony Haden-Guest in 2015, but that didn’t stop them from having a secret pop-up exhibition at a condemned New York parking garage. Olek crocheted a covering for this obelisk in Santiago, Chile. Courtesy of Olek.

24. Olek
Olek’s crocheted creations aren’t what one normally thinks of when one hears street art—all the more reason that her brightly-colored work is exciting for breaking open boundaries. Whether she’s adorning the Astor Place Cube with her creation or creating an astonishingly large billboard supporting Hillary Clinton, Olek’s work is surprisingly at home in an urban setting. A mural by REVOK. Courtesy of REVOK.

25. REVOK
Sometimes street artists don’t survive the transition to the gallery, but Los Angeles graffiti legend Revok is finding new ways to push the medium, showing in the white cube with the city street signs he once painted illegally, now purchased from the manufacturers. LA Graffiti Legend REVOK Crosses Over to the White Cube 26. Kenny Scharf
On the scene since the early 1980s, Kenny Scharf may have traded the grit of New York’s East Village for laid-back Los Angeles, but his street art work is still no less essential. 27. Slinkachu
Forget in-your-face murals and graffiti—Slinkachu is all about subtlety, with miniature street installations that play on scale and setting in delightful ways. A mural by Stik. Courtesy of Stik.

28. Stik
The appropriately-named Stik elevates the stick figure to an art form, imbuing his colorful works around London with socially-conscious messages about empathy and unity. A work by Swoon. Courtesy of editrrix via Flickr Creative Commons.

29. Swoon
The queen of wheatpaste, Swoon, creates gorgeous portraits that slowly decay over time. In 2014, the New York-based artist broke into the art world with a large-scale installation at the Brooklyn Museum, and has been gaining ground ever since. 30. VHILS
The Portuguese street artist stands out from others in the field by eschewing the spray paint can in favor of chisels and power drills, carving dramatic relief sculptures into the sides of buildings.

In this three-part series, artnet News aims to find the best and brightest street artists working today, from known entities to emerging artists flying under the radar. See Part I here and Part III here.

11. James Goldcrown
In 2015, James Goldcrown became an Instagram sensation with his piece Lovewall, a spray-painted mural of dozens of bleeding hearts. Versions of the New York artwork have since popped up around the country. Logan Hicks, Story of My Life. Courtesy of Logan Hicks.

13. Logan Hicks
The photo-realistic work of street artist Logan Hicks becomes all the more impressive when you realize he creates it using hand-cut paper stencils. Invader, Space2 on board the International Space Station. Photo: Invader.

15. Invader
The French street artist Invader has gotten remarkable mileage out of his pixelated-looking works, inspired by vintage computer graphics from Space Invaders—he’s even sent his work to the International Space Station. 16. JonOne
With his unique brand of Abstract Expressionist-tinged graffiti, influenced by the likes of Jackson Pollock, JonOne has been blurring the line between the street and the gallery for decades. 17. JR
The French street artist takes photography to the streets with large black-and-white images that, more often than not, are portraits from people around the world; they serve as a reminder of how much we have in common with each other. 18. Kashink
Defying gender roles both in her art and in life, Paris’s Kashink draws a mustache above her lip each day. Her rejection of traditional standards of beauty extends into her work, which features large, expressive, four-eyed faces in an array of colors and textures. A mural by KAWS. Courtesy of KAWS.

19. KAWS
Another crossover success, KAWS parlayed his brightly-colored cartoon-like forms from the streets of New York to major museums, which now show his work in painting and sculpture, along with his street art. 20. Lady Pink
Street art pioneer Lady Pink led the way for female graffiti artists, getting her start on New York city subway cars way back in 1979, when she was just 15. Decades later, she is a major figure in a still-male-dominated field.

For those of us who really follow street art, we all have our own list of favorites but Artnet has composed a list of their own. Billed as the Top 30 Most Exciting Street Artists Right Now - Part One, the list includes a few of my personal favorites too. 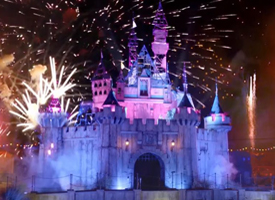 Certainly Banksy should lead the list with his Dismaland in 2015 in Britain and his mysterious and gleeful month in NYC where you never knew where his next creation would appear. 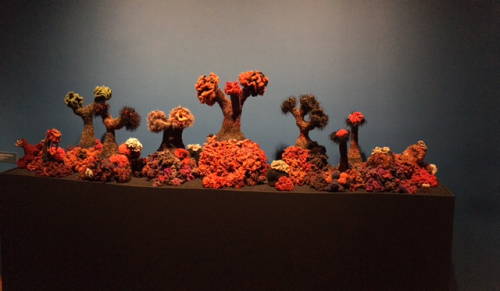 Part political statement, part amazingly intricate and beautiful crochet sculptures, Crochet Coral Reef is something to be seen to be believed at the NYC Museum of Design.

To me it is a bit of yarn bombing and total whimsy with a political punch.

The exhibit celebrates the tenth anniversary of the “Crochet Coral Reef” (2005–present), an ongoing project by sisters Margaret and Christine Wertheim and their Los Angeles–based organization, the Institute For Figuring.