140 Essex Street in NYC this Weekend 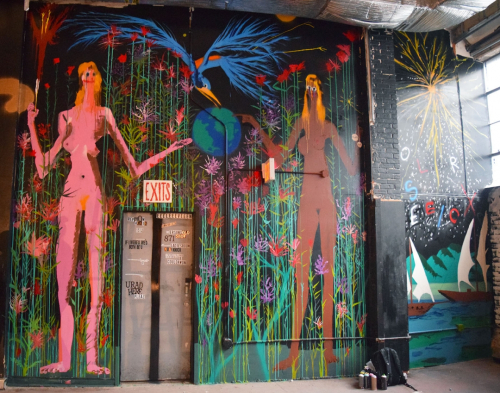 According to Hyperallergic - Before it’s razed, 140 Essex Street is hosting a one-weekend exhibition featuring 10 murals by 10 artists.

The low warehouse building at 140 Essex Street on Manhattan’s Lower East Side is not long for this world. The former site of the Essex Street Market and, more recently, host to a mockup of the subterranean park the Lowline, will soon be leveled to make way for an apartment building that is part of the Essex Crossing mega-development. But before its walls meet the wrecking ball, they are being filled with murals.

This weekend, 140 Essex Street will reopen to the public one last time for Market Surplus, an exhibition featuring murals by 10 artists who’ve filled the building’s 20-foot-tall walls. Organized by Hanksy, the show features an international slate dominated by renowned street artists, including Pixel Pancho, Elle, Faust, Sonni, and more. When I visited the raw, cavernous space last night, many of them were still hard at work on their murals — the building only became available at the end of last week — but several were already finished and ready for tonight’s opening celebration.

“A lot of the artists are making murals inspired by the neighborhood,” Hanksy explained. Some of the references are fairly overt, like Sonni’s popping, stylized rendering of the local cityscape replete with rooftop revelers and water towers. Others are much subtler in their Lower East Side homages; for instance, the artist NDA used to work at the Essex Street Market and, during a recent visit, struck up a conversation with the butchers near his former stall. His mural is a giant portrait of them.

Most poignant, perhaps, is Faust’s mural of golden, elegant script, which reads: “This will never last.” It speaks not only to this building’s imminent disappearance, but to the cycles of demolition and construction reshaping this neighborhood yet again.