Get to the Bronx on August 10th 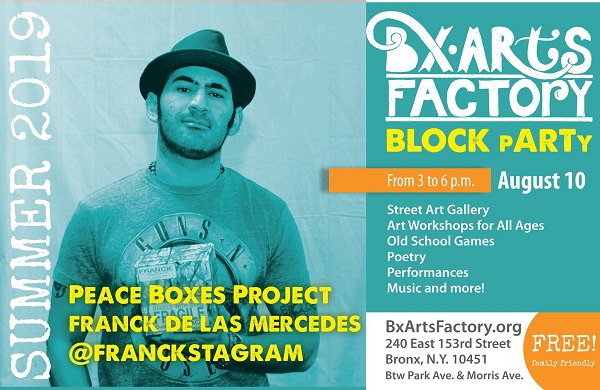 New York, August 2019 -- BxArts Factory is a grassroots, non-profit organization connecting Bronx-based creatives and community through the arts. The Factory sponsors art exhibitions, workshops and educational programs in the Bronx and collaborates with artists, other organizations and local businesses to strengthen ties to the community and increase community engagement with the arts.
Founded in 2014 by Bronx local artist Laura Alvarez, community activist Twahira Khan, Alexis Mendoza - founder of Alexis Mendoza Curatorial Projects, and community organizer and educator Yolanda L. Rodriguez; BxArts is launching it's first annual Block Party outside of their new space in the Melrose community of the Bronx. On Saturday, August 10th, from 3-6pm, this event celebrates the success of the organization as a Bronx-based community creative resource and share plans for the future at their newly acquired space.

Joining the celebration will be BxArts Factory current resident artist, Franck de las Mercedes, internationally recognized for creating  conceptual works and colorful abstractions. Franck will be leading a Peace Boxes painting workshop with block party guests of all ages. Since 2006 The Priority Boxes art project has achieved international acclaim as a public project that promotes peace through participatory art while seeking to initiate dialogue on peace, challenge people to reconsider their ability to influence change and question the fragility, value and priority given to those concepts. Each box is both a canvas for a unique abstract painting and a platform for communication through art.

"I am honored to be collaborating with the community and to be the recipient of this Artistic Residency with BxArts Factory. I look forward to the next 3 months creating a community-based body of work and the exhibit at the end of the residency program. I'm also happy to see the comeback of the Peace Boxes, by way of workshops. This is already an enriching experience and it is my wish that the community will also be enriched by my participation." says FdlM
This event is free to the public. BxArts Factory is inviting everyone to come take over the block with family and friends and enjoy a day of music, art, games, poetry and performances for the whole family to enjoy.

ABOUT FDLM:
Franck de las Mercedes is an artist living and working in Washington
Heights, New York City. In 2006, de las Mercedes achieved international acclaim with his conceptual art project “The Priority Boxes" or Peace Boxes; conceived as a way to
promote peace and  bring contemporary art to a broader audience.  FdlM
is the recipient of an  “Outstanding Latino” award, the “Hearing Our Voices” award and is profiled in the book titled “Learning from Latino Role Models: Inspire Students through Biographies, Instructional Activities, and Creative Assignments” by David Campos (Rowman & Littlefield Publishers). Named one of Complex magazine’s “15 Artists About to Dominate 2015”, Franck has participated in numerous national
and international exhibits including The Fabergé Big Egg Hunt New York, The NY Museum of Modern Art’s “Abstract Currents”, Sing for Hope Pianos 2017, BKLYN Designs, Naples Museum of Art, Folklore Museum of Tripotamos Greece, The National of Ireland, Ireland and The French Institute Alliance Française. His art is part of private and public collections around the world, including a portrait of Francisco de
Quevedo which was acquired by Fundación Francisco de Quevedo. More info: fdlmstudio.com

Who owns “love”? It’s a question posed by Julian Rivera, a street artist known for his signature heart symbol surrounding the word, in a lawsuit against Walmart and celebrity TV host Ellen DeGeneres. He claims the company and media personality appropriated his signature design for a line of apparel.

Earlier this year, the retail giant released a clothing line made in collaboration with DeGeneres called EV1. Each piece featured a heart logo that rounded off into a cursive “love” at the bottom. The design bears a striking resemblance to Rivera’s own, which he often uses as a signature on his artworks and apparel, much of which is sold through an online shop.

In a complaint filed in a California District Court this week, Rivera’s lawyer, Jeffrey Gluck, accused the company of copyright infringement, demanding that they remove the items from their shelves and pay monetary damages.

The use of the design is “particularly damaging,” the complaint states, “because Rivera has carefully avoided any association with corporate culture or mass-market consumerism.”

“Despite offers, he has very rarely made his original art available as part of corporate advertising campaigns—partly for artistic reasons but also because doing so would diminish the value of his work,” the complaint alleges. “Indeed, nothing is more antithetical to a street artist’s credibility than association with mass-market consumerism—of which Walmart is the epitome. People who recognized his design in the EV1 Collection would have concluded that Rivera ‘sold out,’ diminishing the value of his work and reputation.”

Apparel from Walmart’s EV1 line, made in collaboration with Ellen DeGeneres.

Rivera first brought the issue to the company’s attention this May, according to the complaint. After stating on multiple occasions that they “needed more time to investigate the matter,” Walmart’s attorney’s issued a full response to the artist this month, claiming that they had not copied the work, that their design was significantly different, and that—according to the complaint—Rivera’s logo “reflected no appreciable creativity.” The case may ultimately hinge on the court’s determination of the uniqueness of the “love” symbol.

Rivera’s lawyer, Gluck, has represented a number of designers and street artists who have allegedly been ripped off by corporations. In 2016, he represented the estate of Dash Snow in a lawsuit claiming McDonald’s used the late artist’s “SACE” graffiti tag in a marketing campaign. Before that, he helped the street artist RIME bring a case against Jeremy Scott for supposedly copying one of Rime’s designs for a Moschino clothing line. Earlier this year, Gluck fought on behalf of a graffiti artist whose illegal street painting was used as a backdrop in an H&M ad.

Gluck did not immediately respond to request for artnet News’s request for comment on the Rivera suit.