Keith Haring's Crack is Wack is Back 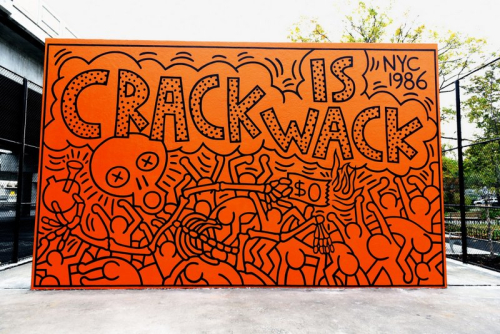 Exciting news: Keith Haring‘s Crack is Wack mural on the handball courts in East Harlem is now fully restored. It’s been a while since New Yorkers have seen the mural — it was under protective covering for four years during road construction and had been undergoing a restoration since August. The beloved mural, which served as a warning to crack cocaine addiction, has undergone numerous paint overs and repaintings since it was first created by Haring in 1986. The first paint over came shortly after Haring finished the work, prompted by the Parks Department. Haring was fined, but later asked to recreate the mural. The mural has had several more repaintings since, most recently in 2012. This means the original mural the artist did was lying beneath layers and layers of paint.

A full restoration, sponsored by the Keith Haring Foundation began in August. Over the last few months, artists Louise Hunnicut and William Tibbals stripped the mural down on both sides of the wall, located parts of the original mural under multiple layers of paint, and precisely traced the original work. After, the wall was patched up and sealed, with several base coats of fixative applied on top and base coats of color-matched paint. And finally the mural was recreated, using both the tracings and historic photographs.

“The ‘Crack is Wack’ mural is a testament to the enduring power of Haring’s art, which arose first in public spaces,” said NYC Parks Director of Art & Antiquities Jonathan Kuhn. “We are grateful to the conservators and the Keith Haring Foundation for its continuing support to preserve this mural’s vibrancy and flair for all to see.”

“We are thrilled that ‘Crack Is Wack’ has been restored to its original glory,” said Keith Haring Foundation Acting Director and President Gil Vazquez. “It is a huge source of pride for our city and a lasting reminder of Keith’s legacy and political activism. We’d like to thank the Parks Department for its stewardship of the mural and park as well as Louise Hunnicut and her team for the great work on the restoration.”

Keith Haring died in 1990, at 31 years old but left behind a visual legacy that continues to resonate today. His other large scale works in New York City include a mural at the Carmine Recreation Center pool in Soho, at the LGBT Community Center in Greenwich Village, and in Woodhull Medical Center in Brooklyn.

Next, check out 8 places to see Keith Haring’s work in NYC.