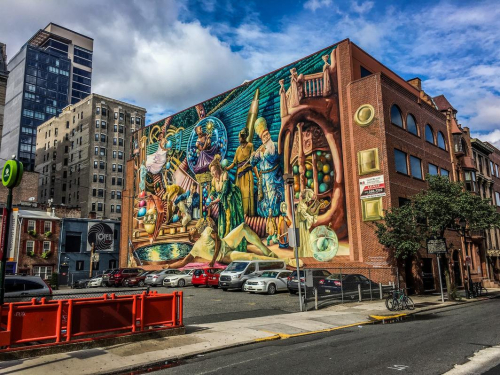 I can understand the terrible choices city administrators must make in the wake of COVID-19 but defunding the arts is an area where I think we should reconsider. There must be other options like getting wealthy donors in Philadelphia to help assist the arts at this time, providing, perhaps, services to children who are at home and out of school. Philadelphia boasts a wonderful murals project and is also the home of mosaic artist Lazar whose home and workspace, The Magic Garden, delights and attracts many visitors.

Philadelphia Mayor Jim Kenney has eliminated the city’s Office of Arts, Culture, and the Creative Economy, slashing funding for the arts by $4 million, in his proposed $4.9 billion budget for the 2021 fiscal year. If the budget is passed, defunding the agency would also mean that the Art in City Hall exhibition program, the Percent for Art program, and the Philadelphia Cultural Fund would cease operations, ending grants and financial support to hundreds of artists and cultural organizations.

“These programs provide invaluable service to artists and arts organizations, and it’s a tragedy that they have all been deleted—STARTING JUNE 1, 2020—presumably since art is ‘non-essential,’” reads an open letter published by the online publication Artblog, which covers arts and culture in the Philadelphia region. “This proposal sends a horrible message about how the arts don’t matter in Philadelphia and more to the point, it implies that the arts have nothing to offer the community at this time, when we know the arts are helping many of us get through the pandemic.”

A petition to save the city’s arts funding body, which had more than 5,400 signatures at the time of publication, has been launched on change.org. Organized by Philadelphia’s Internet Radio Community, iradiophilly, the campaign acknowledges the hardships facing the city as it tries to recover from the economic turmoil ignited by the Covid-19 outbreak, but it calls the decision to shut down an office that “supports vital industry in the city of Philadelphia, especially one that has been hit hard during this crisis,” as “short sighted” and demands its reversal.

In defense of the budget plan, Kenney cited the economic fallout from the coronavirus pandemic and told the Philadelphia Inquirer that the “drastically revised” proposal for the coming fiscal year prioritizes “core municipal services.” Mural Arts Philadelphia will still be funded but will be allocated just over $2 million—a decrease from the $2.45 million it was previously awarded—and the Philadelphia Museum of Art, which is housed on city property, will also see its budget reduced from $2.55 million to a little more than $2 million.

According to the Greater Philadelphia Cultural Alliance, the arts and culture sector injects $4.1 billion into the local economy annually and supports 55,000 jobs. In response to the news, Maud Lyon, president of the Greater Philadelphia Cultural Alliance, called the moment “difficult and extremely distressing” in a letter to prominent arts leaders in the city. “We know that many of the recommended cuts and funding reductions will tear into the essential fabric that makes our sector so vibrant and diverse.” She added that the loss of the Office of Arts, Culture, and the Creative Economy and the Philadelphia Cultural Fund has the “potential to destabilize our community in a way we have never experienced.”

Philadelphia’s City Council approved a $5 billion budget for the 2020 fiscal year, a $300 million boost from the previous year—at the time, the mayor said that the budget hike was actually the result of the restoration of funds that had been cut since the 2008 recession. According to the Philadelphia Inquirer, the city’s spending has increased by $1 billion since Kenney was elected in 2016. Kenney had originally drafted a $5.2 billion budget for the 2021 fiscal year, but he revised it following closures and revenue shortfalls due to the coronavirus pandemic. The council will vote on the 2021 fiscal budget by July 1.

On Tuesday, May 5, Philadelphia reported that there were no new Covid-19-related deaths, making it the first day since March 24 on which no one died from the virus.