A stark look at life in New York City during the pandemic. Fascinating yet heart breaking: Some people have no shame - as noted by The Observer: 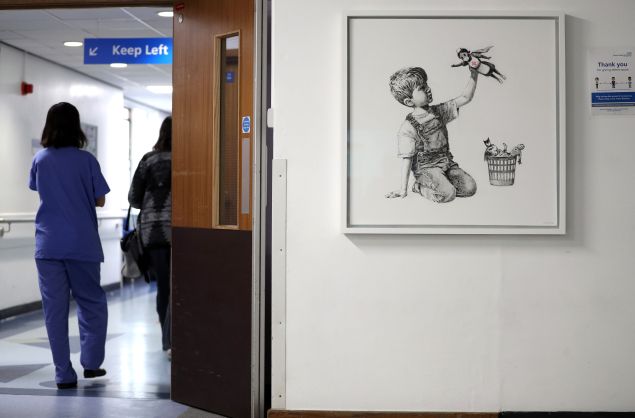 As one of the most famous artists in the world, Banksy is used to people making attempts to pilfer his creations: last September, a stencil drawing made by Banksy of a rat disappeared from its perch outside the Centre Pompidou in Paris, and it still hasn’t been determined whether Banksy himself was involved in this caper. More recently, however, a painting made by Banksy honoring the hospital workers battling at the front lines of the coronavirus was reportedly almost stolen from Southampton General Hospital in the UK. According to The Sun, a mysterious man was spotted loitering around the painting, which is called Game Changer, by guards watching via CCTV. He was subsequently removed from the premises before he could do any damage.

“The man just walked in brandishing a cordless drill,” an unnamed source told The Sun. The attempted robbery apparently took place on May 8, only two days after the painting was originally installed in the hospital. “Security spotted him and asked a supervisor if they should stop him. They were told to watch him and he was seen walking past the picture at least five times, clearly having a good look. Security stepped in and he was removed.” It was originally planned that the painting should remain in the hospital, at which point it’ll be auctioned off in order to raise money for the U.K.’s National Health Service.

Game Changer, which depicts a small child playing with a doll in a nurse’s uniform while neglecting superhero figurines in an adjacent basket, could eventually draw as much as $6 million at auction, which would be a hugely helpful influx of cash for the NHS, especially given the volatility that the pandemic has unleashed. Given the fact that the Banksy painting holds so much potential value for the U.K. hospital system, it seems as though it should be guarded carefully in the future.