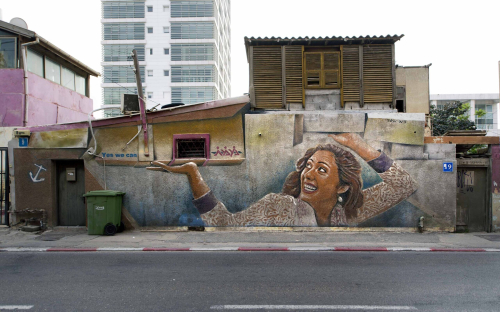 The Times of Israel sheds light on an international travesty. Artist neighborhoods filled with street art are being over run by developers and destroyed. One such neighborhood is the Florentin in Tel Aviv. Read more here --

The hub of Tel Aviv’s street art scene remains Florentin. Operators regularly offer guided street art tours for foreigners and Israelis alike to view the art spread throughout the neighborhood. Abarbanel Street and its surrounding industrial zone of wood and metal workshops — as well as art galleries — are the street art epicenter.

But with Florentin’s ongoing, fast-paced gentrification, the art on its streets is dwindling. In several parts of the neighborhood, in fact, street art was recently painted over by the municipality. Due to soaring real estate prices, rival developers are battling over the land in their haste to build residential housing. And as they do this, they are stripping away the neighborhood’s soul, driving real estate prices even higher, while offering little to the public — apart from more living quarters in an overcrowded section of a city that is in dire need of cultural spaces.

“Street Art Tel Aviv” — the first in our series of books documenting Tel Aviv’s urban art scene — captures the streets of the city when they still largely belonged to us.