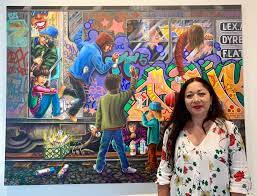 ‘It’s About Time’: Street Art Trailblazer Lady Pink on Why She’s Painting Memorials to the Unsung Legends of Graffiti

The show at the Museum of Graffiti honors the likes of KEL139, Caine One, Crash, and Erni Vales.

As soon as Lady Pink can get a vaccine, she’s headed down to Miami. The legendary street artist’s solo show—only her second in the last decade—opened on Friday at Miami’s Museum of Graffiti, but she could only attend virtually.

One of the biggest names in street art history, Lady Pink began tagging with graffiti artists including Seen TC5 as a high school freshman in 1979, later co-starring in Charlie Ahearn’s hip-hop film Wild Style. Her work quickly crossed over to the gallery world when she was featured in the first major graffiti art show at New York’s Fashion Moda in 1980.

But despite her regular inclusion in blockbuster graffiti group shows such as “Beyond the Streets,” Lady Pink’s only solo museum show to date has been an offsite exhibition, “Respectfully Yours,” at the Queens Museum in 2015.

Enter the Museum of Graffiti, which opened in December 2019 to provide a permanent showcase for an often-ephemeral art form.

A hybrid museum-gallery model, the for-profit institution has a permanent exhibition showcasing the evolution of graffiti art over the last 50 years, but also stages temporary shows where the work is for sale as a way of funding the operation.

Everything is for sale in the show, except for one canvas consigned to Jeffrey Deitch for an exhibition he is curating next year. Ket hopes to attract institutional buyers for her two new bodies of work: large-scale paintings with feminist themes, and a deeply personal portrait series dedicated to her friends in the graffiti community, including Dondi White, Crash, Lee Quiñones, Daze, and Caine One.