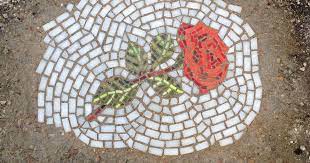 The Washington Post reports on Jim Bachor's effort at filling in potholes with mosaics.

Jim Bachor travels across the country filling potholes for a living. He doesn’t just fill the unsightly road gaps with cement, he actually turns them into art — and often, social commentary. Bachor uses hundreds of pieces of Italian glass and marble that he cuts to create the sometimes subversive mosaics, which he installs on the ground to beautify unsightly city streets. He doesn’t work with cities on the installations, he works rogue, and he places the mosaics himself.

Bachor began his pothole art in Chicago, where he lives, by installing the word “pothole” in black and white marble in a road divot in 2013.“People loved it and thought it was funny,” he said. “Was it legal? I still don’t know. I decided to turn my hobby into a bit of a Robin Hood thing. If I had to ask for permission, I wouldn’t be doing this.” He was recently in D.C. making pothole mosaics of wolves for a conservation group.

Bachor’s work in Chicago includes filling street craters with mosaics of a TV remote control, cats, a Twitter blue check mark and the words “I couldn’t do this if I were Black” — as well as other images to make people stop and look, including the word “LIAR.” He’s worked in many cities, including New York, where he’s made mosaics of dead rats, pigeons and cockroaches. He was called “Pothole Picasso” by the New York Post.

In D.C., Bachor was hired by the #RelistWolves Campaign, a privately-funded group that is working to get Northern Rocky Mountain wolves reclassified as an endangered species in an effort to get them the same protection as other gray wolves.

Now he spends about 10 hours on each piece and said he has created 108 artworks, including commissioned installations for streets in Nashville, Philadelphia, New York City and Los Angeles.