Secret Tiles All Around Tel Aviv 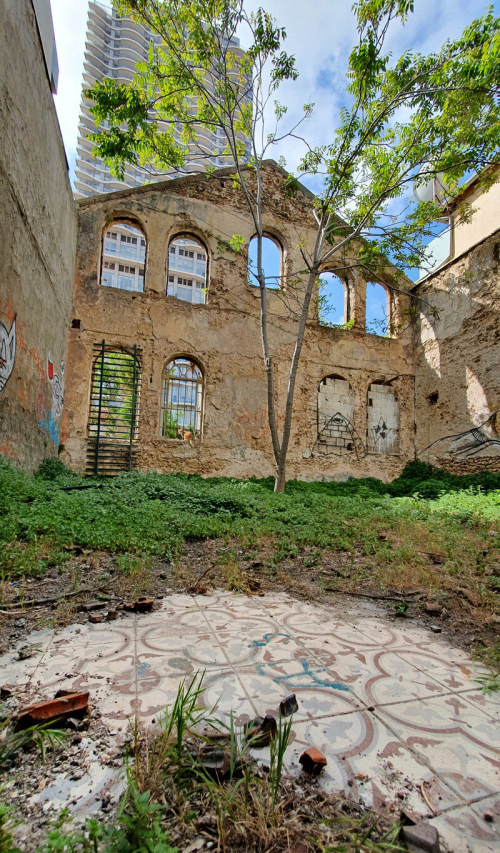 In the early 20th century, Tel Aviv had a distinguished industry of beautiful decorated tiles, which can still be seen in some private homes, apartments, stairwells, and public buildings. After peaking in the 1920s, the tiles have become more and more scarce over the decades. Now, there’s a renewed appreciation for them.

Between 1921 and 1925, Tel Aviv’s population went from 2,000 to 34,000. The new city’s architects were European Jews who trained in art schools in Eastern and Western Europe. Their building style came to be known as Eclectic. Architect Professor Nitza Szmuk, the guru of historical building conservation in Israel, says Eclectic architecture represented “the attempt to create a synthesis between East and West, thereby generating a local notional style.” The architects’ perception of Palestine and the Near East remained Orientalist, even when walking in the Tel Aviv sunshine or buying a tomato at the local grocer. The tiles in their buildings were part of this European Oriental fantasy. In the words of Architect Yossi Klein in a Domus magazine article, “the contrast between ‘the Oriental style’ and the European building technique allowed Zionists to return to a ‘sterile Orient,’ while maintaining European modes of living.”

“This was the golden age of the painted tile,” says Avi Levi, a landscape architect and hunter of derelict buildings and decorated tiles. “They became a local fixture and the connection to the European origins was forgotten.” The decorated tiles prevailed during the early 20th century in houses in Palestine, Lebanon, Syria, and Iraq. They were found in luxurious villas and humble apartments. However, “after three decades, people started to think of the tiles as old-fashioned, expensive and excessive.” Ultimately, “this style flourished only for a short time,” Klein writes, “and as the conflict with the Arab community escalated, Modernist tendencies prevailed.” The romantic, Eclectic style gave way to the clean, modernist Bauhaus. Decorated tiles were abandoned in favor of simple, cheap, industrial tiles. As a result, most of the factories have closed. But at the end of Herzl Street, a street of woodworkers and craftsmen in southern Tel Aviv, the small tile factory of the Gluska family is operating to this day. 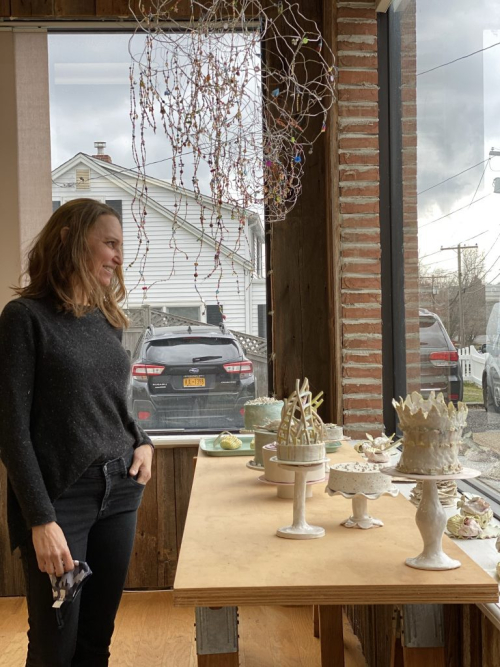 With all of the empty storefronts, local administrators on Long Island have a great idea - require empty storefront owners to use their space to showcase local artists. And it looks to be a win-win. This from Artnet --

Southampton's mayor proposed the initiative, which is now a law, last summer.

It’s not uncommon for storefronts to remain empty during the colder months in Southampton, the quiet eastern Long Island village overrun by beach-bound New Yorkers every summer. But the pandemic has exacerbated the issue, leaving its commercial streets looking like ghost-town versions of their former selves.

Now, the village is turning to local artists to breathe a little life into these tenantless properties.

Last year, Southampton mayor Jesse Warren introduced the Storefront Art Project, an initiative requiring landlords to fill storefront spaces that have been empty for more than a month with creations from community artists, or else be slapped with a $1,000 to $2,500 fine. The idea was signed into village code in July, and its impact is starting to be felt on the streets now.

Artworks can’t be offensive or overtly political, according to the law, and must be approved by the village administrator or come via sponsorship from the Southampton Arts Center or Southampton Artists Association. (The town encourages artists to go through these organizations for support—financial and logistical—in realizing potential projects.)

A grace period for landlords extends through next month, after which fines will be doled out to nonparticipants. But Mayor Warren doesn’t anticipate many of those.

“Our goal is to partner with the landlords, not to fine them. We want to them succeed so we’ve been pretty lenient with the enforcement,” he tells Artnet News over the phone. “We’ve received mostly positive comments. If anything, people are calling us up and saying, ‘Enforce the law more!’”

Among the first fruits of the initiative was a pair of wavelike assemblages made from coat hangers, price tags, and aluminum can tabs by local artist Alice Hope, which went up in the window of what used to be a Chico’s clothing retailer last November. Following that came an installation of photographs by Kerry Sharkey Miller hung in a former J. Crew earlier this month.

“The community has been very enthusiastic about the project,” says Amy Kirwin, artistic director of the Southampton Art Center, which sponsored both artworks. “The installations are providing a safe way for people to enjoy art during these challenging times, and it also benefits local businesses by driving more traffic into the village.”

“Of course the ideal situation would be for all of the shops to be rented, but this is a wonderful alternative in the colder months,” she adds.

Kirwin says three other installations are in the works, one of which—a suite of ceramics resembling baked goods by artist Monica Banks—will be revealed in the coming weeks. Meanwhile, there’s a stack of additional proposals still to sort through as more windows become available.

The artists behind these projects were paid, via honorarium, by the Art Center, but the law doesn’t require landlords to pay installation artists. For most participants, the appeal will come in the form of free exposure—and from that, hopefully, sales.

On this point, Mayor Warren says he encourages landlords to take a note from some of the village’s newest inhabitants—art businesses like Hauser & Wirth, Phillips, and others that have recently opened up Long Island outposts—and market their artists’ work, the way a gallery might. They can even take a cut of potential sales, he says.

As of last week, some 75 storefronts on Southampton’s two biggest commercial stretches, Jobs Lane and Main Street, remained empty, according to the Washington Post.

The Man Who Turned His Home Into a ‘Mosaic Palace’ 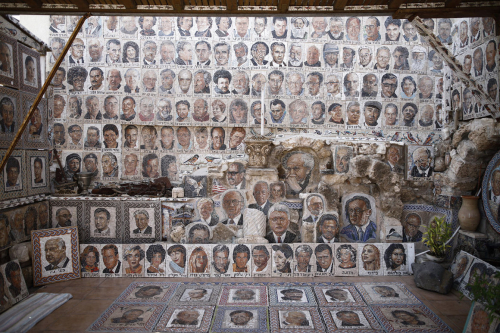 Yossi Lugasi was tired during the final months of his life. He had a hard time getting out of bed, moving or eating. His wife, Yaffa, begged him to finish the portrait of Donald Trump he started working on when he was still feeling better. Lugasi would get up, drag himself to his work table, glue some orange, pink and yellow mosaic pieces to a net, and go back to bed.

Lugasi passed away a year ago. The small mosaic portrait of Trump hangs in a discreet corner of the living room in his apartment, in the Israeli port city of Jaffa. It is hidden among hundreds of such portraits, mostly of Zionist leaders, Jewish historical figures, and Israeli pop culture icons. The portraits cover the walls, doors, door frames and floors of the humble housing project apartment. They spill out onto the roof: artists and actors, prime ministers, presidents and philosophers, Holocaust martyrs, war heroes, members of failed American peace conferences, and the spy Eli Cohen, portrayed by Sacha Baron Cohen in the Netflix series The Spy. The portraits hang on walls on the roof, overlooking the Jaffa projects, blending into a landscape of solar water heaters and clothes lines. Over four decades, Lugasi—who left school during the 5th grade, was barely literate and never studied art formally—created no less than 1,090 mosaics.

Lugasi was born in Morocco in 1949, to a family of eight siblings. In 1954, during the great immigration of Jews from Islamic countries to Israel, his family arrived at a tent camp for recent immigrants in the Beit She’an Valley. His mother Aliyah worked as a seamstress, and his father Eliyahu painted houses. Lugasi’s workroom features a murky oil painting of a hill covered with tents. At the front of the painting a woman sits on a pile of suitcases, watching children playing in the mud.

When he turned 13, as a bar mitzvah present, he went to visit his friends from the absorption camp back in the 1950s. The friends had moved to the poor ‘“development town” of Beit She’an. The camp was razed, and beneath it were found the remains of the grand Roman and Byzantine city Scythopolis and its many mosaics. As an adult, when he couldn’t find a place to store drawings that were vulnerable to the rain and sun, Lugasi chose as his medium the eternal mosaic, which, like in Scythopolis, never peels or fades.

Today, impossible meetings occur on Lugasi’s roof, under the strong Jaffa sun: Ben Gurion is watching Clinton and Elvis is staring at Itzhak Rabin. One could expect Lugasi to reject those people, the representatives of an establishment that marginalized him. Avi says his father did the exact opposite: He built a shrine to them, and so reclaimed power. “His creation,” Avi says, “complements his life story.” 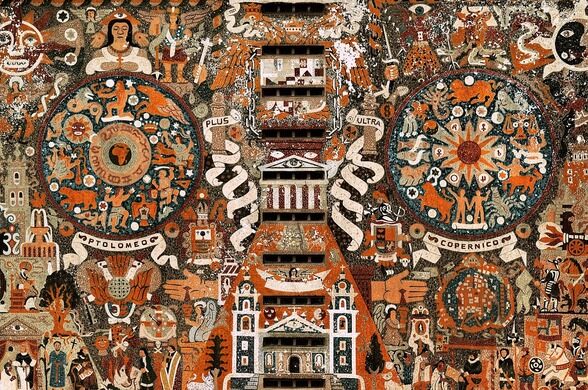 Atlas Obscura has found a great example of mosaics in Mexico City.

Originally opened in 1956, the library building is most evidently the work of artist Juan O’Gorman. Though the building’s architecture is blocky, windowless, and monolithic, the artist created colorful designs that cover the entire surface of all four sides. The designs were inspired by a quartet of historical epochs, with the north wall representing the pre-Hispanic period; the south wall, the colonial period; the east wall, the modern era; and the west wall, the university’s history.

The colorful decorations turn what could have been an imposing institutional block into a vibrant attraction that’s both a piece of history and a piece of art. And again, thanks to a little block jutting up from the roof like a handle, combined with the circular depictions of the Ptolemaic and Copernican visions of the universe, it really looks like a massive boombox built by an ancient civilization.

And the decorations get even more incredible up close, as they aren’t simply painted onto the walls, but composed of designs illustrated with a variety of types of local stone, each chosen for its natural color. Amazingly, all of the reds, greens, blues, yellows, and other colors are created with naturally colored stones from across Mexico. O’Gorman chose this method because as opposed to paint and other mediums, the stones wouldn’t fade.

The UNAM Central Library is an incredible building that manages to encapsulate the country’s rich history with a kind of symbolic visual poetry, writ large. It almost has to be seen to be believed. But seriously, you guys see how it looks like a boombox, right?

I am a great fan of pottery but never thought that animation and pottery could go together! Who knew? So this video of such a collaboration is quite an eye opener. Animator Jim Le Fevre, artists Roops and Al Johnstone of RAMP Ceramics, and documentary filmmaker Mike Paterson created a film featuring a ceramic zoetrope for the Crafts Council.

A zoetrope is a device that creates an illusion of motion with static pictures. The group collaborated to create a clay pot that has prints of static birds and displays an animated show when spun at high speed. The project showed how the art of pottery can be merged with experimental animation. Watch the film about the project below.