5 - This was the fifteenth day in a row with temperatures well above average.  During this string of days the high averaged 50°, which is more typical of mid-March.  However, this period would be followed by an Arctic air mass that would stay entrenched over the Northeast for four weeks.

14 - Typically, based on a 1:10 water-to-snow conversion ratio, today's 0.15" of liquid precipitation should have produced 1.5 inches of snow.  However, because it was such a frigid day (high of 17°/low of 9°) with low humidity this amount of precipitation produced 5.7" of fluffy snow.  The snow began last night and continued until just before daybreak.

16 - This morning's low of 1° above zero tied January 10th's low as coldest temperature of the winter - and the coldest reading in ten years (since a low of minus 2° on the morning of Jan. 19, 1994).  Today was also the sixth day of the past eight with a low in the single digits.  (Through the winter of 2015 this morning's low is the coldest of the 21st century.)

25 - Today was the eighth day out of the past seventeen with a morning low in the single digits.

31 - Although the first five days of the month were 15 degrees milder than average, this ended up being the coldest January since 1977.  Twenty of the past twenty-five days had high temperatures of freezing or colder and were 11 degrees below normal.  And today was no different, with a high/low of 28/15.

2 - Today was the 28th day in a row with colder than average temperatures.  During this four-week period temperatures were 10 degrees below normal.

3 - This was the 29th day in a row in which the low temperature was 32° or colder, the longest such streak since December 1989.  Later in the day a cold rain (the high temperature was 38 degrees) fell during the afternoon, amounting to 0.96".

16 - Today's weather was a drastic change from yesterday's upper 50s as temperatures fell below freezing by late morning and then a late winter storm dumped 3.5" of snow on the City during the afternoon (up to seven inches fell in the suburbs).  The snow was blown around by winds gusting to 40 mph, which created lots of traffic problems.

17 - Today's high of 31° (19 degrees colder than normal) was the the first time since 1967 the high temperature stayed below freezing on St. Patrick's Day.  There was also a light accumulation of snow (0.5"), just the eleventh measurable snowfall on the holiday since 1870.

18 - A mixture of snow, sleet and freezing rain during the morning accumulated just under an inch and was the final ice/snow of the winter.  This was the second winter in a row with more than 40 inches of snow, the first time that's happened since the winters of 1947-48 and 1948-49.

12 - Not a great day for the Mets home opener as rain moved in after 2 PM and continued for the rest of the day (0.55" was measured).  Temperatures were in the low 50s.  However, the Mets won, scoring early and held off the Braves 10-6.

13 - For the third day in a row the high was an unseasonably warm 86°, seventeen degrees above average.

15 - After a sultry high of 87° (sixteen degrees above average) the day ended with heavy rain between 9 PM-midnight that amounted to 1.16".  Although it wasn't a tremendous amount, today's rainfall set a record for the date, breaking 1898's record by 0.02".

17 - After a muggy afternoon in which the high reached 87°, 0.57" of rain poured down during a thunderstorm between 4-5 PM.  More thundershowers popped up later and an additional 0.42" fell.

13 - 2.21" of rain fell in a 24-hour period that began yesterday afternoon and ended today at noon.  Today's high was only 69°, fifteen degrees cooler than average.

28 - Today was only the second day this summer to have a high temperature in the 90s.  It was also the last day (the first was back on June 8).  This was the fewest number of 90-degree days since the summer of 1902, which had just one.  A typical year sees eighteen days in the 90s.

8 - Heavy rain (3.77") from tropical storm Frances flooded the area shortly before morning rush hour (most fell between 4-7:00 AM).  1.76" fell between 5-6:00 AM.  Frances' effects were felt here three days after it made landfall as a slow-moving category 2 hurricane on Florida's East coast.

18 - 2.18" of rain fell during the morning, most of it between 8-10 AM, as the remnants of Hurricane Ivan moved through.  Ivan's rainfall was much heavier in Pennsylvania and upstate New York.  Damage wise, the storm was one of the five costliest hurricanes (until 2010's Hurricane Irene pushed it down to sixth).

28 - Three weeks after the remnants of Frances and ten days after Ivan, the remnants of a third tropical storm, Hurricane Jeanne, moved through.  By the time its rain ended the following morning 4.66" had fallen, the most from a storm system since tropical storm Floyd dumped 5.44" in 1999.  The rain that fell today, 3.84", was a record for the date and brought the month's total to 11.41" making this the rainiest September since 1934.

25 - It was a mild Thanksgiving Day through early afternoon, with temperatures in the 60s during the morning hours, but after the temperature peaked at 65° a cold front moved through and the mercury fell 30 degrees by midnight.

10 - Just two degrees separated today's morning low of 45° and the afternoon high of 47°.  This tiny diurnal variation was largely due to overcast skies and light rain during much of the day (0.41" was measured).

19 - An Arctic front moved through later in the afternoon and the temperature plunged from 47° to 21° by midnight.  The season's first snow fell between 9 PM-3 AM, but it was just 0.6". 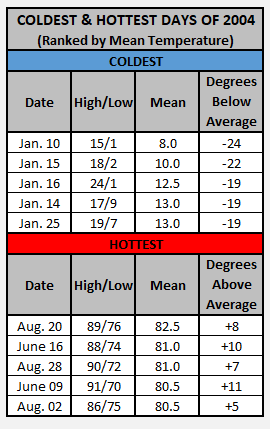 I was on a plane that almost crashed during a very stormy 12/23/2004, the Thursday before Christmas. I remember the captain saying "brace for ditching."