5 - Two inches of snow fell in the wee hours of the morning.  It was the month's only snowfall.

15 - Today was the 24th day in a row with no precipitation.  Total precipitation for Jan/Feb was just 2.76", half of what typically falls in these months.  These twenty-four days were also cold as temperatures averaged three degrees below normal.

19 - This morning's low temperature of 28° made this the 31st day in a row with a low at freezing or colder.  There have been only six other streaks longer than this in the years since 1960 (the most recent was one of 38 days during the winter of 2015).

22 - 1.1" of snow fell before a changeover to rain took place.  This was the month's second, and last day, of precipitation.  The last time there were so few days of precipitation in a month was back in October 1963.

29 - The morning low of 12° was the coldest reading of the entire winter - and it occurred on the last day of "meteorological winter" (Dec. 1-Feb. 29).  And the high recovered to just 21°, twenty-three degrees below average.

1 - This year March came in like a polar bear rather than a lion as the morning low was 10° (twenty-one degrees below average), the coldest reading in the month of March since 1967.  No day in March has had a colder reading since then.  (However, it was still six degrees above the record for the date.)

11 - Beginning last night at around 9 PM, and continuing until a little past 1:00 this morning, an inch of rain fell.  Nearly half of the precipitation, 0.44", fell between midnight-1 AM.  This was the first of six rainstorms in March that dumped 0.75" or more of rain.  All told, the month's total precipitation would amount to 10.42", making it the rainiest March on record (a record eclipsed in 2010 when 10.68" was measured).

13 - One last gasp of winter as sleet and slow lashed the area from 5 PM into the wee hours of the next day, accumulating 4.6" (much of it today).  After a morning low of 23° the day's high of 33° was reached at midnight.

21 - An intense nor'easter battered the area with heavy rain and gale force winds (peak gust was clocked at 46 mph).  The 2.21" of rain that fell was a record for the date; an additional 1.04" fell the next day, ending in the early afternoon.  The 3.25" of rain that fell during this 36-hour assault was the most since January 1979.  The winds were so strong that the 40-story building I worked in at 800 3rd Avenue (between 49th and 50th Streets) was swaying noticeably and the office closed mid-afternoon.

9 - 3.42" of rain fell, with nearly two inches falling in a three-hour span between 5-8 PM.  It was an especially inopportune time for so much rain because it happened during New York's 11-day subway strike (April 1-11), which forced many commuters to walk to and from work.

10 - A day after a record deluge, it was dry and warm with afternoon temperatures in the low 70s, thirteen degrees above average.  The weather was perfect for the the Mets' home opener against the Cubs.

17 - The morning low was 32°, thirteen degrees colder than average, one of the latest dates in New York City for a last frost.  (The typical date is April 1.)

18 - It was a very pleasant day for the Yankees home opener as skies were sunny and the temperature rose into the mid-60s.  Unfortunately, for the second year in a row, the Yankees lost.

5 - After a low of 57°, the high jumped to 90°, a record for the date.  This was the first 90-degree day of the summer; thirty-one more would follow (mostly in July and August).  It came more than three weeks ahead of the average date of New York's first 90-degree reading.

18 - For the fifth year in a row rain fell on this date.  Today's measured 0.15" and fell during the morning between 6 AM and noon.

24-26 - After a hot Friday (high of 90°) each day of Memorial Day weekend gradually cooled down, but skies were sunny throughout and temperatures stayed above average: 86°-84°-76°.

3 - Two thunderstorms produced significant downpours, the first dumped 0.52" of rain from 8-9 AM and then 0.43" fell between 2-3 PM.  It was also a warm day with a high/low of 84°/67°, eight degrees above average.  Total rainfall for the day was 1.08", the first time an inch of rain fell on this date (it's happened three additional times since then).

9 - This morning's low of 47°, a record for the date, was the coolest reading in June in eight years - and there hasn't been a chillier reading since.

28 - Today was the eighteenth day in a row with no rain.  This was just four months after a dry spell of twenty-four days between Jan. 23 and Feb. 15.

26 - It was a hot, late summer day with an afternoon high of 95°, fourteen degrees above average.

27 - Hot, hot, hot with a blistering high of 97°, sixteen degrees above average.

28 - The late summer heat wave persisted as the high reached 95° degrees.  This ensured that this August would go down as New York's hottest on record.

8 - Today was the 18th day in a row with warmer than average temperatures (averaging 7.6 degrees above normal).

17 - Heavy rain between 11 PM-midnight amounted to 0.85", nearly half of the month's total precipitation.

25 - Three days after the mercury soared to a sizzling 94°, today's high temperature was a chilly 62°, 11 degrees cooler than normal.

26 - Conditions for this year's NYC Marathon couldn't have been more different from last year, when temperatures rose into the upper 70s under sunny skies.  This year runners had to contend with temperatures in the 40s throughout the day, gray skies and winds gusting between 25-40 mph.

3 - This was the 15th day in a row with below-normal temperatures.  During these days temperatures were six degrees chillier than average.

17 - This morning's low was a frosty 28°, thirteen degrees colder than average.  It came just three days after a high of 71°, eighteen degrees above the norm.

8 - The day John Lennon was shot outside his apartment building in New York was a very mild one.  With a high/low of 64°/46° it was the mildest day of the month, eighteen degrees above average.

15 - The temperature remained below freezing all day (high/low of 31°/18°) and the first snowfall of the winter arrived after 9 PM, accumulating 1.1" by midnight.

24 - An inch of snow fell during the afternoon as Arctic air swooped in.  The temperature dropped from 37° in the morning to 20° by midnight.

25 - This morning's frigid morning low of minus 1° (thirty degrees below average) was the coldest reading of the year and a record for Christmas Day.  And if that wasn't cold enough gale force winds produced a "feels like" temperature of -25°.  This was quite a contrast from last Christmas which was one of the mildest on record. 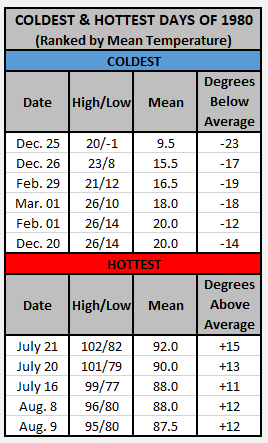 thank you for the 8th December 1980 data