1 - It was a wet first day of the year as an inch of rain fell through mid-afternoon.

13 - A late afternoon/nighttime snowstorm that dumped 5.8" on New York was the same winter system that affected Washington, DC earlier in the afternoon when an Air Florida jet crashed into the Potomac River minutes after takeoff, killing 78.

17 - From a frigid 19° just after midnight, the temperature fell steadily all day long and by midnight the official thermometer in Central Park was at zero degrees.  (Five years earlier on this date the low was a record 2° below zero.)  This outbreak came just five days after another Arctic outbreak that produced lows in the single digits for three days in a row.

27 - Today was the seventh day this month with a morning low in the single digits. It was also the sixteenth day of the past twenty to have a high temperature of 32° or colder.  12 inches of snow fell during this nearly three-week period.

25 - Today's high was 28°, the only day in February with a below-freezing high temperature.  This was in contrast to January which had sixteen days that stayed below freezing for the entire day.

6 - Just 1.1" of snow had fallen in February and March when a blizzard dumped 9.6" of snow on the City today, less than a week before Easter.  More than a foot fell in New Jersey and Westchester County.  The storm started as rain in the pre-dawn hours and changed over to snow mid-morning and lasted through late afternoon.  By midnight the temperature had fallen to a record low 21°.  This was the most snow to fall so late in the season since ten inches fell on April 3, 1915. To watch news coverage from WABC during the blizzard click here .

7 - In the aftermath of yesterday's snowstorm, the morning low was 21°, twenty-one degrees below average and the coldest reading so late in the year since April 1, 1923 (when the temperature dropped to 12°).  Today's afternoon high of 30° was the latest date for a below-freezing high.

18 - This was the eighteenth day in a row in which no high temperature was duplicated.  During these days the highs ranged from 30° to 72°.

13 - It was a damp and very cool day as 1.65" of rain fell and the high was just 55°, twenty-three degrees below average.  Only three degrees separated the high from the morning low.

27 - Today was the last 90-degree day of the year.  It came one month earlier than the usual date for this occurrence and was the sixth earliest occurrence on record (the five earliest occurrences were between 1871-1902; 1982 would fall to seventh after the summer of 1986).  This summer's eleven 90-degree days were concentrated in the past twenty days.  During this nearly three-week period the average high/low was 89°/73°, 4.4 degrees above average.

9 - A cold front moved through during the morning, but before it did the temperature was in the 70s for a few hours after midnight, making this the ninth day in a row with a high in the 70s.  During this string of mild days (five which had highs of 77° or warmer) the average high was 76°, eight above average.

6 - The day's very mild high of 67° occurred shortly after daybreak.  This was thirty-two degrees above the average temperature for that time of day.  And while the temperature fell slowly throughout the day, it was still 56° at midnight.

8 - Over the past nine days the high/low temperatures averaged 60°/50°, sixteen degrees milder than average.

9 - Five days after a record-setting high of 72° the temperature took a nosedive to 19° by midnight tonight.

12 - Three inches of snow fell during the morning, the first snowfall of the winter (and eight days after a record high of 72° degrees).  Less snow would fall in the next eight weeks combined than fell today.

25 - Two years after the coldest Christmas Day on record, today's high of 64° tied 1889 as the mildest Christmas on record.  It was also eight degrees milder than Easter Sunday.

26 - For a second day in a row a record high was set as today's high temperature reached 63°.

29 - Today's high was 65°, the seventh day this month with a high in the 60s.  It was also the eleventh day with a mean temperature 15 degrees or more above average.  Additionally, although just 0.02" of rain fell today, it was the first measurable precipitation on this date in fifteen years. 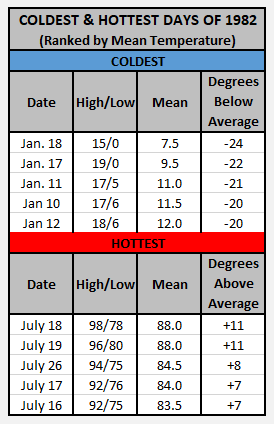