15 - A predicted snowstorm failed to materialize as temperatures stayed above freezing (the day's high/low was 36°/33°).  The combination of drizzle and wet snow (one inch) that fell between mid-morning and mid-afternoon amounted to 0.65" of liquid precipitation in Central Park.  This would have produced about half a foot of snow had the temperature been a few degrees colder.  Although suburbs north and west of the City received significant snowfall, snow lovers in NYC would have to wait another month for a substantial snowfall (the blizzard of Feb. 11-12).  This was the first measurable precipitation to fall on this date since 1962.

6 - Snow began in the afternoon and by the time it ended early the next day 3.9" had fallen (2.5" of it fell today).  This was the largest accumulation so far this winter (but it would be easily topped in a less than a week).

11 - A monster snowstorm moved in Friday afternoon and continued until the wee hours of the morning on Saturday.  The storm really cranked up between 8-11 PM when six inches of snow came down.  When the last flakes had fallen 17.6" had piled up.  It was the biggest snowfall in New York since 1978 (when 17.7" fell on Feb. 5-7) and at the time was the sixth biggest snowstorm in City history (it's now ranked thirteenth).

1 - This was the third month in a row to begin with a high temperature of 47°.

10 - On a rainy day (mid-morning thru mid-afternoon), just two degrees separated the high (42°) and low (40°), something that occurs just once every two or three years.

13 - The sunny finally reappeared after nine straight days of gloomy, drizzly and foggy conditions.  During those days 3.72" of rain fell and there was little variation in temperature as lows were around 40 degrees and highs in the mid-40s.

3 -  Close to two inches of rain fell during the morning, making this the wettest Easter Sunday on record.  This amount was a record for the date, breaking the record set just last year when 1.86" fell.  Besides the rain it was also quite chilly, with a high of only 46°.

19 - 0.8" of snow fell, the latest measurable snowfall since April 14, 1950 when 1.9" fell.  However, despite the snow a cold rain was the primary form of precipitation.  The high/low of 43°/34° made this the chilliest day of the month, fifteen degrees below average.

3 - A week-long warm spell had temperatures that averaged 12 degrees warmer than average.  Interestingly, today's high of 79° would be the mildest reading of the month - not very warm for that distinction.  In fact, the last time the warmest reading in May was this "cool" was more than 30 years ago.  It would happen again in 2003 and 2005.

4 - For the fourth day in a row the high temperature was 75°, which was very close to the average high.

4 - Today's high was 95° after a morning low of 78°.  On this broiling hot afternoon Yankee pitcher Dave Righetti pitched a no-hitter against the archrival Red Sox at Yankee Stadium.

18 - This was the fourth year in a row on this date in which the high was in the nineties.  This year's high was 97°.

21 - Diana Ross' free evening concert in Central Park was interrupted and ultimately postponed when severe thunderstorms lashed the area between 5:30-9 PM (2.26" of rain fell, two-thirds of the month's total precipitation).  It was also a hot day as the high reached 95°, the ninth day of 90-degree weather in the past ten days. (To read more about the concert click here.)

22 - On the day after severe thunderstorms forced Diana Ross' free Central Park concert to be cancelled, conditions couldn't have been nicer for today's rescheduled event.  Skies were sunny, the humidity was much lower and it was 10 degrees cooler than yesterday's mid-90s steam bath.

15 - With a high/low of 84°/63°, today was two degrees cooler than average.  The next day with below average temperatures wouldn't be for another four weeks.  In between these two days, temperatures would average six degrees above average.

31 - After a morning low of 72° (seven degrees above average) the afternoon high rose to only 77° (two degrees below average).

10 - Wow, a high of 97° in the second week of September - twenty degrees above average.  No surprise, it was a record for the date.

11 - Today was the hottest day of the year.  After the day started with an uncomfortable low of 80°, the afternoon high soared to a scorching 99° (the day's low ended up being 78°, occurring shortly before midnight).  This was the hottest temperature recorded in September since 1953 when the mercury reached 102° on 9/2.  The past nine days were well above average as well (+11 degrees) and included five days in the 90s.

12 - Today was the 12th consecutive day in which the high temperature was 84° or warmer.  This stretch of days was nine degrees warmer than average. This was also the 27th day in a row with above average mean temperatures, one of the longest such streaks on record.

19 - Today's high was a sizzling 94°, nineteen degrees above average.

20 - On the day before autumn began the high reached 93°, the last 90-degree day of the year, and 36th overall.  This was the most such days since 1944 and, at the time, the second most on record (now ranked fifth).  Today was also the seventh 90-degree day since 9/5.  And the fourth record high of the month.

1- It was one of those rare days when there was only a two-degree separation between the high and low.  The high of 62° was seven below average, while the low of 60° was five above.  A northeast wind off the Atlantic was responsible for this minimal variation as it brought a layer of clouds, some showers and drizzle.

13 - The morning low was 67°, sixteen degrees above average - and three degrees milder than the average high for the date.  Mostly overcast skies and scattered showers in the afternoon prevented the temperature from rising too much as it topped off at 74°.

13 - The morning low of 32° (ten degrees below average) came four days after a high of 69° (fourteen degrees above average).

16 - Overnight, New York's all-time annual precipitation record was set, exceeding the 67.02" that fell in 1972.  Still, reservoirs were only filled to 42% of capacity since New York's heavy rains had regularly missed these upstate watershed areas.  (However, at the end of the year it was revealed that the rain gauge in Central Park had been malfunctioning for much of the year, thus calling into question the year's total precipitation.)

20 - Today's high was a teeth chattering 25°, seventeen degrees colder than average.  It was the first high of freezing or below of the season.

22 - The first snowfall of the winter fell in the pre-dawn hours, but after 0.6" accumulated it was quickly washed away by heavy rain (about two inches).  The temperature rose steadily from 31° to 53°.

24 - After Arctic air moved in yesterday today's temperature fell all day and by midnight it was a bone-chilling +6°, a record for the date.  Just under an inch of snow fell to deliver somewhat of a white Christmas.  This was quite a contrast to springlike temperatures experienced a year earlier on Christmas Eve.

30 - It was reported today that the year's extraordinary, and record-setting, amount of precipitation (totaling 80.56") was most likely the result of a malfunctioning rain gauge in Central Park beginning back in May. 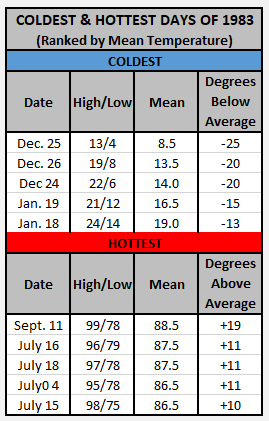 To read about weather highlights from other years between 1970-2019, double click here.

The video for the iconic '80s hit "Cruel Summer" by Bananarama was apparently shot in a "brutal August heatwave" in August 1983. Perhaps brutal by British standards! (interestingly, Britain had just endured its then-hottest July on record in July 1983 and was going through a hot August as well, though not a record breaker.)

What was the highest temperature recorded in N.Y. in August 1983?