10 - A coastal storm pulled Arctic air down from New England, changing rain that began in the early evening to snow after 9:00 PM.  A total of 5.1" fell by 3:00 AM, with 3.4" of it falling tonight.  This was the largest accumulation of the month.

22 - The past twelve days were nine degrees below average, with every day but one having a high temperature of 32° or colder.  Average high/low during these days was 28°/17°.

25 - Today was the last of seventeen days in a row with above-average temperatures.  During this streak temperatures were 12 degrees above normal.

9 - Snow moved in last night and by daybreak 6.9" had accumulated (5.1" of it today), making this the biggest snowfall of the winter.  It was a powdery snow with just 0.38" of water content.

12 - For the fifth day in a row the morning low was in the teens.  The temperature range on these days was between 13° and 18°, quite cold even by January standards.

13 - A winter brought snow in the morning, freezing rain in the afternoon, and plain rain during the evening.  1.4" of snow/iced accumulated, and 2.31" of liquid was measured, most of which fell after 4 PM.  The temperature rose from the mid-20s at at daybreak to the mid-30s by 10 PM.  This was the sixth day in a row with temperatures that were 10 degrees or more colder than average.  The average high/low during these days was 33°/18°, fourteen degrees below average.

28 - A developing nor'easter delivered a mix of snow and rain during the afternoon that continued through tomorrow.  1.5" of snow fell today, but forecasts had predicted substantially more.  However, the temperatures were just a bit too mild to support a snowstorm (high/low was 43°/34°).

29 - 39 consecutive hours of precipitation which began yesterday morning at 9:00 ended at midnight, totaling 2.60" (2.04" of it fell today).  There was only a two-degree difference between today's high/low (36°/34°).  3.3" of snow fell during the storm but it was washed away by regular changeovers to rain.

5 - After 1.61" of rain fell yesterday an additional 2.76" poured down today, for a two-day total of 4.37".  This storm was the biggest rain producer since November 1977.  Rain fell for thirty-one consecutive hours and ended shortly after 4:00 this afternoon.

17 - After three damp and chilly days today was sunny and pleasant with a high of 67°, seven degrees above average.  It was great weather for the home opener for the Mets but, unfortunately, the sunshine didn't inspire the Mets as they were walloped by Montreal 10-0.

26 - A brief but severe thunderstorm struck in the early evening on what was the Saturday of Memorial Day weekend.  Just 0.11" of rain fell but there was extensive tree damage.  Before the storm struck the day was warm and humid and was the warmest day of the month (high of 85°/low of 66°).

28 - For the second year in a row more than an inch of rain fell on Memorial Day (Monday).  Last year it fell in the early morning and evening.  This year it fell during the afternoon.

9 - Today's high of 96° was the hottest reading of the summer, eighteen degrees above average.  It came in the midst of an early summer heat wave which lasted ten days between June 5-14.  The average high/low during these ten days was 91°/73°, twelve degree hotter than average.  Six of the days had highs in the 90s.

13 - I was at the Waverly Theater in Greenwich Village watching Ghostbusters during a fierce thunderstorm that struck between 5-6:00 PM.  For a while the thunder outside coincided with a scene in the movie also with thunder and lightning.  Before the storm struck it had been a stifling hot afternoon, with a high of 94°.

24 - Clouds moved in early in the afternoon but rain held off until much of the Gay Pride Parade was over later in the afternoon.  Then it came down heavily after 9PM and by midnight 1.46" had fallen.

12 - Although today's spritz of rain in the late afternoon amounted to just 0.01", it was enough to make this the seventh year in a row to have measurable rain on this date.

17 - This morning's low of 69° was the first time this month that the low fell below 70°.  During these days the low averaged 73°, five degrees above average.

28 - The month's temperature extremes occurred three days apart as this morning's low of 44° followed a high of 86° on Sept 25.

31 - Temperatures during the past two weeks were 10 degrees above average.  Half of the days had highs in the 70s, including today (average high is around 60°).

5 - The first snowfall of the winter began in the evening, but after 0.7" had accumulated the snow changed over to rain.  (The temperature got no lower than 33° all day.)  This storm brought heavy amounts of snow to New England the next day (and 0.96" of rain to New York).

26 - This was the 18th day in a row with above average temperatures.  During these days temperatures were nearly 10 degrees milder than average.

27 - In the midst of a very mild month today was an anomaly as 4.8" of snow fell during the morning.

29 - Just two days after a five-inch snowfall the afternoon high soared to a record-warm 70° - 31 degrees above average!

30 - Although it was five degrees "cooler" than yesterday's balmy 70° it was still plenty warm enough for another record high. 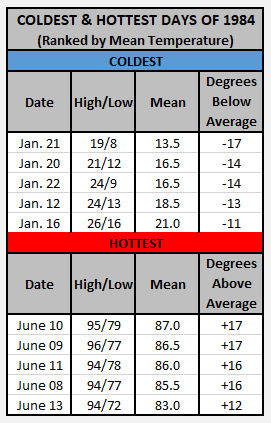