15 - Today's high of 24°/low of 8° made this the coldest day of the winter, sixteen degrees below average.

22 - The average high/low during the past five days was 56°/40°, sixteen degrees above average.

28 - The winter's first one-inch snowfall came in the wee hours of the morning and the daylight hours were clear and cold with a high/low of 23°/14°.  (This was also the day the space shuttle Challenger blew up shortly after lift-off down at Cape Kennedy.)

29 - Today's high/low of 23°/14° was the same as yesterday's, which is the coldest pair of identical highs/lows on record (out of nearly 350 such pairs that have occurred).

11 - The second 4.5" snowfall in the past four days occurred today.  These two small snowstorms accounted for most of the winter's 13 inches of snow.

16 - The 0.3" of snow that fell today was the last snowfall of the winter, a winter in which just 13 inches fell, less than half of the normal amount.

20 - A vigorous cold front moved through and the temperature plummeted from 62° to 21°.

2 - Today was the last of an eight-day stretch in which temperatures averaged 13 degrees above average - including back-to-back afternoon highs of 78° on March 29 and 30.  Average high/low during these days was 72°/51°.

8 - After showers at daybreak the sun came out and for the second year in a row the Yankees played their home opener in temperatures in the mid-70s.  And like last year the Yankees won.

25 - The weather was very pleasant for New Yorkers when they formed their part of the "Hands Across America" chain this afternoon.  Skies were partly cloudy and the high temperature reached 80°.

30 - Today's high/low of 94°/73° made this the hottest day of the month.  The high was twenty degrees above average and wouldn't be topped for more than five weeks.

1 - Today, with a high of 90°, was the 17th consecutive day with above-average temperatures.  During this two-and-a-half week period temperatures were 7.5 degrees warmer than normal (high of 81°/low of 63°).

4 - Although hot weather and July 4th seem synonymous, this year's began at a chilly 55°, twelve degrees below average and the coolest 4th of July temperature on record.

28 - This was the first of four mornings with unseasonably chilly morning lows in the low-50s.  Temperatures during these mornings were: 52° (today), 50°, 51° and 54°.  These readings were well below the average low of 66° and more typical of mid-October.

29 - This morning's low was a chilly 50°, tying a number of previous years for the coolest reading ever reported during this month.  The last time it was this cool in August was in 1976.

30 - Today was the start of Labor Day weekend and the morning low of 51° was the chilliest reading of any day during Labor Day weekends between 1970-2020.  The entire holiday weekend was cool, with temperatures averaging eight degrees below normal.

30 - After August ended with autumn-like temperatures, today's summer-like high of 89° was 20 degrees above average and a record for the date.

26 - A steady light rain during the daylight hours (amounting to 0.64") forced postponement of Sunday's Game 7 of the World Series at Shea Stadium.  This followed the incredible comeback by the Mets last night in Game 6 when a ground ball went through the legs of Red Sox 1st baseman Bill Buckner in extra innings giving the Mets the improbable win.

28 - It was a gloriously sunny and and mild day (high of 68°), perfect for the ticker tape parade in lower Manhattan celebrating the Mets World Series championship the night before over the Red Sox.  The sunny skies were particularly welcome after three damp and gloomy days.

19 - The 0.41" of rain that fell between midnight and 4:00 AM was the first measurable precipitation on this date since 1973.  Temperatures slowly fell throughout the day, from 40° at midnight to 27° twenty-four hours later, resulting in a mean temperature twelve degrees below average.

20 - In a reverse of yesterday, temperatures rose throughout the day, from 26° at midnight to 57° twenty-four hours later.  Rain moved in after dark, with half of the night's 0.94" of rain falling between 11:00 PM and midnight.

9 - The first snowfall of the season, amounting to 0.6", fell in the wee hours of the morning, but the snow changed over to rain as the temperature rose throughout the day, from 32° to 51° at midnight.  In total 0.87" of precipitation was measured.  This was the only snowfall of the month. 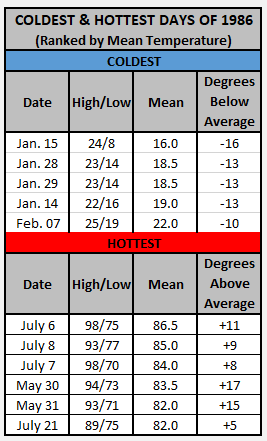