1 - A half-inch of snow fell, the most to fall on New Year's Day since 1978 (when one inch fell).  However, the snow was short lived, changing to rain as the temperature rose to 38°.

3 - This was the last of a 20-day stretch in which temperatures were never below average.  However, there were no temperature extremes as only one day had a high above 50°.

22 - A daytime snowstorm dumped 8.1" of snow on the City while much of Long Island picked up a foot or more.  (Virginia, DC, Maryland, Delaware and South Jersey bore the brunt of the storm with much higher accumulations.)  The City's accumulation was held down when sleet mixed in.  This was New York's biggest snowfall in four years and would be the biggest until the March 1993 Superstorm.

15 - Today was the coldest day of the winter, with a high/low of 22°/4°, twenty degrees colder than average.

23 - 4.2" of heavy, wet snow fell between 2-11 AM, accounting for half of the month's precipitation.  The temperature rose into the low 40s in the afternoon.

1 - March came in like a lion wearing galoshes as an all-day rain dumped 2.36" before ending shortly before 9PM.  The rain came down heaviest between 6-9 AM when 0.99" poured down.  This was more than twice the amount of rain that fell in the entire month of February (1.01").

8 - Today's high was 76°, twenty-nine degrees above average and a record for the date.

10 - Befitting March's reputation for changeable weather, this morning's low of 15° degrees came less than two days after a high of 76°.  These were also the month's extremes in temperature.

12 - Four days after the temperature soared to 76°, the final snow of the winter fell, accumulating 1.9" between this afternoon into early morning on 3/13.  Additionally, there was only a two-degree difference between today's high (33°) and low (31°).

31 - March ended as it began, with a big rainmaker.  Beginning last night, rain continued thru early afternoon today, amounting to 2.00".  In the days between these two storms just 0.57" of rain fell.

4 - 1.99" of rain, a record amount for the date, fell throughout the day and ended late in the afternoon.  Including rain that began late last night the storm total was 2.48".  It was the biggest rainstorm since the beginning of last December when 2.74" fell.

13 - Today was the home opener for the Yankees and after early showers between 5-8 AM the rest of the day was gray and chilly with a game time temperature in the low 50s.  This came after three days of 70-degree temperatures.  Happily, the Yankee bats were hot as they rolled over the Indians 11-3.

10 - Today, with a high of 90°, was the first 90-degree reading of the year, three weeks ahead of the typical occurrence.

25 - It was a very cool Memorial Day as the high of 63° was eleven degrees below average.  Weatherwise, the holiday came one week too early as the following weekend had temperatures in the 90s.

31 - Just like last year (and yesterday, and the day before that), it was a scorching hot day, with a high/low of 94°/76°.  (But unlike last year, there was no thunderstorm.)  This was just the fifth time a weekend in May had readings in the 90s on both Saturday and Sunday.  It was also the hottest of the five, and the last time there's been such a weekend in May (through 2022).

20 - The high temperature today reached 96°.  This was the sixth day of the past seven to have a high of 88° or warmer, nine degrees above average.

21 - Today was Father's Day and an early morning thunderstorm dumped 1.03" of rain between 3:00 and 4:00 AM.  Within that hour 0.60" fell in a 15-minute period between 3:18-3:33 AM.  The daylight hours remained mostly overcast, keeping the temperature considerably cooler than yesterday's torrid conditions.

6 - Today was the 15th day in a row with below-average temperatures.  For the period temperatures were five degrees below normal.

12 - 0.53" of rain fell in an hour (8:08-9:08 PM).  This downpour occurred shortly after the rain started to fall and continued through the next day.  When it was over 1.89" had fallen.  Unfortunately, the rain coincided with the wedding of friends who were married in Westchester Country (on Sept. 13).  Although their guests were protected by a tent, rain trickled in at the edges.  The rainfall on the 13th was the first on this date since 1974.

15 - Today was the 15th day in a row in which the daily mean temperature never rose above average.  During these days temperatures were seven degrees colder than average.

27 - 1.82" of rain fell tonight between 7 PM and 2 AM.  As the rain wound down, one last heavy band delivered 0.63" between 11 PM-midnight (it actually took place between midnight-1 AM but the National Weather Service doesn't recognize Daylight Saving Time in its record keeping).  It was a record rainfall for the date, later broken in 2003 when 1.88" fell.

4 - Today's high of 77°, 20 degrees above average, was the warmest day in November and milder than any day in October.

21 - This morning's low of 18° (twenty degrees below average) would be quite cold even in mid-winter.  It followed by just three days a 70-degree reading and was the coldest reading in November since 1976.

26 - Today was the end of a mild stretch of eighteen days in which temperatures were eight degrees above average.

29 - 2.6" of snow fell, the month's only snowfall.  And the afternoon high of 31° made this the first day of the winter with a maximum temperature of 32° or colder.

30 - Yesterday's snowfall was followed by an Arctic blast and today's high of 21°/low of 8° made this by far the coldest day of December.  These readings were 20 degrees below average. 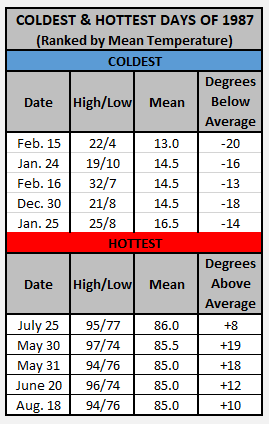