6 - The five inches of snow that began falling after 9:00 AM was the biggest snowfall of a winter with only 8.1" of snow in total.  It was also a record accumulation for the date.

1 - Today's high of 67° was the warmest reading of the month and a record for the date, breaking the record set just last year (and the month's coldest reading would be near the end of the month).  The mean temperature was 24 degrees above average, comparable to last year's mean on this date.

2 - Between Jan. 6 and today temperatures were 9.5 degrees above average.  No snow fell during this four-week period.

6 - An Arctic front passed through in the wee hours of the morning and 2.5" of snow fell during AM rush hour - just the second significant snowfall of the winter.  South Jersey and the Philadelphia metro area bore the brunt of the storm.  This would be the last snowfall of the winter.  Just 8.1" fell for the entire winter, about twenty inches below average, the least since 1972-73 when 2.8" was measured (the least ever).  Since then four winters have had lesser amounts than the winter of 1989 (1998, 2002, 2012 and 2020).

17 - Today's high of 70° this the mildest St. Paddy's Day since 1945 when the temp reached 75° (warmest on record).  This was also the seventh year in a row in which no precipitation fell - a record streak.

18 - The temperature nosedived 40 degrees, from 77° to 37°.  The cold front that ushered in the sharply colder air produced a severe thunderstorm mid-afternoon in which 0.35" of rain poured down in just ten minutes (between 3:14-3:24 PM).  There was also some hail, a rarity in NYC (especially in March).

24 - Beginning at daybreak and continuing until midnight, 2.05" of rain fell, a record for the date.  It was a cold rain as the high reached only 40°, thirteen degrees below average.

1 - The rainstorm that moved in this evening was the first of five to produce an inch or more of rain between now and May 24.  Today's rain, which continued through 9:00 AM tomorrow, amounted to 1.58".

17 - 3.35" fell during a rainstorm that began the previous day.  Rain fell for twenty-nine consecutive hours and ended shortly before 9:00 this morning.  Today's rain total of 1.05" was a record for the date, a relatively low amount for such a designation.  This is also the only time an inch of rain fell on this date since record-keeping began in 1872.

22 - This was the 21st consecutive day in which no high temperature was duplicated.  During this three-week period highs ranged between 53° and 86°, with six days well above average and five days well below average.

24 - 0.70" of rain fell this morning, bringing the month's total rainfall to more than ten inches.  This amount pushed it past May 1984 to make it the rainiest May on record (a record that still stands).  An additional 0.21" of rain would fall before the end of the month.

4 - This was the beginning of a two-week stretch in which rain fell on twelve of the days.  Last year a similar rainy spell occurred in the second half of July.  This year 7.28" of rain was measured while 7.44" fell during last year's soggy fortnight.  Today's rainfall was a minimal 0.09" which fell shortly before daybreak.

15 - Overcast skies, AM drizzle and winds coming off the ocean resulted in only a three-degree difference between today's high (61°) and low (58°).  The low was five degrees below average but the high was 18 degrees below the norm.

28 - This was the last day of rain this month, bringing May and June's combined rainfall to nineteen inches (normal is eight inches.)  Rain fell in more than half of the days between May 1-June 28.  (Twenty-two years later, in August 2011, the same amount of rain would fall in just one month.)

22 - This was the last day of an 11-day stretch with below average temperatures.  During these it was six degrees cooler than normal and four days had afternoon highs that were only in the low 70s.

10 - Today's high was a sizzling 94°, sixteen degrees above average.

22 - Powerful category 4 Hurricane Hugo made landfall near Charleston, South Carolina overnight.  The NYC metro area was prepared for five to ten inches of rain when the storm's remnants moved up the coast, but the storm moved inland instead and stayed well to the west.  This was a big relief since six inches of rain had already fallen between Sept. 14-20.

2 - 1.10" of rain fell during the morning, making this the eighth time in the past ten years that rain fell on this date.

18 - It was a raw and overcast day with afternoon temperatures in the upper 40s just 24 hours after the high reached a mild 70°.

20 - 2.78" of wind-swept rain fell today, and 5.34" over the past four days.  With today's rainfall (a record for the date) Central Park's total precipitation for the year topped sixty inches, making 1989 one of the five wettest years on record - with more than two months remaining in the year.  Winds today gusted to 40 mph.

28 - Today's high of 77° tied with two days ago as the warmest temperature of the month.

30 - For the sixth day in a row we enjoyed high temperatures in the 70s.  This stretch of days, which included four with highs of 76° or higher, averaged 15 degrees above average.

15 - Today's morning low was a balmy 61°, twenty degrees above average (and eight degrees warmer than the day's average high).  Under overcast skies the afternoon high rose to 69°.

22 - In the midst of a brutally cold December (second coldest on record) today's high/low of 18°/8° was not only the coldest day of the month - but of the entire year.

23 - The morning low of 6° was the coldest reading of the month and the year, twenty-three degrees below average.  With today's frigid temperatures 1989 became the year with the most days with mean temperatures 10 degrees above or below average (in the years since 1960; later broken in 2015).

30 - This was the 32nd day in a row with below normal temperatures, a period in which readings were close to 11 degrees colder than normal.  However, despite these ice-box conditions just 1.4" of snow fell. 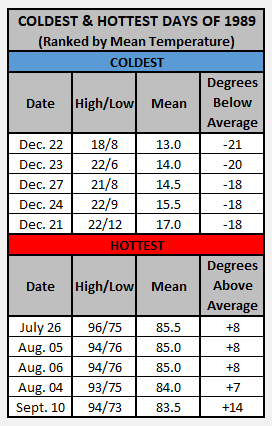 I’ve been watching the brilliant videos from the brilliant late Nelson Sullivan - also known as “5ninthavenueproject” on YouTube - his unparalleled documentation of NYC/gay life between 1982-1989 is something I often come back to, very ahead of its time in terms of the vlog style format which wouldn’t be popularised for another 30 years.

Anyway, the question I have is what was the weather like on the 3rd of July, 1989? That was the day of the last tape. From film it looked like a very hazy and smoggy day.