4 - This was the 21st day in a row with above-average temperatures.  During this three-week period temperatures were 11.5 degrees above normal (high/low of 49°/36°).  It was also damp as well with 4.58" of rain measured.

25 - 1.8" of snow fell in the very early hours of the morning and then bitter cold air moved in.  At midnight the temperature was down to 10° (this followed a low of 30° yesterday and 50° two days earlier).  This was the first measurable snow in five weeks and the only snowfall in February.  It was also the biggest accumulation of the winter (until March 6 when 3.1" fell).

7 - For the second year in a row on this date the morning low was a frigid 13°.  However, this year's high of 35° was ten degrees warmer (but still 12 degrees below average).

13 - Winds shifted to the southwest, lifting the temperature from 43° to 85°, which was 36 degrees above average.  This was the earliest date for an 80-degree reading (breaking the previous record from 1945 by a week).

14 - One day after Central Park recorded its earliest 80-degree reading on record, the warm front that delivered this extraordinary warmth retreated south of the area.  Winds shifted to the northeast and by afternoon, under a bank of clouds and fog, temperatures tumbled into the mid-40s, forty degrees colder than yesterday.

15 - Similar to two days ago a shift in wind direction produced a big swing in temperature.  After shifting from the chilly northeast to the balmy southwest, the temperature soared from 42° to 77°.  This was a record for the date, breaking the previous record set just last year.

16 - Today's high of 82°, thirty-two degrees warmer than average, was the third record high in the past four days.

17 - Since records began the high has reached 70+ just three times on St. Patrick's Day - and two of those times occurred this year and last.  Today's high was 72° - ten degrees cooler than yesterday!  Rain moved in mid-afternoon and amounted to 0.67".

18 - This was the last day of an extraordinarily mild eight days in which the mean temperature was 18.5 degrees above average (high/low of 71°/47°).

24 - Today's high of 39° was thirty degrees colder than yesterday's.  This was also the fourth high in the 30s this month - one more than in January.

7 - The last snowfall of the winter fell at around daybreak, a surprise 0.6".  It didn't last long, however, as the temperature rebounded into the low 50s under sunny skies.  A total of 13.4" of snow fell during the winter, the third winter in a row with well below average snowfall.

20 - Although showers that fell between 11 PM and midnight amounted to just 0.02", this was the first measurable precipitation to fall on this date since 1978.

1 - Today's high temperature of 83° turned out to be the warmest temperature of the entire month.  (And the chilliest day would fall near the end of the month, on May 22, when the morning low would fall to a record 44°).

10 - A year after more than two inches of rain fell on this date, 1.67" of rain fell today, most of it coming during thunderstorms between 3-11 PM.

29 - Beginning at 9:00 AM and continuing for the rest of the day 2.40" of rain fell.  This was a little less than two weeks after 2.32" fell and brought the month's rainfall up to nine inches.  Today's heavy rain kept the temperature well below average as the high was only 60°, fourteen degrees cooler than normal.

6 -  Beginning today and continuing through Aug. 11 nearly ten inches of rain would fall.  2.30" of rain fell today, much of it before 7 AM.

27 - Today was the year's last 90-degree day, on par with the average date for this occurrence.  In total, the year had a dozen days in the 90s - well below the average of eighteen days.

10 - Today was the fifth day in row with a high temperature in the 80s.  (And there would be one more on the 14th.)  This string of unseasonably warm weather was part of ten straight days between Oct. 6-15 that all had temperatures 10 degrees or more above average.

13 - Nearly three inches of rain fell over the past six days.  These days were also unseasonably mild, 14 degrees warmer than normal.  Today's low was a summer-like 69°, eighteen warmer than average.

14 - Today was the seventh day in a row in which the morning low was 66° or warmer, 15 degrees above mid-October's norm.

15 - Today was the tenth day in a row in which the daily mean temperature was 10+ degrees warmer than average - the longest such stretch in the 1970-2016 period.  During these days temperatures were 13 degrees above average.  This was also the thirteenth day in a row with highs in the 70s.

18 - For the third day in a row the low temperature was 52°, a few degrees milder than average.  High temperatures were also very similar, but not the same (69°,72°, 73°).  Today was also different from the other two days in that there was rain, with 0.85" falling during the evening.

4 - The New York City Marathon was run in very mild conditions, with a high of 73°/58° - fifteen degrees above average.  Skies were a mix of sun and clouds.  This followed a day that was even warmer (78°).

29 - A cold front produced showers mostly between 1-2 AM, amounting to 0.11".  This rain brought November's total precipitation to 2.82", the tenth time a month has had this exact amount - the most times a monthly amount has been repeated (through June 2022).

22 - After a very mild low of 58° (twenty-eight degrees above average!), the afternoon high inched up by only three degrees.

24 - High temperatures over the past four days averaged 62°, twenty-one degrees above average.  Today's high was 63°.

28 - Today's 7.2" snowfall (which began late last night), was the first snowfall of the winter, the largest accumulation in nearly four years (since January 1987) and the biggest December snowfall since 1960.  Snow ended shortly before 11AM. 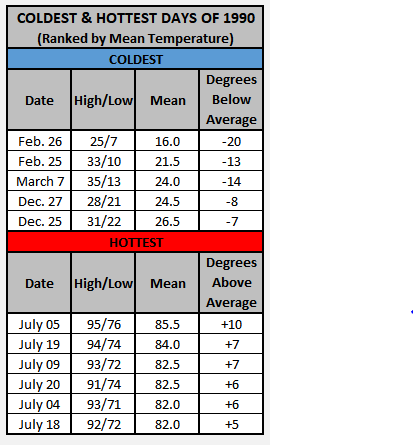 To read highlights from other years between 1970 and 201p double click here.