11 - 5.7" of snow fell during the afternoon/evening before changing to rain overnight as temps rose into the mid-30s (close to one inch of rain fell).  Despite the changeover it was a record amount of snow for the date.

10 - In the past nine days temperatures averaged 17 degrees above normal (high/low of 56°/41°), more typical of the first week in April.

22 - Today's high of 66° broke the record high set last year (63°).  Then a cold front moved through during the evening and the temperature fell to 38° just before midnight.  The cold was ushered in by winds that gusted near 40 mph.

26 - A surprise snowstorm dumped 8.9" of wet snow, the biggest accumulation in eight years (since 17.6" buried the City in on Feb. 11-12, 1983 ).  Because the temperature was just above freezing for much of the day the snow didn't accumulate much on the streets or sidewalks.  This was the winter's third snowfall of five inches or more.

3 - 2.17" of rain fell today (2.54" when the rain that continued until the wee hours of the next day is included), with nearly an inch of it falling between 9-10 PM.  The day's rainfall was more than what fell in the entire month of February and was the biggest rainstorm since Aug. 10 of last year.

8 - Today's afternoon high was a sizzling 90°, a record for the date and the first of thirty-nine 90-degree days this year (a record number of days that would be equaled two summers later).  It was also New York's earliest date for a 90-degree reading until 2010 (when the mercury hit 92° on April 7).  Today was also the home opener for the Mets, played this afternoon (the temperature at Shea Stadium may have been a bit cooler because of its proximity to the ocean).

13 - Today was the 16th day in a row in which no high temperature was duplicated.  During these days highs ranged from 47° to 90°.

15 - In contrast to the summer-like conditions the Mets experienced during their home opener a week earlier, the Yankees' home opener was played in a steady, light rain with temperatures hovering around 50°, well below average.

21 - A steady, cold rain, sometimes on the heavy side, fell throughout the day and amounted to 2.28" - a record for the date.  The high was only 46°, fourteen degrees below average.

6 - A soaking rain, mostly between 5AM-noon, amounted to 1.39".  This was the seventh year in a row in which rain fell on this date.

17 - Today's high was 83°, the seventh day in a row with a high temperature of 80° or warmer.  The average high during this week was 84°, thirteen degrees above average.

31 - This was the warmest May on record, 6.7 degrees above average.  From May 11 onward temperatures were nine degrees warmer than average.  These three weeks had temperatures more comparable to the second half of June.  Ten days had highs of 85° or warmer (and three others had highs of 84°).  And today was no exception as the high/low of 91°/71° was fourteen degrees hotter than the norm.  This was the fourth time in the past six years that the high on this date was in the 90s.

16 - It was a miserably hot and humid Father's Day under hazy sunshine.  The day's high/low of 94°/76° was fifteen degrees above average.

20 - The day after an unseasonably cool high of 66° the temperature today soared to 92°.

23 - Today was the sixth day in the past seven in which the high temperature was 96° or hotter (the exception was yesterday's 89°).  After a high of 99° a thunderstorm between 4-6 PM dropped a half inch of rain.

19 - Hurricane Bob struck the eastern end of Long Island and then southeastern New England and Cape Cod.  The impact on New York City was heavy rain, mostly between 2 AM-noon, that amounted to 2.53".

20 - The day after Hurricane Bob brushed the City an additional 1.19" of rain fell today between 2 PM and midnight, but it was unrelated to the hurricane.

17 - Today's high of 93°, seventeen degrees above average, was the record setting 39th 90-degree day of the year - tied two years later (18 days is the average).  It was also a record for the date.

27 - Although skies were mostly cloudy the afternoon high reached 75°, fifteen degrees above average.  This was also the sixth day in a row with a high in the 70s.

31 -  An intense nor'easter (made famous by Sebastian Junger's book The Perfect Storm) brought gusty 30-40 mph winds but stayed far enough off the coast that New York received just a a trace of rain.

9 - Today was the 23rd day in a row with no rain, the longest dry spell since the winter of 1979-80 when one of twenty-four days occurred.

13 - This was the tenth day in a row with a morning low in the 30s.  However, none of the readings were at freezing or below.  The average during these days was 37°, six colder than average.

21 - This morning's low was a very mild 62°, twenty-four degrees above average and a record for the date.  It was the mildest low temperature in nearly seven weeks.

23 - Today was the fifth day in a row with temperatures 10 degrees or more above average.  During these days the average high/low of 67°/54° was 16 degrees above average.

5 - The first snow of the season fell between 10 PM and 3 AM but amounted to just 0.7" (most of it fell before midnight).  This would be the only measurable snow of the month and the amount wouldn't be topped for more than seven weeks (when 1.3" fell on Jan. 26).  Today was also quite cold with a high/low of 33°/24°, ten degrees below average.  This came just six days after the mercury hit 70°.

19 - With a high/low of 27°/13°, today was the first day of the winter completely below freezing.  There would be just eight more of these days for the rest of the winter (the average is 17). 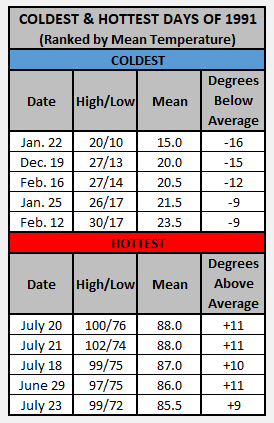