7 - This was the sixth day in a row in which temperatures were 10 degrees or more above average.

15 - The morning low of 21° was 41 degrees colder than yesterday's afternoon high.

26 - The winter's first snowfall of an inch or more fell in the wee hours of the morning, accumulating 1.3".  This was the fifth latest date for the first such snowfall.  The daylight hours were mostly sunny but cold, with a high/low of 31°/20°.

29 - After the temperature rose to 50° by midnight the day before (Feb. 28) it plummeted into the 20s this morning and was down to 19° by midnight.  Gusty winds produced below zero wind chills.  This was the first colder-than-average day since Feb. 13.

22 - Just three days after 6.2" of snow fell another quick moving system dropped 3.2" during the evening.  These two snow events were responsible for most of the winter's 13 inches of snow.  During this evening's snowfall a USAir jet bound for Cleveland slid off the runway at LaGuardia Airport and landed in the waters of Long Island Sound; 26 passengers died.

25 - Today was the 15th consecutive day with a low of 32° or colder, the longest such streak during March in the past 50 years.

10 - Today was the Mets home opener and with a game-time temperature of 71° this was twenty degrees cooler than last season's scorching home opener.  However, today's temperature was still twelve degrees above average -and the first 70-degree day of the year.

22 - Today's high of 93° was the first 90-degree reading of the year, twenty degrees hotter than normal.  However, it was bearable because the air was dry (and the morning low was a comfortable 60°).  Just eight more 90-degree days would follow through late August, half the usual number of hot days.

23-25 - It was a real Jekyl & Hyde Memorial Day weekend.  Saturday had mid-summer conditions with a high of 92°.  Then a big change came on Sunday as a strong cold front pushed through in early afternoon and temperatures plummeted from the low 80s to 45° by midnight.  Monday felt more like October with overcast skies and a high of just 61°.  In the course of the weekend highs went from 19 above average to 13 below average.

31 - 1.99" of rain fell between 2 AM-6 PM, the biggest rainstorm since August of last year.  It accounted for half of May's total precipitation.  The rainy conditions and cloud cover resulted in just a two degree difference in the day's high (61°) and low (59°).  Although the low was average for the date, the high was fourteen degrees below average.  This was the third day this year to have a two-degree diurnal temperature variation, the most of any year in the 1970-2019 period.

15 - 0.37" of rain fell in ten minutes during an evening thunderstorm (6:37-6:47 PM).  The storm was triggered by a cold front that brought relief after three 90-degree days; today's high was 92°.  The downpour (which dumped 0.89" over three hours) disrupted the opening of the third evening session of the Democratic Convention held at Madison Square Garden.

30 - For the second year in a row the chilliest reading of the month occurred today, and in both years that temperature was 44° (12 below average).  However, this year's high, 58°, was five degrees cooler.

12 - This was fifteenth day in a row in which no low temperature was duplicated.  During these days the lows ranged from 39° (16 degrees below average) to 60° (eight above).

16 - It appeared this was going to be the fifteenth year in a row with no measurable precipitation on this date, but then a shower produced 0.01" of rain between 11 PM and midnight.  The day itself, with a high of 77°/61°, was the mildest of the month.  The previous time rain fell on this date, in 1978, the amount was also 0.01".  (In reality, the 0.01" fell before midnight in Standard Time, which is what the National Weather Service uses year-round; however, based on Daylight Saving Time, which was in effect on this date, this rain fell after midnight on 10/17 DST).

30 - Two weeks after a 14-year streak was broken, the 0.01" of rain that fell today between 11 PM and midnight was the first measurable rain to fall on this date since 1976.  (It should be noted that the National Weather Service uses Standard Local Time year-round for its records, but this rainfall actually fell between midnight and 1 AM  on 10/31 based on Daylight Saving Time, which was still in effect on this date.)

2 - With a high/low of 51°/40°, seven degrees below average, today was the chilliest running of the NYC Marathon in ten years.  It was also breezy with winds coming off the ocean.

3 - This was by far the rainiest presidential Election Day as 2.18" of rain fell during the morning. (The previous Election Day record was in 1920 when 0.77" fell).  Including rain that fell yesterday, total rainfall from the storm system was 2.55".  This was more than double September's rainfall of 1.16" and the biggest rainstorm since June 5 when 2.80" fell.

11 - A vicious nor'easter pounded NYC this Friday morning with 50-75 mph winds (Central Park had a 64 mph gust) and heavy rain (2.41", a record for the date).  The high winds created a storm surge that flooded New Jersey's PATH stations and pushed the East River up over parts of the FDR Drive during morning rush hour.  The winds also caused elevators to malfunction in some office towers and high-rise apartment buildings.

12 - Today was unsettled, but it was nothing like yesterday's nasty conditions.  Periods of wet snow fell thru mid-afternoon and a slushy 0.4" accumulated, the first snowfall of the winter and the only snow of the month.  Meanwhile much of Massachusetts was buried by 20-30" of snow.

27 - With a high/low of 31°/18° today was the first day of the winter completely below freezing.  There would be only seven other such days this winter (average number of days is 17). 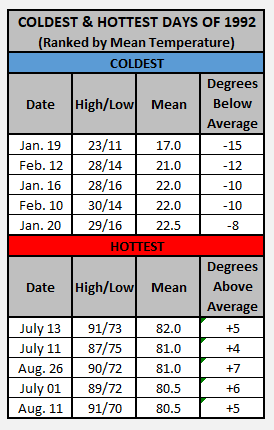