10 - It was overcast, breezy and cold, with the winter's first snowfall of an inch or more falling after dark; by midnight 1.1" had accumulated.  With a high of 27°, today was the only day this month to have a high of 32° or colder.

2 - This morning's low of +7° was the coldest reading of the winter.

21 - 4.3" of wet snow fell on this Sunday evening, mixing with some freezing rain and then rain near the end as the temperature hovered around the freezing mark.  This was the largest accumulation of the winter so far.

26 - It was cold (mid-20s) and overcast with a touch of snow (0.1" accumulated) when a van with explosives in it was detonated during lunchtime in a parking garage under the North Tower (killing five and injuring more than 1,000).

13 - The great March Superstorm (also referred to as "Storm of the Century") paralyzed the Eastern third of the nation and dumped 10.4" of snow on NYC.  The heavy snow changed to sleet and rain later in the afternoon, reducing the predicted snow total by about six inches.  The sound of the sleet lashing against my windows, propelled by 40-60 mph wind gusts, was deafening.  All told, 2.37" of precipitation fell.

15 - Arctic cold moved in after the departure of the March Superstorm and this morning's low of 14° was twenty-one degrees below average.

17 - The 0.75" of precipitation that fell was the most on this date since 1972, when 1.20" was measured.  Rain changed to snow and 0.8" accumulated, the most snow to fall on St. Patrick's Day since three inches fell in 1967 (the most for the date).  This wintry mix came less than a week after the "Storm of the Century" dumped 10 inches of snow on the City.  This would also be the last snowfall of the winter.

24 - This was the 15th consecutive day with below-average temperatures.  The average high/low during these days was 41°/26°, nine degrees colder than normal.  It was also a very wet period, with precipitation on seven days amounting to 4.66".

5 - For the third day in a row the high temperature was 69°, close to the seasonal average.

9 - Bright sunshine and low humidity propelled the temperature from 55° to 89° degrees on Mother's Day.

11 - After a morning low of 57° the mercury climbed rapidly and topped out at 92°, a record for the date.  This was the first of thirty-nine 90-degree days this year.

1 - This was the twenty-third day in a row with a high temperature in the 80s.

2 - 0.76" of of rain fell during the PM hours, with two-thirds of it falling between 10-11 PM (which was actually midnight-1 AM on 7/3, but the NWS doesn't recognize Daylight Saving Time; rather, it uses Standard Time year-round for its records). Then just 0.94" fell during the rest of the month. This followed an equally dry May and June in which just 1.56" and 1.49" was measured, respectively.  Today's conditions kept temperatures cool, with a high of only 69° reported (14 degrees below average).

4 - Today's high reached 95°, the first of twenty days with highs of 90+ this month.  Despite the heat I spent the evening in Central Park with my brother and his family to hear the New York Philharmonic give their 4th of July concert.

16 - This was the last of ten consecutive days of 90-degree weather (and twelve of the last thirteen), including three days in a row of triple-digit heat.  Average high during these ten days was 96°.

18 - High temperatures were in the 90s or 100s for thirteen of the past fifteen days.

17 - 3.20" of rain fell in a 12-hour period that began yesterday evening.  What fell from this storm was comparable to the amount that fell in all of June and July.

28 - The 5.41" of rain that fell this month was more than what fell in the previous three months combined.  0.53" fell today, the last rain of the month and it poured down in just one hour, between 4-5 PM.

3 - Today's high of 95° marked the last day of a 10-day hot spell in which six days had readings in the nineties.  During this week-and-a-half period the mean temperature was eight degrees hotter than average.

10 - One day after a balmy high of 78° (warmest temperature of the month), today's afternoon temperatures were only in the low 50s.  However, the cold front that moved through yesterday evening produced no rain and both days were sunny.

31 - Rain that began yesterday morning continued thru 10PM tonight.  During this day-and-a-half of inclement weather 1.68" of rain fell, 0.71" of which fell today.  For the entire event the rain came down hardest during the Greenwich Village Halloween Parade as 0.25" fell between 7 and 8 PM.

14 - The NYC Marathon was held today, the latest date the race has ever been run.  Despite the late date it was very mild, with a high/low of 72°/54° - 15 degrees warmer than average.

11 - The first snowfall of the season dropped a surprise 2.9" on Saturday afternoon.

31 - It was a very cold end to the year as the past six days averaged 11 degrees below average (high/low of 27°/16°).  This frigid trend would continue into January. 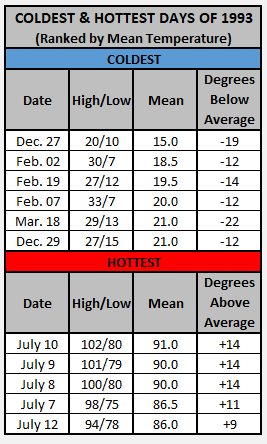 Tags: weather in New York during 1993