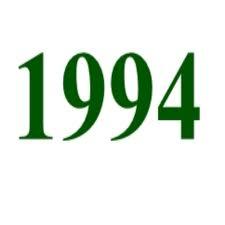 7 - A frustrating day for snow lovers.  Although today's high was 28° most of the 0.53" of precipitation that fell came down as freezing rain.  (0.9" of sleet/snow was measured at Central Park.)  This was the worst ice storm I can remember in the years I've lived in New York - luckily, the wires for electricity, telephones and cable TV for the City are largely underground.  Freezing rain and sleet were an unusually common occurrence this winter; between Jan. 3 and March 10 this icy precipitation fell on nineteen occasions.

17 - A winter storm sucked in more mild air than expected, resulting in a mostly rain event (after starting as a brief period of snow that accumulated 1.3").  1.34" of precipitation fell in total, a record for the date.  The temperature rose from 12° at midnight to 47° by early afternoon and began tumbling later on as another Arctic air mass moved in.

19 - The morning low of 2° below zero was the coldest reading of the winter and a record for the date.  This Arctic outbreak ranked with those of December 1989, January 1985, January 1982 and January 1977 for its widespread severity.

20 - This morning's low was zero degrees, a record for the date, but a two-degree "warm-up" from yesterday's low of minus 2°.

26 - 4.5" of snow fell during the morning, the largest snowfall of the month.  It was followed by Arctic air which dropped the temperature from 32° to 5° by midnight.

27 - Since Jan. 6 temperatures averaged nine degrees colder than normal, with an average high/low of 30°/14° - more typical of January temperatures in Chicago.

7 - For the first time since Jan. 3 there was less than an inch of snow on the ground in Central Park, a span of five weeks.  But the ground would lay bare for little more than a day as two snowstorms were on the way.

8 - After January saw a large amount of sleet and freezing rain New York finally got a storm that brought snow as 7.2" fell.  It came down especially heavy between 9 AM-1 PM, but snow predicted for the rest of the day didn't materialize as it came down as sleet instead.  After midnight an additional 1.8" of snow fell to bring the 24-hour total to nine inches.

10 - Today was the 25th day this winter with a high temperature of 32° or colder, one day more than the previous three winters combined.

11 - 12.8" of snow fell during a snowstorm that began shortly before daybreak and continued into Friday evening.  This was just three days after a nine-inch snowstorm and was New York's greatest accumulation since 1983, which also occurred on this date.

2 - With today's four-inch snowfall (an additional inch fell the next day), New York's total snowfall for the winter passed fifty inches, the most since the winter of 1977-78 (when 50.7" was measured).  Today's snow was the fifth that accumulated four inches or more this winter.

8 - Between Dec. 30 and today, a stretch of nearly ten weeks, there was at least one inch of snow on the ground in Central Park on all but three days.

17 - Today's high was just 37°, thirteen degrees colder than average and the fourth year in a row that was colder than the preceding St. Patrick's Day.

4 - The Yankees' home opener was played under ideal conditions as skies were clear and temperatures slightly milder than average (60°).  And the Bronx Bombers triumphed over Texas, 5-3.

11 - The temperature rebounded from a morning low of 42° to 68° under clear skies (until later in the afternoon when clouds moved in).  This was also the day of the Mets home opener which was played this afternoon.  Unfortunately, they fell behind early (8-1 in the 3rd inning) and lost to the Cubs 9-5.

23 - After a low of 56° degrees, the temperature rocketed to 91° under sunny skies - the first 90-degree day of the year.  Today happened to be the funeral of Jacqueline Kennedy Onassis, which was held in Manhattan. Additionally, this was the tenth day this year with a diurnal temperature variation of 30 degrees or more, the greatest number of such days of any year (breaking a tie with 1939).

25 - An evening thunderstorm (including hail, a rarity in Manhattan) delayed by three hours my 8:15 flight to Pittsburgh, where I was going to help my family make arrangements for my father's funeral.  (I finally arrived shortly before 1 AM.)

25 - Tropical conditions through mid-afternoon made the high of 88° feel like mid-90s.  Today was my brother's wedding out in north Jersey and I was his best man, so wearing a tux in this weather was a bit uncomfortable.  However, the poor bridesmaids arrived at the church wilted because the air conditioning in their limo didn't work.  Happily, drier air moved in just as the outdoor reception was getting underway.

30 - Today was only the third day this month with below-average temperatures, a month that was the warmest June since 1966.

7 - For the second morning in a row the low was a chilly 57°, a record for the date, and twelve degrees cooler than is typical in early August.

14 - Today, with a high of 91° degrees, was the last 90-degree day of the year.  In total, there were nineteen days with highs in the 90s this year, one more than average (and half as many as last year).

3 - This morning's low of 43° was the first reading in the 40s this fall, the latest date for this occurrence, and the first to occur in October, since 1982.  This reading was eleven degrees below average.

30 - Today's high of 75° was the warmest reading of the month (and seventeen degrees above average).  The last time it was this warm was five weeks earlier.

6 - This was the fourth day in a row with a high in the 60s.  During these days the high averaged 63°, 17 degrees above average, and more typical of mid-October.  The average low was also milder than the typical high for this time of year (49° vs. 46°).

12 - With a high/low of 31°/24°, today was the first day of the winter completely below freezing.  It was the only such day in December. 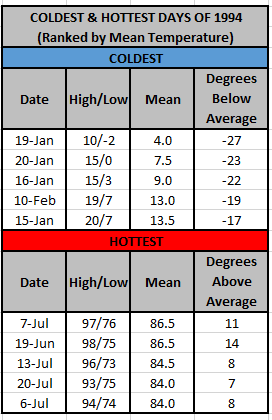