4 - Of the 11.8" of snow that fell this winter, 10.8" of it fell today as wet snow fell furiously on this Saturday morning (close to three inches fell between 6-7 AM) before changing over to rain at around 9AM.  Then the coldest air of the winter moved in overnight.

6 - Today's high/low of 20°/6° made this the coldest day of the winter, nineteen degrees below average.

13 - The past nine days were nine degrees colder than average, with seven having afternoon highs below freezing.  The rest of the month would have slightly above average temperatures.

21 - The past nine days all had above-average temperatures, with a mean temperature nine degrees above normal.

4 - A vigorous cold front passed through in the early afternoon and the temperature plummeted 40 degrees by midnight, from 68° to 28°.

28 - Partly cloudy and mild with temperatures in the low 70s, a perfect day for the Mets home opener, a game in which they slowly wore down the Cardinals and overtook them late in the game to win 10-8.

12 -  In just fifteen minutes a torrential downpour during a thunderstorm dumped 0.68" of rain between 12:28-12:43 AM.  Showers later that afternoon brought the day's rainfall total to 0.99", which accounted for half of the month's total rainfall.

18 - A sunny and hot Father's Day, the first 90-degree day of the year.  This was the latest date for this occurrence in ten years.

28 - This morning's chilly low of 54° was thirteen degrees below average and a record for the date.  It was the coolest reading since a low of 51° on May 16, more than six weeks earlier.

13 - Today's high was 92°, the fourth year in a row the high reached the nineties on this date.

15 - This was the hottest day of the summer as the high reached 102° after a low of 84° (one of the warmest morning lows on record).  The high was a record for the date.  This intense heat was produced by the same high pressure system that broiled Chicago for five days and resulted in the deaths of 750 residents.

17 - A torrential rainstorm dumped 3.36" of rain tonight between 10PM-1AM.  Incredibly, 2.09" fell in just an hour (10:19-11:19 PM).  I was attending the theater to see Ralph Fiennes in Macbeth when the skies opened up shortly after intermission.  Soon the rain was falling so heavily that it began dripping onto the stage.  When the play was over many of us hesitated going out into the deluge but theater management wouldn't let us linger.  This was the biggest 24-hour rainstorm since 3.20" fell on Aug. 16-17, 1993.

4 - Eleven of the past twelve days had high temperatures in the 90s, including a stretch of seven days in a row.  The mean temperature during these twelve days was seven degrees above average.  During this streak the highest temperature was 96°, which occurred , today being one of them.  The one day that didn't reach into the 90s had a high of 88°.

5 - Today was the twenty-fourth day in a row in which temperatures were above-average, the longest such stretch during any summer between 1953-2020.  All twenty-four days also had high temperatures of 85° or warmer, tying a similar streak in 1988.  Temperatures were six degrees above average during this span.  Additionally, 0.13" of rain fell today and it ended up being the wettest day of a record-dry August (just 0.18" was measured).

24 - In the midst of a mostly rainless August, the worst brush fires in sixty years ravaged parts of the Hamptons.

30 - This was the twenty-fourth day in a row with no rain.

26 - This was the seventh year in a row that rain fell on this date.  This year's amounted to 0.42" which fell throughout the day.

5 - 1.99" of rain fell, with 0.82" falling between 10 PM-midnight.  It was a record rainfall for the date, the first of three rainfall records this month.  This was also the first of four rainstorms during October that delivered more than an inch of rain.  The month ended with nearly eight inches of rainfall.

6 - The day after two inches of rain fell today's afternoon high was an unseasonably warm 86° (eighteen degrees above average).

13 - Today's high hit 86°, twenty degrees above the average high for the middle of October.

29 - 2.9" of snow fell this morning, the first snowfall of what would be a record-setting 75.6 inches during the upcoming winter.  Today's snow was the last in November of one inch or more until 2012.

3 - Although the mildest temperature in December is often in the 60s this year it was just 55° and it occurred today.

10 - With a high of 32° today was the first day of the winter with a maximum temperature of 32° or colder.  The high was reached early in the day and the mercury fell all day, reaching a low of 15° by midnight.

19 - Beginning today and continuing into tomorrow New York experienced its biggest December snowstorm since 1960 as 7.7" fell (10-12" had been predicted). 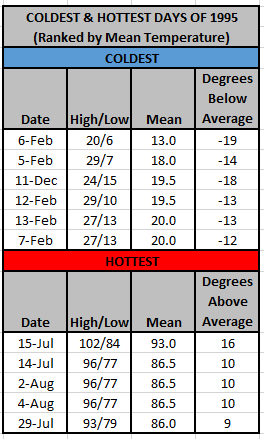