7 - A crippling blizzard began early in the afternoon and continued until noon the next day (Monday).  It immobilized an area from West Virginia through Massachusetts and dumped 20.2" on Central Park, the third greatest snow total in New York history (13.6" fell today and 6.6" the next day, both records for the date).  At one point five inches fell between 5-7 PM.  Besides the snow and wind, it was also quite cold, with a high/low of 22°/12°.

19 - 0.86" of rain fell during the afternoon, with most of it (0.64") coming down in just an hour (3-4:00 PM).  Rain throughout the Mid-Atlantic states produced disastrous flooding because it fell on top of the deep snow pack left behind from the blizzard of two weeks ago.

31 - Since 1970 an inch or more of snow has never fallen on this date.  The 0.9" that fell today is the most that's fallen.  It fell upon the arrival of an Arctic front that moved through late in the morning.  Today's snow brought the month's total snowfall to 26.1", making it, at the time, the second snowiest January on record (it's now third).

3 - 7.5" of snow, which was over by daybreak, fell in advance of the coldest air of the winter.  This was the the third snowfall of 6+ inches this winter (with one more of that magnitude two weeks later).  I had flown down to Key West for vacation the day before thinking I had escaped, but a few days later the Arctic cold penetrated all the way down to the Keys and it felt like more like fall.

5 - The morning low of +5° was the coldest reading of the winter. (The previous winter's coldest temperature occurred on Feb. 6.)

19 - Morning lows over the past four days were: 22°-21°-22°-21° (today) - eight degrees colder than average.  Then today's high rebounded to 42°, marking the beginning of an extended thaw that would see temperatures average 14 degrees above average between Feb. 20 and 28.

2 - With today's snowfall of 4.6" Central Park set a new winter snowfall record, with 66.3" measured.  It passed the winter of 1947-48 when 63.2" fell (and included, at the time, New York's largest snowfall of all-time).  Even more distance would be created between this and the previous record by an additional ten inches of snow in the next month.

8 - 4.5" of snow fell, pushing the season's snowfall past seventy inches.

29 - Beginning late last night and continuing through this morning, 4.1" of snow fell, the seventh snowfall of four inches+ this winter.  It brought March's snow total to 13.2", making it the snowiest March since 1967.  Besides being snowy, it was also a cold month, the coldest March since 1984.  Today's high/low of 41°/31° was the ninth day this month that was 10 degrees or more colder than average.

9 - Hard to believe that today's Yankee home opener wasn't postponed as the temperature was in the upper-30s and wet snow fell throughout the game.  Since the air temperature remained above freezing very little of the snow accumulated (0.3" was measured in Central Park).  Happily, the Yankees beat KC 7-3.

12 - Yesterday's high temperature was a pleasant 64° and tomorrow's would be a chilly 55°, but today was a brief taste of summer as the high rose to 80° - 20 degrees above average.

21 - This was the second day in a row with a record high as the mercury topped out at 93°.  The next 90-degree day wouldn't be for another two months (and it was the only other such day of the summer.)

10 -  Although it was just a spritz of rain, the 0.01" that fell this afternoon was the first measurable rain on this date in 15 years.

30 -  Rain fell throughout the morning until early afternoon.  Then after a three-hour break in mid-afternoon showers moved in again after 8:00.  Rainfall totaled 0.88", but we were spared flooding rains that hit eastern Pennsylvania, Maryland and DC, which received 5-10 inches.  Because of the clouds and rain the high temperature got no higher than 68°.

13 - Rain and wind from tropical storm Bertha moved in late on July 12 (a Friday) and continued until mid-afternoon today.  About two inches of rain fell and was accompanied by winds of 30-45 mph.  Western New Jersey and the lower Hudson River valley had the heaviest rain, picking up between three and seven inches.

31 - Between 9-10 AM 0.56" of rain poured down (and 1.01" fell for the entire day).  The final twelve days of July were all cooler than average, with temperatures six degrees below the norm.

4 - Today was the sixteenth day in a row with below average temperatures, the longest such stretch during any summer between 1980-2020.  The mean temperature during these days was close to six degrees cooler than average, with high temperatures ranging between 70° and 81° (normal high is 85°).  This was quite a contrast to the hot conditions of a year ago.

9 - Lunchtime was a soggy one as 0.82" of rain fell between noon-2 PM.  It was the biggest rainstorm of the month.

31 - An early forecast caused concern today, the Saturday of Labor Day weekend, when Hurricane Edouard was predicted to make landfall on Long Island.  However, the storm stayed away and the only effect from the hurricane was heavy surf, especially out in the Hamptons.

19 - Moving in shortly before daybreak, a nor'easter dumped 4.35" of rain, forcing postponement of Game 1 of the World Series at Yankee Stadium between the Braves and Yankees.  Nearly half of the rain came down between 3:30-6:30 PM with 1.07" falling in the hour between 4-5:00.  Not surprisingly, this was a record rainfall for the date.

13 - For the 15th day in a row no morning low was duplicated.  During this string of days low temperatures ranged between 30° and 62° degrees.

16 - Today was the sixth day in a row with temperatures 10 degrees or more chillier than average.  Average high of 41°/low of 32° during these days was 13 degrees below normal.  Five days had morning lows of freezing or below.

28 - A cold, cold day as the temperature stayed below freezing the entire day (high/low of 31°/23°) - the first time that's happened in November in seven years.  Additionally, the first measurable snow of the season dusted Central Park with 0.1".  Despite how little fell the next snowfall wouldn't be for another six weeks, on Jan. 9 (when just 0.9" was measured).

24 - Today's high was a very mild, and un-Christmas-like, 63° a record for the date - and more typical of holiday weather in Atlanta.

31 - A cold front moved through during the afternoon and by midnight the temperature had plummeted to 15°, with a wind chill near zero degrees when the ball dropped in Times Square. 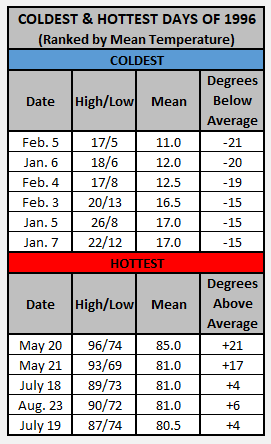