3 - The Arctic chill of the past few days was replaced by mild air which accompanied a storm system that produced 2.42" of rain, a record amount for the date.  The rain came down heaviest between 10-11 AM when 0.89" poured down.  Today's high was 51°, the only day between Dec. 31 and Jan. 6 to have a high temperature above freezing.

8 - 2.5" of snow fell.  This would be the winter's largest accumulation until mid-March.  The precipitation started as snow late in the morning, changed to freezing rain late in the afternoon and then to rain overnight.

12 - Today's high of 50° was reached just before midnight and was twice as warm as the bone-chilling temperature 24 hours earlier.

14 - Despite very cold temperatures (high/low of 22°/15°), light snow was mixed with sleet and freezing rain, producing an accumulation of two inches.

24 -Today was the eighth in a row with temperatures 10 degrees or more above average.  The high/low during these days was 51°/38°, fourteen degrees above average.  Today's high was 60°, with 1.04" of rain during the daytime hours.

30 - This was the 15th straight day with above average temperatures.  During this stretch temperatures were 10 degrees above normal.

15 - Beginning late last night five inches of wet snow fell, the biggest snowfall of the winter.  The temperature got no lower than 32° and made it up to 41° by afternoon.  This was the last snowfall of a winter in which just 12.7" fell.  By coincidence, last winter's biggest snow was also five inches and occurred around this time (March 22).

9 - A steady light rain fell between noon and 6PM and it resulted in the Yankees home opener being called after seven innings with the Yankees in the lead 12-3.  Not only was it rainy, but cold as the temperature fell all day.  By game time it was down into the mid-40s - quite a change from yesterday's 80-degree weather.

11 - For the past seven days low temperatures were between 54° and 56°, a few degrees milder than average.  Highs, however, were more variable, ranging between 58° and 73°.

23 - Scattered showers that fell throughout the day amounted to 0.30", the first rain on this date in 10 years.

29 - Memorial Day weekend began today and it may have been the nicest one ever as each day featured bright sunshine and high temperatures in the upper 80s (87°-88°-89°).

7 - Today's high soared to 94°, seventeen degrees above average, and the first 90-degree temperature of the year.

5 - Not surprisingly today's high of 101° was a record for the date.  It was also the earliest date with a triple-digit temperature since 1966.

22 - Between May 25 and today just one inch of rain fell (0.02" fell today).  The typical amount of rain during this period is approximately eight-and-a-half inches.

1 - This afternoon's high hit 98°, the hottest reading of the month.

2 - This was the last of eleven consecutive days with highs in the 90s, one day shy of New York's all-time streak of twelve days set in Aug/Sept of 1953.  During this streak the average high temperature was 94° and ranged between 90° and 98°.

7 - Today was the sixteenth day in a row in which the high temperature was 87° or higher.  Twelve of the days had temperatures in the 90s, including eleven in a row between July 23 and Aug. 2.  For the entire stretch of days the average high was 92°, eight degrees hotter than average.

21 - Unseasonably cool with a high/low of only 64°/59°, thirteen degrees below average.

26 - A torrential two-hour downpour during the morning rush hour paralyzed traffic and caused a system-wide shutdown of the subway.  While 1.53" of rain was measured in Central Park, other parts of the City were flooded by between 2.5 and 4 inches.

16 - Tropical storm Floyd flooded the area with 5.02" of rain, forcing many businesses to close early and causing service on some subway lines to be suspended because of track flooding.  Today's rainfall, a record for the date, was an inch more than what fell for the entire summer.  More than half of it fell between 8 AM and 1 PM, but an additional 0.76" fell from a final band of heavy rain that moved through between 7-8 PM.

19 - Today was the 17th day in a row without rain.  November would end with 2.33" of rain, about half of the month's average precipitation.

27 - Today was the eighth day in a row in which temperatures were 10 degrees or more milder than average.  The average high and low during these day, 63°/52°, was 12 degrees above typical late November temperatures.

13 - In the two weeks ending today, no two days had the same high temperature.

23 - Somewhat similar to this date last year, today was the twenty-first day in a row with above average temperatures.  Temperatures were seven degrees above the norm during this three-week span.

24 - Today's high of 30°, ten degrees colder than average, was the first high temperature of 32° or colder this winter. 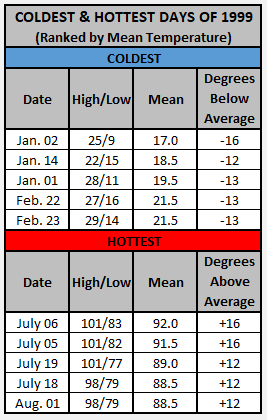