3 - Today was the 13th day in a row in which the high temperature failed to rise above freezing.  This was three days fewer than the all-time streak of sixteen days which occurred in Jan/Feb 1961.

21 - A quick-moving snowstorm dumped six inches of snow this Sunday morning, a record for the date.  The snow was over by 8 AM.

12 - The morning low of 16° was the coldest reading of the winter.  Two days earlier the numbers were reversed when the high reached 61°.

6 - For the past few days a monster snowstorm (which The Weather Channel labeled "The March Lion") had been forecast with 12-18" predicted at one point.  However, it was a bust as only 3.5" fell (two inches yesterday, 1.5 inches today).  The storm developed further north than was expected, sparing the City and NJ.  Long Island's Suffolk County, however, was walloped with 10-15" of snow.  The earlier forecast created a panic and many schools and businesses in the City closed yesterday.

2 - The weather for today's Yankee home opener was very similar to last year's game as the high was a chilly 49° under mostly overcast skies.  This was the ninth day in a row with a high chillier than 50°.

9 - A passing cold front produced a 30-minute downpour in which 0.43" of rain fell between 6:45-7:15 PM.  Earlier in the afternoon the temperature topped out at 78°, the first 70-degree reading of the year and the warmest temperature since Oct. 3.  (The Mets played their home opener this afternoon, but at Shea Stadium temperatures were cooler, in the mid-60s.)  By contrast yesterday's high was just 45°.

22 - Today was the first of 26 days in a row with no measurable rain in Central Park, the second longest stretch of rain-free days in the 1980-2015 period.  The longest dry streak in this period was 35 days set two years earlier.

24 - After soaring to 87° in the early afternoon (the warmest reading of the month) a cold front moved through and by midnight the temperature had fallen to 52°.  The colder air was made even chiller by wind gusts of between 30-40 mph.  This was the third day in a row with 80-degree temperatures and today's high was the warmest in more than eight months (since Aug. 9).

4 - This was the third day in a row of 90-degree heat and the fourth day in a row with a record high temperature.  This somewhat mirrored an early hot spell last year in early May (5/5-9).

12 - The first twelve days of May were twelve degrees warmer than average with no rain, but the rest of the month would experience temperatures four degrees below average with two inches of rain.

18 - A pre-dawn shower that delivered just 0.07" of rain ended an extended dry spell of twenty-six days.  (Only a 35-day drought that occurred two years earlier in May/June 1999 was longer.)  Then between May 21-29 rain fell on eight of the nine days, amounting to nearly two inches.

26 - This was the seventh day in a row in which the high temperature failed to reach 70°.  Average high during this week was just 61°, thirteen degrees cooler than average - quite a contrast from the first four days of the month which had an average high of 90°!

27 - Although just 0.08" of rain fell it was the first rain on the Saturday of Memorial Day weekend in eleven years.

17 - A lot of rain fell overnight and throughout the morning, totaling 1.53".  This was a record amount for the date (broken ten years later).  And despite this being the rainiest Father's Day of the 1970-2019 period, skies cleared rapidly in the afternoon, salvaging the holiday.

2 - The morning low was a refreshing 56°, twelve below average, and tying the record set way back in 1888.  It wouldn't be until mid-September that a cooler temperature would be reported (53° on 9/14).

25 - Today's high was 94° after a low of 77°, making it the hottest day of the month.  This was just the fifth (and last) day with above average temperatures this month.

7 - It was a blistering hot day as the temperature soared to 99°.  This happened to be the day the ad agency I worked for held a summer picnic in Central Park.  Most of us spent lots of time in the shade.

10 - Today's high of 97° was a "cool-down" from yesterday's searing reading.  It was also the last 90-degree reading of the summer, coming about three weeks earlier than normal; the 15 days of high temperatures in the 90s/100s were three fewer than average.

10 - It was a warm and sticky day, but then a passing cold front produced thunderstorms in the late afternoon and evening.  The evening thunderstorm dumped 0.57" of rain between 7:15-7:45 PM.  Skies cleared afterward, making for optimal flying conditions the next day throughout the Northeast.

11 - Today dawned with bright blue skies, providing a surreal backdrop when terrorists crashed two hijacked planes into the twin towers of the World Trade Center during the morning.  Winds out of the west/northwest kept much of the billowing smoke from the collapsed towers from blowing north over Manhattan.

14 - Three days after the 9-11 attacks 1.90" of rain fell during the morning, hampering rescue and recovery operations down at Ground Zero.  Later that day President Bush visited the site.

4 - The only reason to mention the 0.01" of rain that fell tonight between 11:00 and midnight is because it was the first rain on this date in 15 years.

1 - After experiencing the mildest November on record (later tied in 2015), December began with temperatures that were 19 degrees warmer than average.  After a mild morning low of 52° today's high reached a balmy 69° (closer to what's typical for early October).

5 - Today's high was an unseasonably mild 70°, a record for the date, and twenty-three degrees above average.

6 - Today's high was 71° (twenty-five degrees above average), one degree warmer than yesterday, and another record.

16 - This morning had the first low of 32° or colder this season - the second latest date on record for this occurrence.  (The latest date for the first freeze occurred three years earlier, on Dec. 22.)

30 - Today was the first day this winter with a high temperature of 32° or colder.  There would be just two other such days for the rest of the winter (the average number is 17). 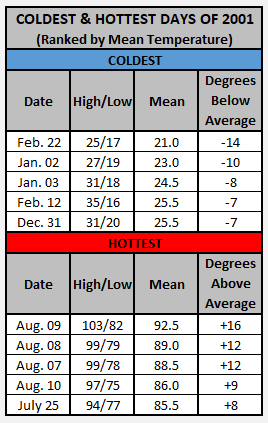 Posted in By Year | Permalink | Comments (3)

Tags: weather in New York during 2001

I am not a American, but I do remember seeing the September attacks on the Television. It wasn't that cold in the Netherlands that year if I remember correctly, but I was wondering how the weather was in NYC at the time. This site is about the only source I could find with some information.

It's good that this information stays alive for later generations!

The weather belied the day's events as skies were clear, temperatures seasonably warm (high/low of 81/63, and the humidity was low. When people talk about the events of 9/11, many comment on the beautiful weather. And to this day anytime we have nice conditions like this, I feel a bit of anxiety because it reminds me of 9/11.