7 - The first snow of the winter fell today, a light snow that accumulated 0.5" during the afternoon.  This was the fourth winter of the past eight in which the first measurable snow didn't occur until January (average date is Dec. 14).

19 - The typical snow season in New York lasts about three months (from mid-December to mid-March), but this winter it was less than two weeks.  Today's 3-inch snowfall was the last measurable snow of the season and came thirteen days after the first (when 0.5" fell).  For the entire winter just 3.5" fell, the second least of any winter (the least was during the winter of 1972-73 in which 2.8" fell.)

29 - The afternoon high soared to 69°, thirty-one degree above average, and a record for the date.

5 - The morning low of 19° was the coldest reading of the winter, later tied on 3/5.  This was relatively mild for the coldest temperature since, on average, it is 9°.

5 - With a high/low of 35°/19°, this was the first day this year with a mean temperature 10 degrees colder than average - and the first such day in five months.  The morning low tied 2/5 for the coldest reading of the winter.

3 - The temperature nosedived from 77° (twenty-one degrees above average) to 42°.  This temperature drop was accompanied by 30-40 mph wind gusts.

5 - For the third season in a row, the weather for the Yankees' home opener was very chilly, with a high of only 45°, twelve degrees colder than average.

17 - Today's high was a sizzling 96°, tying April 18, 1976 as New York's hottest day ever in April.  Today's departure from the norm was +35 degrees, one of the greatest departures on record.  Furthermore, this morning's low of 74° was the earliest date ever for a low in the 70s.

19 - The four-day summer heat wave that Mother Nature cut & paste in the middle of spring resulted in an average high/low of 92°/71°, which was 26.5 degrees above normal.  After highs in the 90s the previous three days, today "cooled down" to 89°.  The next 90-degree day wouldn't be for another two months (June 26).

4 - Today was the fourteenth day in a row with below-average temperatures (five degrees below average).  This was in stark contrast to mid-April's heat wave in which seven days had temperatures that averaged 23 degrees above normal.

21 - This was the last of four consecutive days with morning lows in the chilly low 40s, well below the average low of 55°.

3 - After a very uncomfortable morning low of just 82° the steamy afternoon high topped out at 95°.  This was the earliest date for a low in the 80s since the summer of 1952.

19 - This was the third day in a row in which the high hit 94° (yesterday and today set new records).  It was also the seventeenth 90-degree day since July 29, a three-week period that had heat waves of eight days and nine days.  The average high during these two heat waves was 94°, ten degrees hotter than average.

4 - Today's high of 32° (after a low of 20°) made this the first day of the winter with a maximum temperature of 32° or colder, two weeks earlier than normal.

11 - Fourteen of the past fifteen days were colder than normal, with temperatures eight degrees below average (high of 38°/low of 27°).  This afternoon a cold rain fell, measuring 1.11".

25 - A sloppy winter storm produced the most precipitation ever measured on Christmas Day (1.30") and the most snow (five inches) since 1909 when seven inches fell (the most ever).  Morning/afternoon rain changed to snow later in the afternoon.  This was the first Christmas snowfall of one inch or more in thirty-three years - and the last time measurable snow fell on the holiday (through 2019). 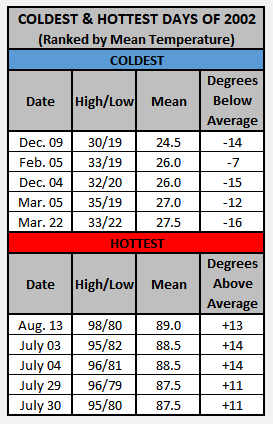 Tags: snow on Christmas in New York, weather highlights from 2002 in New York

Surprised you didn't mention a really interesting stat: On October 7, Central Park, JFK, and LaGuardia all had their last 70-degree reading of the year, the earliest date on record for the occurrence at LGA and JFK, as well as the earliest in over a century (2nd earliest all time) at Central Park.