1 - The year began on a rainy note as 1.52" fell, making this the rainiest New Year's Day since 1923.  The rest of January would be very dry so today's rain accounted for two-thirds of the month's total precipitation.

13 - Today's high of 40° was the mildest reading during the twenty-two days between Jan. 11- Feb. 1.  During this three-week period temperatures were ten degrees colder than average.

25 - Today was the twelfth day in a row in which the high temperature failed to rise above freezing.  The average high during these days was 27°, eleven degrees colder than normal.

28 - Fourteen of the past fifteen days had high temperatures that were below freezing.  However, despite this cold snap just 2.6" of snow fell.

29 - In the past four days very cold and dry air produced 2.5" of powder/fluffy snow from just 0.04" of liquid precipitation.  Today was the eighth day this month with measurable snowfall, which was notable since only 4.7" of snow fell during the month.

16 - This was the coldest day of the winter, with a high of just 15° and a low of 8°, twenty-two degrees below average.  After nightfall a fierce blizzard moved up the coast and by midnight 3.5" of snow had fallen.  Winds gusted over 40 mph producing below zero wind chills.

18 - Eight of the past thirteen days had highs at freezing or colder and twenty-six inches of snow fell.  Temperatures were nine degrees below average during these thirteen days.

21 - Today's and yesterday's highs of 50° were the mildest temperatures during a very cold month (the coldest since 1979).

13 - The past twelve days were seven degrees colder than average.

31 - In 1998 the Mets were wildly lucky when their home opener on March 31 was played in record warmth (86°).  Their luck didn't hold out this year.  Although the game was played under clear skies the temperature hovered around 40° and a biting wind created a "feels like" temperature of 30°.  No surprise that this was the coldest Opening Day in the 1970-2015 period.  To make it even worse they were destroyed by the Cubs by a score of 15-2.

7 - The four inches of snow that fell today, the last snowfall of the winter, was the biggest April snowfall in twenty-one years.  This brought the season's snowfall total close to 50 inches.  Today's snow forced postponement of the Yankees' home opener.

8 - Yet another cold start to the Yankees' season.  This game tied the snowy one of 1996 as the coldest home opener in the 1970-2015 period and was played one day after four inches of snow fell.  The temperature at game time was just 37°, twenty-one degrees below average, and more typical of mid-winter.

11 - Since March 30 (a span of thirteen days) the mean temperature was nine degrees below average, with a high/low of 46°/34°.  Today was the eighth in a row with a low temperature in the 30s, the longest such streak during the spring since one of thirteen days in 1975.

12 - The day before the 13-day streak of chilly weather began on March 30, the high reached 69°.  And today, the day this chilly spell ended, the temperature once again topped out at 69°.

16 - The afternoon high soared to 88°, twenty-seven degrees above average.  Then a back-door cold front moved through and the temperature dropped to 51° by midnight.  Today's high wouldn't be topped for ten weeks.

17 - After a back-door cold front dropped yesterday's summery temperatures nearly 40 degrees, today's temperature fell slowly throughout the day and was down to 36° by midnight.  This was one year after the high reached a broiling 96° on this date.

26 - We were stuck in an unseasonably cool pattern similar to one we had two years ago in May.  Today and the previous four days were 11 degrees cooler than average.  Two days had a high/low of 56°/50° and two others were at 56°/51°.  Not only was today cool but rainy as well, with 1.28" of rain measured (the most precipitation in a 24-hour period since the big snowstorm on President's Day).  Unfortunately, this coincided with Memorial Day weekend (5/24-26).

30 - Today's high of 79° was the warmest temperature of the month and only the second time in twenty-five years that May had no readings of 80° or higher.  (It would happen again in 2005.)

7 - Nearly eight inches of rain fell since May 21, with rain falling on thirteen of these eighteen days.  And every day but one had cooler than average temperatures.  Today's rainfall totaled 0.90" and fell largely between 11 AM-7 PM.  Five more inches of rain would fall in June, which became the rainiest on record with 10.26" measured.

24 - Today, with a high of 93°, was the first 90-degree reading of the year, coming more than three weeks after the typical first 90.  It was also the first day of a four-day heat wave.

14 - It was sunny and hot (91°) when the power went out late in the afternoon throughout New York, New York's third major blackout.  For much of the City the electricity remained off until the following afternoon.

14 - Today was one of four days this month in which the high reached 80°, the warmest reading of the month - and the coolest maximum temperature for any September in more than 50 years.  However, the month's overall temperature was slightly above average (+0.5°).

2 - The NYC Marathon was held today and the afternoon high of 68° (10 degrees above average) was the mildest temperature on race day since 1994, when the high reached 70°.

3 - Today's high temperature of 79° was twenty-one degrees above average.  Besides being the warmest day of the month it was also the warmest day in 6-1/2 weeks since it was 80° on Sept. 20.

3 - Today was the first day with a high of freezing or colder this winter, one day earlier than last year.  And today's high/low of 31°/21° was very similar last year's first freezing-or-colder day (32°/20°).

5 - Snow fell during the afternoon and lasted into early evening, accumulating eight inches, coming one year after six inches fell on the same date (and the fifth time in the past twenty years that the first snow fell on Dec. 5).  This was part of a two-stage storm that brought more significant snowfall the following day.

6 - The City was under a blizzard warning for much of the day as an additional six inches of snow fell on top of yesterday's eight-inch snowfall.  The high temperature was only 28° after a low of 23°.  Just a week into the month and this was already the snowiest December since 1960 when 19.8" fell. 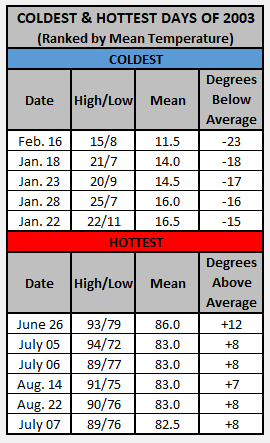 Tags: weather in New York during 2003