1 - Today's afternoon high of 60° was the mildest start to a year since New Year's Day 1979 and 1973, and two degrees shy of the all-time warmest back in 1966.  It also marked the start of a very mild first half of January in which temperatures averaged 11 degrees above the norm.

14 - Today's high of 66°, which occurred in the pre-dawn hours, was the 17th day in a row with above average readings.  A streak of 17 consecutive days with below average temps would begin tomorrow.  About an inch of rain fell in the morning and afternoon as cold air moved in.

15 - For the first time this year (and since 12/29) the temperature dropped below freezing - and the following nineteen days in a row would also have lows of 32° colder (as well as eleven of the high temperatures).  This was the latest into the year for the first low of 32°.  Today's low of 26° was forty degrees colder than yesterday's high.

28 - Although today and yesterday had different highs and lows (yesterday's was 18°/9°, today's was 22°/5°), they both had the same mean temperature (13.5°), which made them the coldest days of the winter.  Today was the eighth time this month with a low temperature in the single digits.  All of them occurred in the past eleven days.  This was the same number as last January but this year's were more concentrated.

14 - Rain fell throughout the afternoon and evening, amounting to 0.95" and putting somewhat of a damper on New Yorkers' romantic plans.

20 - The first measurable snow of the month fell today and over the next ten days three small snowstorms of five inches+ would pass through, dumping a total of 18.7" of snow.  The first storm moved in this evening after 9:00 and five inches had accumulated by the time the snow ended at 10 AM on the 21st.

Feb 28-March 1, 2005 - March came in a like a lion camouflaged as a lamb from all of the snow that was covering him.  7.7" of snow fell from a storm that began the afternoon of Feb. 28 and ended at daybreak on March 1.  It wasn't a cold storm as the temperature rose into the low 40s after the snow ended.

8 - An Arctic front combined with a rapidly developing nor'easter wreaked havoc during the afternoon and evening.  Accompanied by 40-50 mph winds, the temperature dropped like a rock, from 57° to 18° degrees.  A burst of snow fell on top of a coating of ice formed when rain-soaked pavements froze.  1.5" of snow fell in NYC while many suburbs had 3-5 inches.  Besides making driving difficult, the icy surfaces made walking very challenging, especially with the howling winds.

9 - Today, with a high/low of 31°/16°, was colder than any day in February, and the coldest day since 1/28.  Gusty winds produced "feels like" temperatures in the single digits and teens.

23 - It was a wet and windy day with rain that began late in the morning and ended as the season's last snowfall late in the evening.  (It was also the first time in 12 years that precipitation fell on this date.)  An inch of snow fell, bringing the winter's snowfall to 41 inches.  This was the unprecedented third winter in a row with more than 40 inches.

28 - My flight back from Pittsburgh after visiting my mother for Easter took eight hours because of heavy rain and thunderstorms in the New York area.  2.98" rain fell, a record for the date.  This was the biggest rain producer in six months, since tropical storm Jeanne dumped 4.66" at the end of September.

25-  Gray skies and light showers made for a very chilly day as the high reached only 53°, twenty degrees chillier than average - and more typical of March 25 than May 25.

8 - Today's high was 93°, the first reading in the 90s this year (and it occurred one day earlier than last year).

5 - Today's high was a scorching 98°, the fourth day in a row with temperatures in the mid-to-upper-90s.

25 - This morning's low temperature of 65° was the coolest reading of a hot month.

1 - Today was the 53rd day this year with a low temperature of 70° or warmer, passing 1980 to become the year with the third most such lows on record (behind 1906 and 1908).  And there would be six more such days in September and one in October.

13 - Today's high was 92°, fifteen degrees above average, and the last day of the year with a reading in the 90s.  In total, the year had twenty-three days of 90+ - six more than average (and quite a jump from last year's two).

22 - For the past nine days high temperatures were between 82° and 85°, averaging 10 degrees above average.

23 - Today's afternoon high reached a summer-like 87°, the 35th day in a row in which the temperature rose into the 80s.  During this five-week stretch temperatures averaged six degrees above the norm.

30 - Today's high/low of 67°/50° made this the only day this month that had cooler than average temperatures (four degrees below normal).  Not only was this one of the mildest Septembers on record (+5.8 degrees), but one of the driest (0.48 inches).

7 - This morning's low of 70° was the latest date on record for a 70-degree low, breaking the previous record of Oct. 1, set in 1954.  (Average low for this date is 54°.)  This was also the year's sixtieth 70-degree low, the second greatest number on record, one less than 1906.  (Average amount is 36 days.)  Despite the day's mild low the temperature rose only six degrees due to a cloud cover.

8 - Rain that began last night continued for thirty-two consecutive hours, totaling 4.49" by midnight.  This was the first in a series of huge rainmakers that dumped nearly 17 inches of rain on the City in a 2-1/2 week period.

12 - Four days after a rainstorm dumped 4.49" on the area, an additional 4.26" flooded the area today.  Today's rainfall was a record for the date.

13 - Following yesterday's record 4.26" rainfall a record was set for this date as well as rain fell for much of the day and amounted to 2.75".

25 - In less than three weeks (Oct. 8-25) nearly 17 inches of rain fell, making this the wettest October on record (and the second rainiest month overall).  During this two-and-a-half week period of deluges, seven days received an inch of rain or more.  In stark contrast, September had just 0.48" of rain.

24 - It was Thanksgiving Day and very cold air moved in later in the afternoon, dropping the temperature from 49° to 24° by midnight.  Light showers fell before and after the Macy's parade.  (To read more weather highlights of other Thanksgiving holidays double click here.)

4 - The first snow of the winter fell this morning as 2.5" accumulated between 3-9 AM.  Then it changed to a light drizzle for a few hours until the precipitation ended.

7 - Today's high was 32°, making it the first day this winter with a temperature of freezing or below.

14 - Today's high/low of 24°/14° made it the coldest day of the winter of 2005-06, a winter that was on the mild side (especially January, which was 8.8 degrees above average).  This was the earliest date for the coldest day of winter since the winter of 1988-89, when it arrived on Dec. 12.  Today's high/low was nineteen degrees colder than average.

15 - This was the thirteenth day in a row with a high colder than 40°.  The average high/low during this nearly two-week period was 34°/25°, ten degrees colder than average. 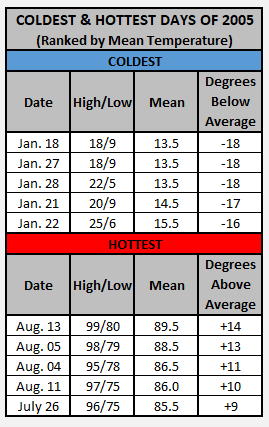 I thought you might find it interesting that I just used your
snowfall data for the first scene of my soon-to-be-published novel, "Pride’s
Children". It starts in Feb. 2005 (evening of the 25th), and I needed snow on the
ground in enough depth to make the sidewalks slippery, with snow piled on the
sides, as it gets in NYC. I moved the scene from the 11th to the 25th (plot
reasons), so I had to check the snow and the moon’s phase (shifted from new to
almost full in two weeks).

So thanks for putting the data up for people like me to use!