6 - Today's high of 72° tied Jan. 26, 1950 for the warmest reading ever recorded in January.  This was 33 degrees warmer than normal and more typical of mid-May.  A bonus was that it happened on a Saturday.

8 - Although it was a record for the date, today's rainfall was a relatively modest 1.25".  Much of it fell between midnight and 4:00 AM, but it continued through midday.  This was also the last day of an eight-day streak with mean temperatures 10 degrees or more above average (including Jan. 5 and Jan. 6, which were 26 and 31 degrees above average, respectively).  The last time temperatures were below average was on Dec. 9.

10 - The winter's first trace of snow fell today, the latest date in New York's history for this occurrence.  It was also the 32nd day in a row with an above average daily mean temperature - and the first day to have a below-freezing low since Dec. 9).  During this span temperatures averaged 12 degrees above normal.

19 - After four consecutive winters with 40+ inches of snow this winter's first measurable accumulation which fell this morning was one of the latest on record.  And it wasn't much as just 0.3" fell shortly after sunrise.

12 - Today's seasonably cold high of 40° was the mildest reading in the three-week period between Jan. 29 and Feb. 19.  During these days temperatures were nearly nine degrees colder than average.

14 - A nasty sleet storm during the morning and afternoon hampered traffic and snarled air travel.  Jet Blue was crippled as its fleet at Kennedy Airport was incapacitated for a number of days.  0.94" of liquid precipitation was measured at Central Park, and two inches of sleet accumulated on the ground.  The day's precipitation represented half of February's total.  Despite a high of 29°, little of the day's precipitation fell as snow.

19 - Thirteen of the past sixteen days had morning lows in the teens and eleven had highs at freezing or below.  Average high/low during these days was 30°/17°, 11 degrees colder than normal.

28 - This was the coldest February since 1979, 6.3 degrees colder than normal.  However, despite the cold conditions just 3.8 inches of snow fell.  Today was one of the handful of days with above average temperatures (high/low of 46°/35°).

9 - Today's low of 13° was the fourth day in a row with a morning low in the teens.  The average low of 14° during these four days was 21 degrees colder than normal.  This is the last time March had four consecutive days with lows in the teens.

16 - An all-day onslaught of sleet and snow dumped 5.5" of icy precipitation, the biggest snow of the winter.  This storm somewhat resembled last month's severe sleet storm on Valentine's Day, but this one had considerably more snow.  The total amount of precipitation was 2.07", a record for the date.  This was the last snowfall of the winter, a winter in which just 12.4" of snow fell, quite a contrast from the previous four winters, all which had at least forty inches of snow.

30 - Today had one of the lowest humidity levels on record as it fell to a Sahara-like 6% at 4 PM (typical humidity level at this time of day is around 47%).  Although the temperature rose into the upper 60s (13 degrees above average) the extreme dry air made the air feel chillier, especially when the sun went down.

9 - The Mets home opener was played under sunny skies but chilly temperatures as the high of 49° was nine degrees below average.

15 - An intense nor'easter that struck on this Sunday dumped 7.57" of rain, the second greatest 24-hour rainfall in New York history.  Three inches fell between noon-4 PM (including 1.19" in one one-hour period); another period of torrential rain dumped an additional 1.70" between 9-11 PM.  In between these two periods of torrential rain there was a period of calm, even a bit of clearing, somewhat resembling the eye of a hurricane.

16 - After yesterday's tremendous rainfall an additional 0.84" fell this morning.  In total, rain fell for 36 consecutive hours.

19 - Today was the 16th day in a row with colder than average temperatures, the longest such string of days during springtime for the period 1980-2015.  During this streak the mean temperature was eight degrees chillier than average.  Nine days had lows in the 30s.

21 - After a seasonable low of 45° the afternoon temperature jumped to a high of 79° (sixteen degrees above average).

25 - For the sixth year in a row rain fell on this date as mid-afternoon showers amounted to 0.14".

25 - Today, with a high of 90°, was the first 90-degree day of the year, about a week earlier than the average date for this occurrence.  This broke a string of four years that had their first 90-degree temperature in June.

2 - This was the tenth day in a row with a high temperature of 80° or higher.  The average high during these days was 86°, twelve degrees warmer than normal.

3 - Rain began in the evening and by midnight 1.62" had fallen.  This was the fifth year in a row in which rain fell on this date.

4 - After beginning the night before, nearly four inches of rain was dumped on the City as the remnants of tropical storm Barry moved through.  The rain was over by noon.  The amount that fell from the storm was twice as much as fell during the entire month of May.

11 - A thick haze prevailed during the daylight hours but then a cleansing cold front moved through in the early evening, producing thunderstorms that dropped 1.10" of rain between 5-8 PM.  Much of it, 0.78", poured down between 5-6 PM.

23 - In the past four weeks rainfalls of one-inch+ occurred each week.  Today 2.31" of rain fell, with most of it (1.91") falling between 7 AM-noon.  Because of the rainy conditions the high only made it to 72°, thirteen degrees cooler than average.

8 - Tremendous thunderstorms moved through the City before daybreak, dumping 2.50" of rain and shutting down much of the City's subway system.  Between 4:36-5:36 AM 1.91" of rain came down, the greatest one-hour downpour since July 17, 1995 (when 2.09" fell).  Also, a rare tornado wreaked havoc in parts of Brooklyn.  Later in the afternoon the temperature rose to 90°, which was the last 90-degree reading of the year, three weeks earlier than usual.  In total the year had only ten days in the 90s, well below the average of eighteen.  All of the highs were in the 90° to 92° range.

10 - A couple of showers at daybreak and during lunchtime produced 0.13", breaking a streak of nineteen rain-free days.

15 - Early morning showers between 3-6 AM amounted to 0.08", making this the sixth year in a row in which rain fell on this date (and in eight of the past nine years).

26 - Today's high was a sultry 87°, fourteen degrees warmer than average.

8 - Today's sultry high of 87° was a record for the date and the fifth day in a row of 80-degree weather, the longest such streak in October since 1990.  Normal highs for the first week of October are typically in the mid-to-upper 60s.

11 - Today was the 22nd consecutive day with above-average temperatures, the longest such stretch during the autumn in the period 1980-2019.  During these days temperatures were nine degrees milder than average.  A cold front moving through during the afternoon triggered storms that dumped nearly an inch-and-a-half of rain, with an inch of it falling in a two-hour period ending at 6:30 PM.

23 - Today's low was a balmy 66°, nineteen degrees above average and five degrees warmer than the typical high for the date.  The afternoon high got up to 78°.  The past three weeks were nearly ten degrees warmer than normal with fourteen days having temperatures 10 degrees or more above average.  No big surprise, this would be the mildest October on record.  Today was the 12th day this month with a low in the 60s, the most in October since Oct. 1879's 13 (Oct. 2017 would also have 12 such lows).

31 - This October tied 1947's as the mildest on record, a whopping seven degrees above average.  And today was one of the twenty-five days this month with above-average temps (high/low of 64°/49°, five degrees above normal).

24 - This morning's low of 26° was the coldest reading of the month and came two days after the month's mildest reading.

2 - The first snow of the winter fell this morning, the earliest date in eleven years (when it occurred on Nov. 28).  This morning's low of 20° was the coldest reading of the entire month.  Today's 1.4" accumulation was washed away when rain moved in at around 10 PM.

16 - An overnight lashing of sleet and rain produced 0.84" of precipitation and an inch of frozen precipitation.  Then a cold front moved through after dark, producing 40-60 mph wind gusts. 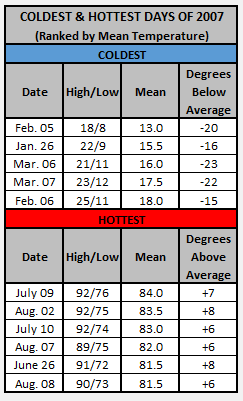