3 - With a bone chilling high of just 20° (and wind chills in the single digits), today was the first day this winter to be completely below freezing.  This was the latest date for this first freezing-or-colder occurrence in 21 years (when it happened on Jan. 20, 1987 - the latest date ever).  Combined with a low of 12°, this would be the coldest day of the winter - seventeen degrees below average.

12 - This was the seventh day in a row with a mean temperature at least 11 degrees above average.  The average high/low of 56°/43° during this week-long mild spell was 18 degrees warmer than normal, more typical of early April.

31 - Only a trace of snow fell this month, tying 1933 as the least snowy January on record.

12 - Snow began during the afternoon and after 2.8" accumulated it changed over to sleet and freezing rain during the evening.  The next day the storm continued as a big rainmaker.

22 - Six inches of slushy snow fell during the morning thru early afternoon, the biggest snowfall of the winter - and the largest accumulation since New York's all-time snowstorm two Februarys ago.  Today's snow was also a record for the date.

1 - Game-time temperature was 67° (eleven degrees above average) under mostly overcast skies as the Yankees won their eleventh home opener in a row (after yesterday's game was postponed due to rain).

12 - A showery Monday morning (0.33") was followed by a raw and chilly afternoon.  This was the sixth year of the past seven in which rain fell on this date.  Today's high/low of 54°/45° was eleven degrees chillier than average.

29 - New York's Gay Pride Parade was interrupted by occasional tropical downpours between 1:30-5 PM (amounting to 0.59").  Before these thunderstorms popped up the temperature rose to 89°.  (For weather highlights during other Gay Pride Parades click here.)

20 - The 0.01" of rain that fell today in the late evening was just the second time measurable rain fell on this date in the past 19 years.  During the daytime the temperature rose to 94°, the fifth day in a row of 90-degree heat.

21 - This was the last day of six-day heat wave, which accounted for half of the summer's 90-degree days.  High temperatures during these days ranged between 92° and 96°.

6 -Today's high of 87° was one degree above yesterday's high, two degrees warmer than two days ago and three higher than three days ago.

6 - Tropical storm Hanna dumped 3.54" of rain, mostly between 2-8 PM.  Rain was heaviest between 4-5 PM when 0.97" poured down.  As a hurricane Hanna devastated Haiti and killed more than 500 people.  It made landfall in the US near Myrtle Beach, SC.  The rainfall Hanna dumped on New York was the biggest 24-hour soaker of the year and the most in sixteen months.  It was also a record rainfall for the date (and the first rain on this date in 12 years).

26 - The morning was a very soggy one as heavy rain amounted to 2.34", most of which fell between 2-9 AM.  This was a record rainfall for the date.

21 -Although it was an inconsequential amount, the 0.01" of rain that fell during lunchtime was the first rain on this date in 12 years.

4 - With a high of 63° this was the mildest presidential Election Day since the election of 1956 when the temperature rose to 64° (when president Eisenhower was re-elected).  However, today's temperature was just five degrees milder than average.

23 - This was the sixth day in a row with temperatures 10 degrees or more below average.  It was also the sixth consecutive day in which the low temperature was at freezing or below, matching November streaks of similar length in 1997 and 2000 (the lengthiest in the 1962-2013 period).  The average high/low of 37°/26° during this cold snap was 14 degrees colder than normal.

9 - In a 36-hour period the temperature jumped from 19° yesterday morning to 58° this evening as warm air streamed in.

16 - Overnight the temperature plummeted from 62° at 11 PM to 37° by daybreak.  After a raw and gray day an inch of snow fell during the evening, the first measurable snowfall of the season. 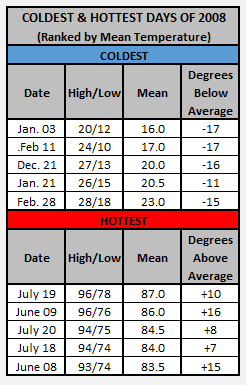