15 - After a light snowfall during the AM (one inch fell), the afternoon was clear and quite cold, with a high temperature of only 22°.  These were the conditions that met US Airways Flight 1549 when it made its famous "miracle" landing on the Hudson River in the middle of the afternoon.

16 - With a high/low of 16°/9°, today was the coldest day of the winter, nineteen degrees below average.  This was also the coldest winter day in five years.

2 - 8.3" of snow fell from a quick-moving storm that moved in last night (when 1.8" fell), making it the largest accumulation of the winter - and the most in three years.  12-15" fell out on Long Island.  This was the last snow of the winter.

3 - Following yesterday's snowstorm, this morning dawned very cold with a low of 12° degrees.  And today's afternoon high of 26° was a record for coldest high temperature for the date.

25 - What a spectacular start to my weekend summer share out at Fire Island as the afternoon high soared to 88° (in New York) after a low of 52°.

26 - Today's high reached 92°, a record for the date and twenty-seven degrees above average.  It came just three days after a cool high of 57°.  It would be nearly four months before it got this hot again.  This was the second day of a four-day springtime heat wave that saw high temperatures of 88°-92°-84°-90°.  (The typical high in late April is in the mid-60s.)

29 - One day after the high reached 90° today's temperature fell steadily throughout the day and was in the 50s by afternoon.

2 - The 0.11" of rain that fell between 3-5 AM made this the sixth year out of the past seven in which some rain fell on this date (and in nine out of the past twelve years).

5 - Gray and drizzly conditions persisted for a fifth day in a row, keeping the temperature from rising very much; the high was 54° (fourteen degrees below average) after a morning low of 51°.

4 - Rain that began late last night continued until daybreak today, amounting to 0.87" (0.54" fell this morning).  This was the fifth year in a row that rain fell on this date.

18 - 2.30" of rain fell today, a record for the date.  Rain fell until 4:30 PM, preventing the afternoon temperature from getting no higher than 64°, sixteen degrees below average.  Today's rain brought the month's total to 7.61", making this the rainiest month since April 2007.

23 - This morning's low of 66° was nothing remarkable except for the fact that it was the warmest low temperature of the month, making it the coolest maximum low temperature (got that?) in the period 1979-2019.  1979 was the only other year in the period that didn't have a low of 70° or warmer in June.

4 - In the sixteen days between June 19 and today morning lows fell in the narrow range of 63° to 66°, two degrees cooler than average.

15 - For the fifteenth day in a row temperatures were below average in what became one of the coolest Julys on record (only two days had above-average readings).  During this fifteen-day period temperatures averaged five degrees below average.  Eleven of the days had highs in the 70s.

17 - The afternoon high of 86° was the warmest reading of the month, the coolest July maximum temperature on record.

18 - A quick-moving, but severe, thunderstorm struck shortly before 10 PM and produced a micro-burst that downed more than 500 trees in Central Park and Riverside Park between West 90th and 106th Streets - the most destructive storm in the history of these storied parks.  0.64" fell during the short lived storm.  Besides the violent wind and rain the storm was noteworthy for its vivid lightning and booming thunder.

21 - As a cool summer wound down, today was the seventh day in a row with a high temperature of 88° or higher.

11 - A coastal storm that somewhat resembled a tropical storm buffeted the area with wind gusts of 30-45 mph and 0.84" of rain.

1 - Today's high was a chilly 55°, more typical of the second week of November, and the chilliest high on the first day of October in the years since 1960.

2 - Although the showers that moved through after 11 PM produced just 0.06" of rain, it was the first rain on this date in 13 years.

15 - Today was raw, windy, rainy and unseasonably cold (high of 48°/low of 37°).  Outlying suburbs of New Jersey picked up one to two inches of snow.  This came in the midst of a nine-day stretch (10/12-19) in which temperatures were 11 degrees below the norm for mid-October.

28 - 1.29" of rain fell thru mid-afternoon, making this the third year of the past four to receive more than an inch of rain on this date.

31 - It was a very mild day (high of 71°) but light rain began falling just as the Greenwich Village Halloween parade was getting underway.  Although just 0.17" fell over five hours this was the first rain to fall on Halloween night in 14 years.

6 - Sunny and brisk, a perfect day for the Yankees victory parade in lower Manhattan to honor the team upon winning their 27th World Series title a few days earlier over the Philadelphia Phillies.  The high/low of 50°/37° was six degrees chillier than average.

8 - Today's high of 69° was the mildest reading of the month, rebounding from the month's chilliest reading (35°)  the day before.

13 - Light showers after 9 PM amounted to 0.04", making this the seventh time in eight years that rain fell on this date.

11 - Windy and quite cold.  Today's high of 29° was the first high temperature below freezing this winter.

13 - Today's rainfall of 0.95" brought the year's total precipitation over fifty inches for an unprecedented seventh year in a row.

19-20 - A snowstorm moved in late in the afternoon and by the time it ended at around 4 AM on Sunday 10.9" had fallen.  This was the first snowfall of the winter.  Long Island received considerably more, with parts of Suffolk County buried by more than 20".  There was still plenty of snow on the ground when Christmas arrived.

This precipitation also brought the year's total precipitation to 53.62", which was 0.01" more than last year - the closest any two consecutive years have been to each other.  This passed the 0.03" difference between 1945 and 1944. 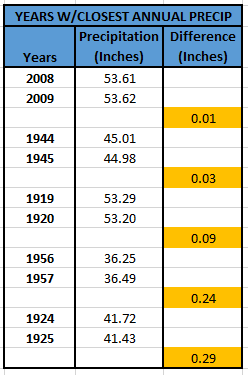 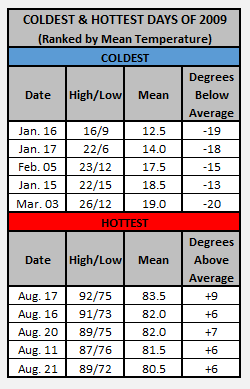