7 - Woke up to five inches of fresh snow that fell overnight.  This amounted to almost all of the month's 0.58" in total precipitation - the driest January on record (and the exact amount that fell in December!)

12 - Today's high/low of 15°/+2° made this the coldest day of the winter, 24 degrees colder than average.  Because of consistently very cold temperatures since the last week of December, ice formed on the the East and Hudson Rivers and extended all the way south to Manhattan.

18 - Today was the 20th day in a row with colder than average temperatures - and the 11th in a row with a high of 32° or colder.  The average high/low during this period was 28°/16°, eleven degrees below normal.  Since Dec. 14 two-thirds of the days since had high temperatures at freezing or lower.

18 - Today's balmy high of 68° was a record for the date, 26 degrees above the average.  This was four weeks after the Hudson and East Rivers around Manhattan were largely ice covered.

22 - This was the seventh day in a row in which the mean temperature was at least 12 degrees above average.  The high/low during these days was 58°/45°, seventeen degrees milder than normal.  This streak came in the midst of 17 days of above-average temperatures (Feb. 14 - March 2).

28 - After an extremely dry December and January, February was the wettest since 1939.  (Interestingly, December and January each received the same meager amount of precipitation - 0.58").  Nearly four inches of rain fell in the past week-and-a-half, more than the previous thirteen weeks combined.  (6.04" fell in total.)

9 - Today was a delightful day for the Yankees home opener as the afternoon temperature topped out at 75°, seventeen degrees above average.

19 - Although the temperature was 11 degrees cooler than yesterday, it was still a beautiful Easter Sunday as the high reached 68° (six above average) under partly cloudy skies.

21 - A late cold snap dropped the morning low to 33°, a year after a low of 32° was reported on April 17.  Interestingly, the warmest temperature this month, 81°, came at the beginning of April.  This morning's frosty low was the coldest reading since March 21.

16 - Today's high soared to 93°, the first 90-degree day of the year.  This was the latest date for the summer's first 90 since 1963, when it occurred on June 24.  (The average date is May 31.)  Besides the heat there was unbearable humidity to contend with as the dew point in the early afternoon reached 80°, producing a heat index of 109°.  In the years since 1950 this dew point is the highest on record for Central Park.

4 - This was the rainiest 4th of July on record.  Rain began at around 11 AM and continued for much of the day, totaling 1.76".  (Interestingly, no rain fell during prime fireworks time.)   Rain fell on each of the first five days of the month and amounted to nearly three inches, practically the month's entire rainfall.

14 - This was the fourth day in a row with a chilly morning low of 43° - eight degrees colder than average.

26 - Between Nov. 20 and today each day's low temperature was colder than the day before, dropping from 50° on  Nov. 19 (ten above average) to 29° today (nine below average).  Today's reading was also the coldest of the month.

14 - The winter's first one-inch snowfall arrived in the late afternoon, but after 1.4" accumulated the snow changed to a steady rain as the temperature rose to 37° by midnight.  In total 1.02" of precipitation fell. 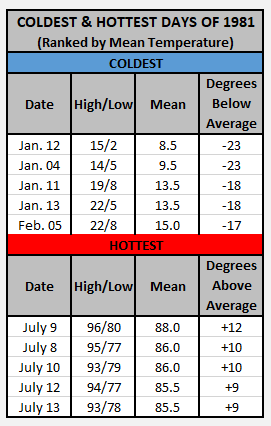