3 - Today's high of 64°, twenty-five degrees above average, eclipsed the previous record high set three years ago.  This was the second of three days in a row with readings in the 60s.

13 - After a very mild first half of the month, in which temperatures averaged twelve degrees above average, Arctic air swooped in and the second half of January would be very cold, with temperatures eight degrees below average (high/low of 29°/15°).

20 - A very late first snowfall of the winter, as 2.5" fell.  This was two years after the winter of 1998's first snowfall fell on Jan. 18.  Today was also the 20th day in a row in which no low temperature was duplicated.

25 - The largest snowfall of the winter, 5.5", caught forecasters by surprise.  The accumulation was held down when sleet and freezing rain mixed in.  The same storm buried Raleigh, NC with 20.3" of snow, the largest snowfall in its history.

18 - A slushy three inches of snow fell, in addition to freezing rain and sleet.  This was the last significant snow of the winter.

10 - This was the 19th day in a row with above-average temperatures.  During these days the average high/low was 55°/39°, nearly 10 degrees above average.  Not only was it mild but dry as well, with just 0.29" of precipitation.

9 - One day after the high temperature reached 71°, 1.2" of snow fell during the morning - the final snow of the winter.  The day's low of 30° was the coldest reading of the the month.

12 - At this afternoon's home opener for the Yankees, the team received their World Series rings in weather that was sunny and breezy, with a chilly high of 50°, nine degrees colder than average.  This kept the attendance (48,487) down from the usual sell-out.

21 - My flight to Pittsburgh, for an Easter visit to see my mother, was delayed six hours due to inclement weather in the Mid-Atlantic states.  1.62" of rain fell, with more than half of it coming down between noon-3 PM.  It was also chilly as the high got up to just 49°, fourteen degrees below average.

7 - Today's high of 93°, a record for the date, was the hottest reading of the entire year, and more than three weeks earlier than the typical date of the first 90.  It was the first of just seven highs in the 90s in 2000, well below the average of eighteen.

9 - Today's high was 91°, the third day in a row of 90-degree temperatures.  It was the longest such streak of the year.  There would be only four more 90-degree days for the rest of the year.

10 - After three days in a row with 90-degree highs (and five of 85°+), today saw a return to reality as temperatures fell from 78° shortly after midnight into the mid-50s during the afternoon.  And then rain moved in during the evening, lasting until about 9 PM; 0.56" fell.

20 - Today's rainy and raw conditions made the five-day heat wave of May 5-9 a distant memory.  Today's high was just 51°, twenty-one degrees colder than average.  By contrast, the high on May 9 was 93°, twenty-four degrees above average.

7 - The morning's low was a chilly 49°, twelve degrees below normal, and the last time the temperature fell into the 40s in June.

11 - Today's high of 92° was the sixth 90-degree day so far this year.  However, there would be just one more such day for the rest of the summer, two months later on Aug. 9.  Only six other years have had their sixth 90-degree reading by this date (none since 2000) - but all of them had a lot more hot days in the following months.

12 - The temperature this afternoon fell into the low 60s, quite a contrast from yesterday's sizzling high of 92°.  And tomorrow's high would manage to rise to just 60°, eighteen degrees cooler than average.

18 - Although today was just one degree above-average (high/low of 87°/69°) it was the only day with an above average reading in the twenty-two days between July 11 and Aug. 1.

30 - The 0.23" of rain that fell today (mostly during a shower in the pre-dawn hours) was the last time rain fell on this date.

31 - One year after the hottest July on record, this July was the coolest since 1914, four degrees below average.

1 - Today was the tenth day in a row in which the high temperature failed to reach 80°.  During these days the average high was only 74°, eleven degrees cooler than average, and more typical of late May.

6 - Twenty-nine of the past thirty-two days had cooler than average temperatures.  Twenty days had highs lower than 80° during a time of year when highs are typically in the mid-80s.

9 - Today's high of 90° was the first 90-degree temperature since June 11.  It was also the last day in the 90s this year.  At the time this was the third greatest gap between the last and the next-to-last day in the 90s (now the fourth greatest).   In total, only seven days were in the 90s, well below the average, which is eighteen.

30 - Today's rain amounted to just 0.01", but it was the first to fall on this date in fifteen years.  This was also the seventh day in a row in which the mean temperature was one degree above or below average, tying a streak of similar length three years earlier (the longest such streaks in the 1980-2020 period.)

2-4 - Each day of the extended Labor Day holiday had above average temperatures as well as a thunderstorm.  In total, the storms produced nearly two inches of rain.  In the 1979-2019 measurement period, this was the only Labor Day weekend to have rain fall on each day.

5 - After a Labor Day weekend in which every day saw highs between 82° and 84°, Tuesday dawned brisk and quite chilly with a low of only 52° (one degree shy of the 1963 record).  This was 30 degrees colder than yesterday's noontime temperature.

25 - Today was the sixth day in a row with a low of freezing or colder, the longest such streak in November in the years since 1940 (later equaled in November 2008).

6 - Today was the first day of the winter with a high temperature of 32° or colder.  The high of 32° was 14 degrees below average and was the first of thirteen freezing-or-below days in December (the average is four).

17 - Today's high of 62° was a record for the date, just one of five days with above-average temperatures during a December that was quite cold (5.5 degrees below average) - the coldest since 1989.

22 - Today was the first of thirteen days in a row with high temperatures of 32° or colder - one of New York's longest cold streaks on record.  During mid-afternoon a quick burst of snow amounted to 0.8".

30 - A foot of snow fell today.  It was a record for the date, the most snow since the blizzard of January '96, and the biggest December snowstorm since 1960.  The snow came down in just an 8-hour period, between 5 AM-1 PM. 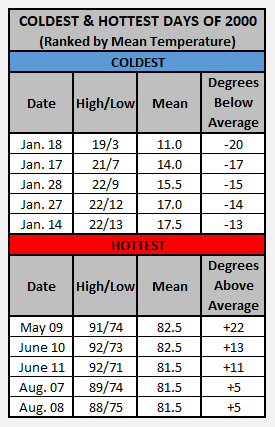 Tags: weather in New York during the year 2000