11-12 - New York was the bulls-eye for a record-setting amount of snow over the weekend.  Beginning the night of the 11th with light snow (2.8" fell by midnight), it turned heavier after midnight and between 4-10AM Sunday morning the snow was falling at a rate of two inches/hour (between 8:25-9:25 nearly four inches piled up).  When it was over 26.9" had fallen, 1.1" more than the City's previous record on Dec. 26-27, 1947.  Snowfall totals outside of NYC were also impressive but not nearly as much as what Central Park picked up.  This storm accounted for two-thirds of the winter's total snowfall.  Only 1.3" of snow fell for the rest of the winter.  (This storm dropped to second biggest snowstorm ten years later when 27.5" fell on Jan. 23, 2016.)

18 - Although today turned sharply colder, temperatures in the upper 50s the previous three days completely melted away the record-setting twenty-seven inches of snow that fell less than a week ago.

19 - Today was the second coldest day of a mild winter as the high reached 30° after a low of 15°.  (The coldest day of the winter was back in mid-December).

10 - Today's high of 74° was a record for the date, a jump of twenty-seven degrees from the morning low.  It would be the mildest reading of the month.

26 - A light shower during mid-afternoon measured 0.02" and was the last precipitation of the month, which ended up being the driest March on record.  Its total of 0.80" was 0.10" less than the previous record from 1885.

5 - The 0.1" of snow that fell today brought the season's total to exactly 40 inches, making this the unprecedented fourth winter in a row with snowfall of 40 inches or more.

11 - With a temperature of 68° at game time, this was the mildest Yankee home opener in eleven years.

20 - Today's high of 83° was the warmest reading of the month (and came five days after the year's first 80-degree reading), but what was even more notable was the afternoon's bone dry humidity, which fell to 10% at 4 PM.  Air this dry in New York is rare.  However, ten years later on this date the humidity dropped to 9%.  (Typical late afternoon humidity in April is around 45%.)

22 - My summer share at Fire Island was supposed to begin this weekend but I didn't go out because a whole lot of rain fell over the course of two days, 1.23" today (a Friday) and 2.34" tomorrow.  This was the most rain from one storm in six months.  It was also very chilly as the high only reached 47°, sixteen degrees below average.  This was the second year in a row in which opening weekend was a washout.

27-29 - Summer-like conditions prevailed throughout the Memorial Day weekend with afternoon highs of 83°-83°-88°, eleven degrees above average.  This was the first time in six years that the temperature on Memorial Day was in the 80s.

18 - A hot and humid afternoon (high of 95°) was followed tonight by a severe thunderstorm between 9-10 PM that dumped 0.69" of rain.  These storms maintained their strength as they moved eastward and lashed Fire Island where high winds snapped the flagpole in the harbor of Fire Island Pines.  Deck furniture, table umbrellas and even a few grills were blown into swimming pools there.

2 - A high of 97°/low of 83° made this the hottest day of the summer.  It was 14 degrees above average.  Like yesterday the heat index in the afternoon peaked at 106°. The morning low was the warmest ever in August.

3 - The high today was 96° after a low of 78°.  This was the fourth day in a row of 90-degree weather and it turned out to be the last 90-degree reading of the summer - one of the earliest dates for the last 90 of any New York summer (about four weeks ahead of schedule).  In total, eight days were in the 90s this summer, ten below the typical number.  (Seven of them occurred after 7/15).

8 - This was the fifteenth day in a row in which the morning low was in the 70s.  The average low during these days was 75°, six degrees above average.  The warmest low during this period was 83° on Aug. 2.  This was the longest such streak in eleven years.

30 - Rain fell for the seventh day in a row.  During this streak 3.32" fell; the high during these seven days was 74°, eight degrees cooler than average.

2 - Labor Day weekend started off cool and wet as tropical storm Ernesto moved through, dropping 1.24" of rain; the day's high was just 66°, thirteen degrees below average.  Sunday and Monday, however, were very nice, but a bit cooler than average (mid-70s).

4 - After a very mild day (high 78°/low 64­) a cold front passed through after dark and generated a thunderstorm that drenched the City with 0.41" of rain between 11 PM-midnight.

30 - It was somewhat ironic that the last day of November was the mildest day of the month (oddly, tied with 11/1)  as today's high of 69°/low of 58° was more typical for early October - and 21 degrees above average.

8 - During one of the mildest Decembers on record (6.3 degrees above average, today was an anomaly as it was 15 degrees colder than average, with a high of 29°/low of 18°.  This was the earliest date for a low below 20° since the brutally cold December of 1989.

9 - This morning's low was 24°, making this the sixth consecutive day with a below-freezing low temperature - and it would be the last such low temperature this month.  As a result, this December tied that of 1984 for the fewest number of days in December with minimum temperatures of freezing or colder.  (However, this record would be shattered nine years later when December had no days with lows colder than 32°.)  The next low below 32° wouldn't occur until Jan. 9.

31 - The year ended with twenty-one days in a row of above normal temperatures, averaging 12 degrees milder than is typical.  During these days there was no temperature of freezing or colder reported.  Additionally, this was just the second December to have neither measurable snow or a trace of it. 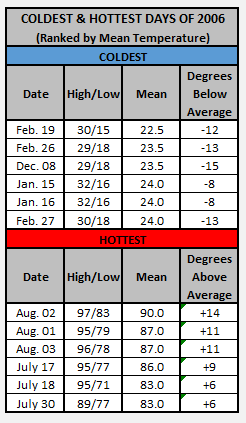 Posted in By Year | Permalink | Comments (3)

Do you remember what the show was?