A Look Back at New York Weather: May 4

Today had the season's last reading in the 40s (the low of 48° was seasonable for the date) - the earliest date on record for this occurrence (which still stands).  In the 19th century, the average date of this occurrence was 5/28 (in the 21st century, the date is ten days earlier).

The 0.11" of rain that fell in the morning hours was the first measurable rain on this date in 14 years.

This was the third day in a row of 90-degree heat and the fourth day in a row with a record high.  This somewhat mirrored an early-May hot spell the previous year between May 5-9. 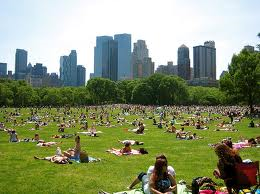 Today was the fourteenth day in a row with below-average temperatures (five degrees below average).  This was in stark contrast to mid-April's heat wave in which seven days had temperatures that averaged 23 degrees above normal.

Today's low of 72° was a record-warm reading for the date (twenty-two degrees above average - and four degrees above the day's average high).  Today was the fourth day in a row with highs of 80° or warmer (today's was 84°), the longest such streak since one of seven days in late September 2017.

Today's slightly above average high of 71° came one year after a low of 72° on the same date.