This was the sixteenth day of the past eighteen to have measurable rain.  Nearly seven inches fell during this period, and it came after a fifteen-day stretch with no rain.  During these wet days there was also an eight-day streak (6/13-20) in which highs were only in the 60s (as opposed to typical highs in the upper 70s).

After a sweltering high of 93°, a cold front produced a thunderstorm at around 5 PM that had tragic consequences.  Although it produced just 0.18" of rain, the storm created a tremendous wind shear that caused Eastern Airlines Flight 66 to crash as it was approaching Kennedy Airport, killing all but eleven of its 124 crew and passengers. 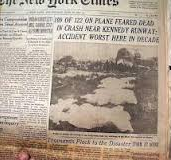 Rain began falling lightly at around 6 PM and became heavier as the night went on.  By midnight, 1.49" had fallen, a record for the date.  In the rain's last hour, between 11PM-midnight, 0.50" was measured (in reality, this rain fell between midnight-1 AM on 6/25, but the National Weather Service doesn't recognize Daylight Saving Time and uses Standard Time year-round for its observations).

During a torrential downpour between 11:30-midnight, 0.70" of rain was measured.  (In reality, this rain fell between 12:30-1:00 AM on 6/25, but as mentioned above, the National Weather Service doesn't recognize Daylight Saving Time and uses Standard Time year-round for its observations)

Today, with a high of 93°, was the first 90-degree reading of the year, coming nearly a month after the typical date of the first 90.  It was also the first day of a four-day heat wave.

This was the third day since June 17 to have more than an inch of rain fall during storms that lasted approximately two hours.  However, each storm came at a different time of day.  Today's, which produced 1.11", came at daybreak; the storm on 6/19 moved through at the beginning of the evening rush hour (1.28" fell); and the storm on the 17th (which dumped 1.39") was during lunchtime/early afternoon.  Additionally, today's high of 84° followed four days in a row that had highs of 83°.

More to the point is the fact that it was the high this year and the previous two.