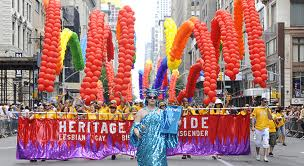 A week of Gay Pride events culminates with the annual Gay Pride Parade on the last Sunday of June (roughly coinciding with the date of 1969's Stonewall Riot).  Since the first parade was held in 1970 the temperature has been in the 90s eight times (the last two times were in 2020 and 2021).  Three years had highs in the 60s (1972, 1979 and 1996).  And chances are very good that the festivities will be rain-free as measurable rain has fallen just nine times in the past fifty years (2019 and 2020 were two of these years).

Whereas the Stonewall riots began on a stifling hot day (the afternoon high that Saturday was a record 96°), the weather today for the first Gay Pride parade was refreshingly mild.  After a cool morning low of 57° (the chilliest reading of any Gay Pride Day, later tied in 2007) the high reached 80°.  And skies were clear.

Conditions were very summer-like, with a high of 89°, eight degrees warmer than average.  And like last year, skies were clear.

It was a cool and damp Gay Pride Day, courtesy of the remnants of hurricane Agnes.  Close to an inch of rain fell during the morning, and under gray skies the afternoon high managed to reach only 66°, fifteen degrees below average.  In later years Gay Pride Day 1979 would be cooler (high of 65°), 1984's wetter (1.46").

The afternoon high of 79° was perfect for marching.  Skies were a mix of sun and clouds.

Rain held off until after 8 PM, when 0.26" fell thru 1 AM from thundershowers.   Before that, the afternoon was sunny as the temperature rose to a pleasant 83°.

Rain moved in mid-afternoon and 0.15" fell between 4-6 PM, as the parade was winding down.  It was on the humid side (dew point in the upper 60s), with seasonably warm temperatures.

Under clear skies, this was the first Gay Pride Day in which the mercury rose to 90°.  There have since been seven other parades held in 90-degree weather (including 2020 and 2021).

Today's high of 82° was at the seasonal average.

This was the chilliest Gay Pride Day on record, as the afternoon high was only 65°, sixteen degrees below average, and more typical of late April.  (However, later in the evening things heated up at Madison Square Garden where The Village People performed in concert.)

The afternoon high of 77° was six degrees cooler than average, but it was on the humid side.  Heavy rain moved in (0.70" was measured), but not until after 11 PM, the first rain since June 10.

It was a beautiful summer day, with a high of 85°, clear skies, and comfortable levels of  humidity.  Rather than go to the parade, I went to the beach instead.

Hazy sunshine and close to seasonable temperatures.  Rather than watch the parade, I helped my boyfriend at the booth he had at the Christopher St. festival.  (He made clips attached to raccoon and chinchilla tails.)

Under sunny skies, the high reached a seasonably warm 82° (the following day's high soared to 95°).  This was the first, and only, time I marched in the parade.  (And the day before, I ran in the Gay Pride Run in Central Park for the first time.)

Clouds moved in early in the afternoon, but rain held off until around 4:00.  Then it came down heavily after 9:00, and by midnight 1.46" had fallen - a record for the date.  This was also the rainiest Gay Pride Day.

Very nice weather, with a cooler than average high of 79°.  I watched the parade from the 18th floor terrace of a friend's apartment on lower Fifth Avenue.

Wicked humidity in the morning gave way to drier conditions during the afternoon, along with bright sunshine and a refreshing breeze, so the high of 89° was bearable.  I watched the parade for three hours on Fifth Ave. between 12th and 13th Streets.

Pleasant, September-like conditions under mostly sunny skies, with a high/low of 77°/61°, which was five degrees cooler than average.  The day before, I didn't participate in the Gay Pride Run held in the morning because of rain, which amounted to 0.79".

Showers fell between 4 AM and noon (0.34" was measured), ending as the parade was getting underway.  Under mostly overcast skies, the afternoon high reached 82°.

Partly cloudy skies and mild temperatures, with a high/low of 80°/68°.  I watched the parade on 5th Avenue between 15th and 16th Streets.

Today's high of 90° was bearable after yesterday's 97°.  A brief downpour occurred in the afternoon, at 4:30, and the temperature dropped into the 60s by evening.

A delightful day for a parade as skies were crystal clear, and the temperature rose into the mid-80s.  For a change, I watched the parade in Midtown at 45th Street.

After a pre-dawn thunderstorm, skies cleared by 1 PM and the high reached 86°.  This was the day after the high was 92°.  I watched the parade for about an hour on Waverly Place, then walked over to the Hudson River for the festival.

Perfect summer weather marked the 25th anniversary of the Stonewall Riot.  Under sunny skies the high reached 89°, the fourth year in a row the temperature rose above 85°.  Unlike other years, this year's parade took place on First Avenue near the UN and marched up and over to Central Park.  This year's festivities coincided with the conclusion yesterday of the Gay Games which New York hosted.

After four overcast days, skies cleared in the afternoon, but oppressive humidity persisted.  Light rain that began last night ended by daybreak today.  The high was 80°.

Rain fell throughout the morning and continued through early afternoon.  Then after a  three-hour break, showers returned after 7:00.  In total, 0.88" of rain fell.  The high temperature was only 67°, fifteen degrees cooler than average.

Clear and hot, with a high of 90°.  Happily, the humidity was bearable.

Partly cloudy and pleasant with a high/low of 78°/63°, four degrees below average.

The high reached 90° after a very warm morning low of 75° (the warmest low of any Gay Pride Sunday).  Afternoon dew points were in the uncomfortable 68°-72° range, producing a sweltering heat index of 96°.

Under clear skies the high reached 86°.  Low humidity (33%) made for comfortable parade marching and watching.

A lot of rain fell yesterday morning/afternoon (1.64") but today was dry under partly cloudy skies.  It was on the cool side, which was perfect for watching the parade.  The high of 75° was six degrees below average.

Sunny thru mid-afternoon, with a sultry high of 87°.  I watched the parade from Washington Square Park and later walked over to the Pride festival on Greenwich St.

After a brief shower at sunrise, the rest of the day was sunny through some haze.  Temperatures were seasonably warm, and it was somewhat humid.

Fair skies, with temperatures a bit cooler than average (high/low of 77°/60°).

Today's high was a sizzling 92°, eleven degrees above average, making this the hottest (temperature-wise) Gay Pride Day; the heat index reached 96°.  (June 26 is also the day in June most likely to reach 90°.)

Although a shower moved through at around 12:30 PM, shortly after the parade  began, heavy rain that had been predicted stayed to the south (five to ten inches flooded eastern PA, MD and DC).  However, skies were mostly overcast.  After a warm and muggy morning low of 70°, the high was only four degrees warmer (and eight degrees below average).

This was the fourth day in a row of fine weather.  The day started off chilly, with a low of 57° (tying 1970's Gay Pride Day for coolest reading experienced), but the afternoon high rebounded to a pleasantly warm 81°.

The day started gray, but by the time the parade began skies were sunny and the temperature was in the seasonable low 80s.

Unbearably humid conditions made the afternoon high of 91° feel like 96°.  I watched the parade on 5th Avenue between 18th and 19th Streets.  Fortunately, I was on the shady side of the street. 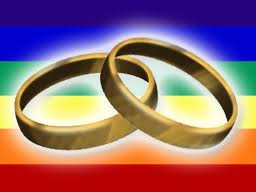 Delightful conditions prevailed, with temperatures in the mid-80s under partly skies.  Later in the afternoon skies became overcast - but there was no rain until close to midnight. 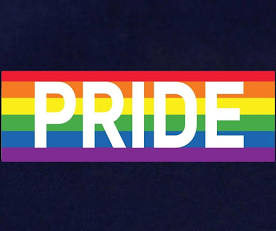 It was sunny, warm (high of 86°) and uncomfortably humid through early afternoon (dew point in the low 70s), then threatening clouds moved in.  It appeared severe weather was about to be unleashed, but there were just some sprinkles.

Clear skies, low humidity, and temperatures in the mid-80s.

Mostly overcast skies and below average temperatures belied the high spirits of parade-goers in the aftermath of the Supreme Court's ruling two days earlier legalizing same-sex marriage nationwide.  Overnight rain was over by daybreak but overcast skies persisted.  The day's high/low of 73°/61° made this the coolest Gay Pride Day since 1996 (when the high was only 67°).

Today's conditions were similar to those of two years ago, with mostly clear skies and a high of 87°.

After three days with an inch or more of rain in the week leading up to today's celebration, today was partly cloudy with seasonable temperatures (high/low of 83°/68°).

This year's conditions were similar to last year's, with a high/low of 84°/66° under partly cloudy skies (this was a big warm up from yesterday, which had temperatures stuck in the 60s).  The one difference was that this year's marchers had to contend with humid conditions, with the afternoon dew point peaking at 70° late in the afternoon.  However, despite the high humidity, this was the tenth year in a row in which no measurable rain fell during the parade. 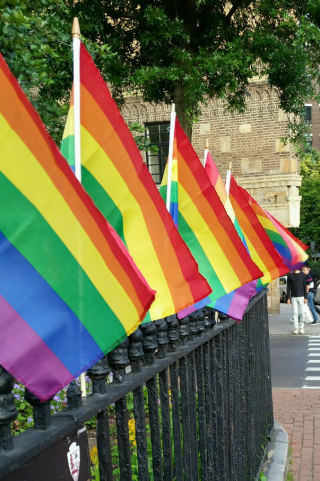 Conditions were very nice through early afternoon, with the temperature rising into the low 80s under partly cloudy skies, but then a quick shower interrupted the parade mid-afternoon.  And although it lasted for only 15-20 minutes the 0.06" that fell was the first measurable rain during the parade in 11 years (heavier amounts fell over Long Island).  This shower was also accompanied by winds that gusted to 37 mph at Central Park.

Although the parade was cancelled due to COVID-19 restrictions, there were unofficial gatherings and protests throughout the City.  For the first time in ten years, the temperature reached 90°.  And like last year, a thunderstorm dampened celebrations, but this year it occurred in the early evening while last year's was during mid-afternoon. 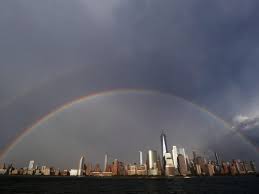 For the second year in a row (a first), the high reached 90°.  And with an afternoon dew point in the 70°-71° range, the heat index reached 96°.  Skies were a mix of sun and clouds, which cleared as evening approached. It was a sunny, hot day with a high/low of 89°/74°.  The low and mean temperature were the warmest of June, while the high was the second hottest of the month, one degree below the day before.  The last time the low on the day of the Gay Pride Parade was as warm as this year's was in 2005  (the warmest low on Gay Pride Sunday is 75° in 1999).