Today's high of 92° was the second reading in the 90s this year, coming nearly three months after the year's first, on 4/20.  The next two days would also have highs of 92°.

Heavy rain between 6 AM and 12-noon amounted to 3.16", a record amount for the date (a greater amount than what fell from Agnes three weeks ago).  The storm came in the early days of a two-week hot spell, but the clouds kept today's temperature in the mid-70s, the only day in this period not to have a high of 88° or hotter.

Today was the start of a nine-day heat wave.  It was also the day that New York's infamous blackout occurred, starting in the evening.  Discussions about the blackout mention the heat, but today, which had a high of 93°, was one of the "cooler" days of the heat wave.  (This heat wave is the hottest of any heat wave of seven days or longer, with an average high of 97.1°.) Today's high was 93°, the seventh day in a row with a high in the nineties.  With highs ranging between 93° and 96° during this week-long period, the average high was 94°.

This was the third year in a row in which the temperature was in the 90s on this date.  This year the high reached 93°.

Today had a high of 92°, the fourth year in a row the high rose into the nineties on this date.

Rain and wind from tropical storm Bertha moved in late on July 12 and continued until mid-afternoon today.  About two inches of rain fell and was accompanied by winds of 30-45 mph.  Western New Jersey and the lower Hudson valley had the heaviest rain, picking up between three and seven inches. 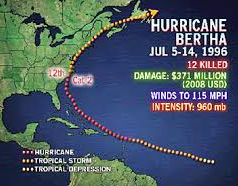 After getting soaked by six inches of rain in the past five days, today was rain free, but gray skies/low clouds predominated, and the air was thick with humidity.  This combination kept the temperature from rising much, as the high of 72° was just three degrees warmer than the low.  But despite afternoon temperatures that were 13 degrees below average, the air wasn't refreshingly cool since daytime humidity was in the 85%-90% range.

I wasn't living here at the time, my only blackout experience was the one in August '03. Although the weather for that one was hot (90), it wasn't nearly as as hot as it was back in '77. The one night I experienced without AC was miserable, so I can't imagine what it was like in '77. I think about blackouts whenever we're in the midst of a heat wave.

I believe a major heat wave followed after the blackout temps over a hundred for
4 days then very winter a brutal winter..awesome year...well I've read as I was quite
Young and couldn't tell you any personal accounts..

The blackout in 1977 was the result of several lightning strikes blowing out the transmission lines at the substations along the Hudson River. Thunderstorms were all around the area that evening but none hit New York City directly.