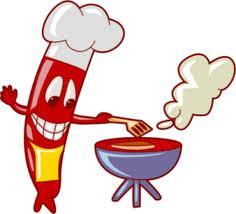 Along with hot dogs and fireworks, July 4th is also equated with hot weather, and since 1970 the temperature has risen into the nineties ten times, or about once every five years (most recently in 2019).  Back-to-back years with 90-degree readings on the holiday have occurred three times, the most recent being in 2002 and 2003.  And there was a three-year streak in 1898-1900.  1949 is the only year to see a high in triple digits.  Rain has fallen about once every three years (again, since 1970), but just two of those years, 1978 and 1981, were washouts.  In 2014 the weather was somewhat affected by Hurricane Arthur.

Today's high was 91°, and was the third year in a row with a high in the 90s - the longest such streak on the holiday.

This was the fourth year in a row with highs in the 70s on the holiday - the longest such stretch of below-80 readings.

The 1940s started with July 4th's coolest high temperature, and ended with the hottest as today's high soared to 102°.

Showers moved in during the early evening and put a damper on fireworks exhibitions as 0.18" fell between 8-10 PM.  Then the skies really opened up between 11 and midnight, with an additional 0.90" pouring down (actually, this rainstorm occurred between midnight and 1AM on 7/5, but the National Weather Service uses Standard Time year-round and doesn't recognize Daylight Saving Time).

Today was the hottest day of the year, with a high/low of 95°/78° under sunny skies.  And although three other days this summer had highs of 95°, today's low was the warmest, giving this day the highest mean temperature.

New York's Bicentennial celebration (which included the parade of 'Tall Ships' in New York Harbor) took place under partly skies, with temperatures a bit cooler than average (high of 82°/low of 63°).  A brief thunderstorm put a slight damper on festivities during mid-afternoon, but it produced very little rainfall (0.01"). 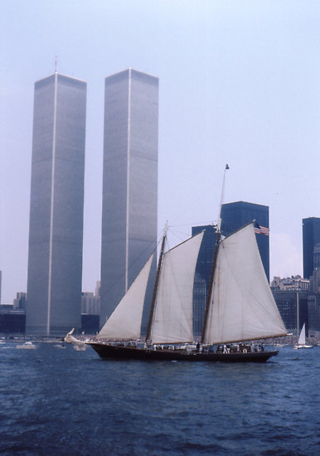 It was a truly miserable holiday as rain fell all morning (totaling 1.19").  Because of clouds and a northeasterly breeze, the high temperature reached only 62° - twenty-two degrees cooler than average.

This was the rainiest 4th of July on record.  Rain began at around noon and continued for much of the day, totaling 1.76".  (But no rain fell during prime fireworks time.)  The first four days of the month had rain, which amounted to nearly three inches.  After this rainy stretch, the next two weeks would be hot and dry, with ten days in the 90s.

After a sultry morning low of 78°, today's high soared to 95°.  On this broiling hot afternoon, Yankees pitcher Dave Righetti pitched a no-hitter against the arch-rival Red Sox at Yankee Stadium. 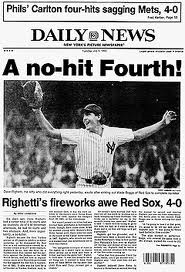 Although hot weather and July 4th seem synonymous, the day began at a chilly 55°, twelve degrees below average and the coolest 4th of July reading on record.  (Two days later the high would reach 98°.)

Just two days after a cool high of 69°, today's high reached 95°, the first of twenty 90-degree days in July.  Despite the heat I spent the evening in Central Park with my brother and his family to listen to the New York Philharmonic's 4th of July concert. 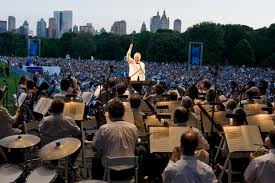 With a high of 96°, this was the hottest 4th of July in 33 years.  Not only was it hot, but unbearably humid as the dew point in the afternoon was in the low 70s, which produced a heat index of 110°.  Today was the first of eighteen 90-degree days in July (eleven of which were 95°+).

In the sixteen days between June 19 and today, morning lows fell in the narrow range of 63° to 66°, two degrees cooler than average.

Mostly sunny, hot, and oh-so-humid.  The high temperature reached 92° but it felt like 98°.  Thunderstorms were all around NYC in the evening, but none hit Manhattan.

Skies were gray, and light showers fell through mid-afternoon, the result of New York being on the northwestern fringe of Hurricane Arthur's rain shield.  It was also on the windy side.  However, by late afternoon the sun began breaking through and skies were mostly clear by the time Macy's fireworks exhibition went off.  Although the amount of rain was light, just 0.14", it was the most rain to fall on the 4th of July in six years.  And the high of 74° was the coolest in seven years (and 12 degrees cooler than this year's Memorial Day).

Skies were overcast through mid-afternoon (including some light rain from 1:30-2:30), but then the sun broke through and the rest of the day was very pleasant, but the high only reached 75°.  This was the second year in a row in which the weather on Memorial Day was much nicer.

It was seasonably warm, and skies were partly cloudy until after 5:00 when clouds moved in, then light showers began around 8:00.  However, despite the rain, Macy's fireworks extravaganza went on as planned as steadier rain held off until after 10:00 when close to an inch fell through 4:00 AM on 7/5.   (The 0.49" that fell before midnight was the most to fall on 7/4 since 1981.) Today's high reached 90°, the first time in the 90s on 7/4 in seven years.  Skies were mostly clear, but the heat wasn't stifling as humidity levels were bearable during the afternoon hours.

This morning’s refreshing low of 60° (shortly after midnight) was the coolest on the holiday since 1992 (when it was also 60°).  Only ten other 4th of Julys have had a cooler low.  (In the years since 2000 the average low had been 70°.)  The high of 79° was the coolest in six years, but after last week's four-day heat wave, today’s temperatures were delightful for spending time outdoors celebrating the nation’s birthday.

was 1976 the last year that Easter Sunday was warmer than Independence Day?

also in 2019, this was one of those rare days where Central Park reached 90°, but Newark missed out on doing so (topping out at 89°). The case is very often the other way around, where Newark easily gets in to the nineties and Central Park only tops out in the (upper) eighties.

In 2021, the 4th of July was the third holiday in a row in which temperatures were recovering from an unseasonably cool day or two before. Easter, April 4, had a pleasant high of 65 degrees two days after a biting cold high of 39 degrees. Memorial Day, May 31, had a high of 70 after two rainy and windy days with highs of 51. July 4th’s refreshing high of 79 was thirteen degrees warmer than the high of 66 the day before. On all three holidays, cloudy skies in the morning cleared to beautiful blue sunny skies in the afternoon.

when was the last time Easter was warmer than Independence Day before 2017?