A heavy shower moved through between 9-10 PM, dumping 0.25" of rain - the first measurable rain to fall on this date in 16 years.

Two periods of heavy rain fell during the PM hours.  The first occurred between 4-6 PM when 0.74" fell; four hours later an additional 0.73" fell between 10 PM-midnight.

For the first time since June 22 the temperature fell into the 60s.  It occurred during a drizzly, breezy evening.  The nineteen consecutive days with low temperatures of 70° or warmer was the fourth longest streak since 1950. 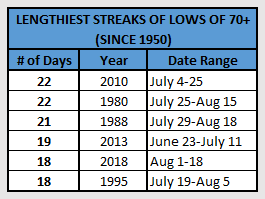 For the life of me I can't remember that day in 90" but good grief that day must
Have felt great,not to mention more spring like...I wonder if that was an el niño
Year? Hmm.keep it going fry...

Well it was not an el Nino year 'twas la Nina
http://apollo.lsc.vsc.edu/classes/met130/notes/chapter10/elnino.html

also in 2013, this was the only July, in the years since 1900, that the first eleven days of the month all had lows of 70° or warmer. the overall record for this occurrence happened in 1872 when the first thirteen days of July all had lows that were this mild.