The high reached a stifling 98°.  (It appeared this would be the hottest reading of the year, but then on Sept. 11 the mercury soared to 99°.)  This was the day I became an uncle for the first time, as my nephew Corry was born in New Jersey (he shares the birthday with his father).  He'd become used to celebrating his birthday in scorching heat.

A thundershower between 1-2 AM produced 0.14" of rain, the first of twelve days of rain in the next fourteen.  A total of 7.44" of rain would fall in Central Park during this wet two-week period.  Also, today's high of 93° was the eighth 90-degree reading of the past ten days.

0.37" of rain fell in ten minutes during an evening thunderstorm (7:37-7:47 PM).  The storm was triggered by a cold front that brought relief after three 90-degree days; today's high was 92°.  The downpour (which dumped 0.89" over three hours) disrupted the opening of the third evening session of the Democratic Convention held at Madison Square Garden.

For the third year in a row the high was in the 90s on this date.

This was the hottest day of the summer as the high reached 102° after a low of 84° (the warmest morning low on record).  The high was a record for the date.  This intense heat was produced by the same high pressure system that broiled Chicago for five days and resulted in the deaths of 750 residents. 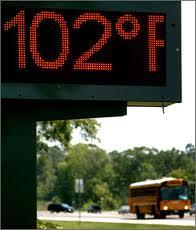 For the fifteenth day in a row temperatures were below-average in what became one of the coolest Julys on record (only two days had above-average readings).  During this fifteen-day period temperatures were five degrees below average.

For the ninth day in a row the low temperature was either 71° or 72°.  (The average during these days is 69°.)  During these nine days there were seven different high temperatures, ranging from 83° to 91°.

And the temperature was 68 or 69 degrees for a 20-hour period, beginning shortly before 1PM on July 14 and continuing thru daybreak on July 15.