An evening thundershower that dropped 0.11" of rain was the first measurable rain on this date since 1952.  Also, with a high/low of 96°/76°, this was the hottest day of the year, based on mean daily temperature.  (Although 5/29 had a high of 97°, its low was two degrees milder than today.)

After a steamy afternoon high of 94°, an inch of rain poured down in a 60-minute period during an early evening thunderstorm between 6:40-7:40 PM.

A torrential rainstorm dumped 3.36" of rain tonight between 10PM-1AM.  Incredibly, 2.09" fell in just one hour (10:19-11:19 PM).  On this night I was attending a performance of Macbeth when the skies opened up shortly after intermission.  Soon, the rain was falling so heavily that it began dripping onto the stage!  When the play was over many of us hesitated going out into the deluge, but theater management wouldn't let us linger.  This was the biggest 24-hour rainstorm since 3.20" fell on Aug. 16-17, 1993.

The high temperature soared to 98°, and was one of nine days this month with a high of 97° or hotter.

The afternoon high of 86° was the warmest reading of the month, the coolest July maximum temperature on record.

A cold front moving into hot and very humid air triggered severe thunderstorms across the metro area in the middle of the afternoon (and a funnel cloud formed over New York Harbor).  In Manhattan, nearly two inches of rain fell between 2:30 and 3:30, which exceeded the 1.95" of rain that fell during the first sixteen days of the month.  Before the storm struck, the temperature had risen into the upper 80s and the heat index reached 100°.  For the entirety of the storm, 2.22" was measured in Central Park, which was three times as much as what Kennedy Airport had, twice as much as Newark received and 40% more than what fell in the rain gauge at LaGuardia.  In the past six days nearly four inches of rain fell. 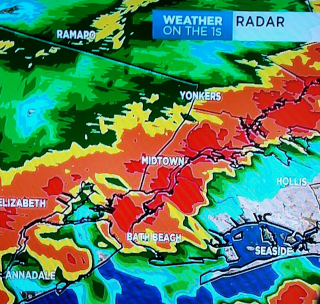 A severe thunderstorm between 8-9 PM dumped more rain (1.14") than what fell in the previous three weeks (0.99").  Earlier in the day, sauna-like conditions prevailed as the dew point reached the mid-70s, the temperature rose to 93° and the heat index reached 105°.  It also appeared today would be one of those rare summer days with a low of 80°+, but when tonight's storm moved in the temperature dropped to 73°.  Rain continued after the initial storm, adding 0.68", making this the wettest day of the year.  This moisture was from the remnants of what was hurricane Barry, which flooded Louisiana earlier in the week.  This was the second tropical storm named Barry to drench NYC; the first was in June 2007, when nearly four inches of rain fell.

Regarding the comment about the rainstorm on this date in 2001, although 0.62" fell during the entire day this amount was from three separate showers: one before daybreak, one in the afternoon (which produced the 0.50" I mentioned) and one that occurred an hour or so before midnight. My observation was about an individual rainstorm and not the day's total rainfall.