Just ten days after a tremendous short-duration deluge flooded the City with three inches of rain in an hour, another one occurred today at daybreak.  Of the 2.21" of rain that fell from 5:15 to 7:45 AM, almost all of it (1.91") was concentrated in a 30-minute period.

0.81" of rain fell in the two hours between midnight and 2 AM this morning.

Today and each of the past three days had highs of 89°.

Beginning today and continuing through Aug. 11, nearly ten inches of rain would fall.  2.30" of rain fell today, much of it before 8 AM. 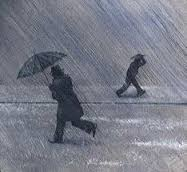 Twenty-nine of the past thirty-two days had below average temperatures.  Twenty days had highs below 80° during a time of the year when highs are typically in the mid-80s.

Today's high of 87° was one degree above yesterday's high, two degrees warmer than two days ago, and three higher than three days ago.

A high of 83° broke a 19-day streak with highs that were 85° or warmer.  This was the fourth longest streak in the years since 1940.  However, another streak continued as today was the 28th day in a row in which the high was 80° or warmer.  This was still well behind the longest such streak, which was 59 days in the summer of 1944, but it would continue and eventually break the record.