After today's rainfall of 1.20", only 0.22" would fall for the rest of the month (and none from 9/10 thru the first week of October) - but September's rainfall would be more than what fell for the entirety of August (1.07").  Today's rain was associated with what was left of the season's first tropical storm.

With winds out of the northeast, it was a cool Labor Day, with a high/low of just 69°/55°, ten degrees below average.  This was the coolest Labor Day in the 1970-2022 period (based on mean temperature).  The one saving grace was that skies were sunny.

Although "meteorological summer" (June 1 - Aug. 31) ended yesterday, Mother Nature paid no mind as the mercury soared to a steamy 95°.

Today was the Saturday of Labor Day weekend, and the high of 90° was the first 90-degree reading to occur during the holiday weekend since 1998.  This was also the nineteenth, and last, 90-degree reading of the year (the average number is eighteen).

Although Hurricane Ida, which made landfall in Louisiana four days earlier as category 4 storm, had weakened to a tropical depression by the time it made its way to the Mid-Atlantic, the energy that remained packed quite a punch after merging with a cold front as New York was flooded by extreme rainfall and lashed by tropical storm-force winds (causing greater disruptions than tropical storm Henri did less than two weeks ago).  After a first round of moisture brought light showers shortly after sunrise, there was a lull until 5 PM when heavy rain moved in, becoming torrential a few hours later.  By midnight, 7.13" had been measured in Central Park – comparable to seven weeks worth of rain, and two-and-a-half inches more than a typical September sees in its entirety.

At its most intense, between 9-10 PM, more than three inches poured down.  Because of this excessive rate of rainfall, the National Weather Service, for the first time, issued a Flash Flood Emergency for NYC, and subway service was suspended throughout the City.  Shockingly, the City suffered 13 flood-related fatalities.  Unlike Henri, which wasn’t a wind producer, Ida’s visit was accompanied by winds that gusted between 35-50 mph.

Between Aug. 21 (when Henri moved in) and today, 15.99" of rain was measured in Central Park.  And between June 30 and today, 29.19" fell - which is 20 inches more than the amount that typically falls during this nine-week period. 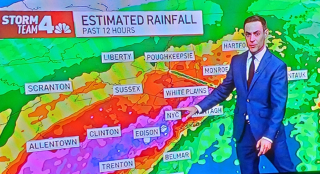 In a complete reversal from last year, skies were clear and the humidity in mid-afternoon dropped to 22%, which was just the fourth time this century that the humidity level in September was at or below 25%.  It was also a warm day, with a high of 86°, which was warmer than the warmest reading of the past two Septembers (both at 85°). 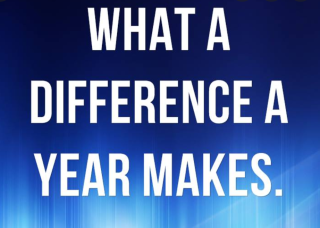 The rather turbulent summer of 2021 culminated with two hurricanes smashing New York. August 21, 2021, (Henri) is now the sixteenth rainiest day on record. September 1, 2021, (Ida) is the fifth rainiest day on record. September 2021’s first day had more rain than the first day of any other month (the previous credit went to October 1913). This brings to mind how April 30, 2014, had more rain than the last day of any other month. In my fifteen years here, I thought Ida was worse than Hurricane Irene in 2011 and the remnants of the tornadic storm in late April 2014.

This year now has two months in which a major weather event occurred on the first day: February’s big snowstorm and September’s heavy rain. I find this interesting because the first day of most months is usually uneventful.